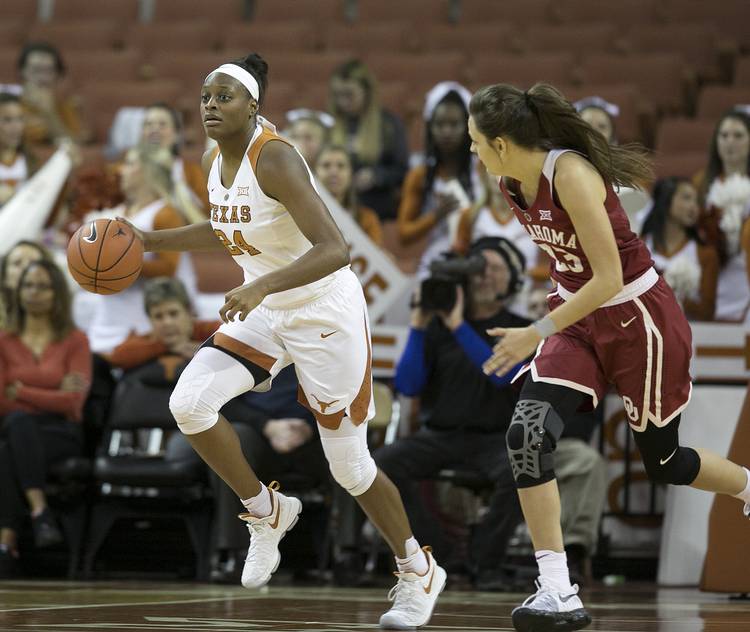 Texas's Joyner Holmes moves the ball past OU's Maddie Manning during the first half of their game at the Frank Erwin Center on Tuesday, January 17, 2017. DEBORAH CANNON / AMERICAN-STATESMAN

LUBBOCK, Texas (AP) — Joyner Holmes scored 13 points and grabbed a career-high 15 rebounds to lead the No. 12 Texas women to a 77-57 victory over Texas Tech on Saturday night for its 12th straight win.

Texas extends its program-best Big 12 Conference start to 8-0. The Longhorns opened conference play 5-0 three times, the latest during the 2015-16 season.

The win also moved head coach Karen Aston past Gail Goestenkors in wins at Texas. Her 103rd victory at Texas put Aston in second place behind Jody Conradt. Conradt had 783 wins as the head coach of the Longhorns.

Brooke McCarty had 14 points and Ariel Atkins added 13 for Texas (14-4, 8-0), which swept the season series against Texas Tech (11-7, 3-4) for the fourth consecutive year. It was Texas Tech’s first home loss of the season.

“We were very focused,” said Aston. “Texas Tech hasn’t lost a game here this year. For us to come in and handle our business the way we did makes me really proud of our kids.”

Holmes had a double-double for the second game in a row, her fourth of the season.

The Longhorns shot 43 percent while Texas Tech struggled from the field, connecting on just 35 percent of their shots. Texas also outrebounded the Lady Raiders 50-38.

Texas had a double-digit lead late in the first quarter and built a 42-26 halftime lead. The Longhorns had their largest lead, 74-47 with six minutes to play.

After McCarty opened the game with a 3-pointer, the Longhorns never trailed.