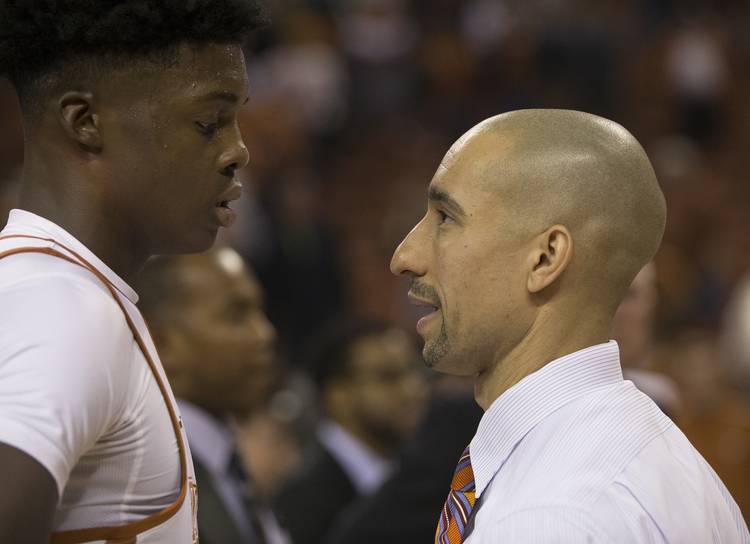 Spend any time around the Texas basketball team, and it becomes obvious this doesn’t seem like a group that’s given up despite five straight losses.

Granted, when it’s all said and done, this is likely to be a crummy season strictly from a win-loss perspective. Texas (7-12, 1-6 Big 12) turned in a few clunkers under Bob Weltlich, Tom Penders and, yes, even Rick Barnes.

Coach Shaka Smart knew when he took the job this would be a rebuilding year, having lost six key scholarship players. Oklahoma coach Lon Kruger probably had a similar vibe for his Sooners (8-10, 2-5).

No, this wasn’t what ESPN or Big 12 officials had in mind when they scheduled a Texas-OU basketball showdown for this week’s “Big Monday” broadcast.

But the simple fact that the Longhorns feel they are still headed down the right path gives them motivation to keep going.

“For us right now, our guys have shown a lot of growth individually and collectively,” Smart said after Saturday’s 79-67 loss at No. 2 Kansas. “That’s obviously not correlated with winning, which is what you’re trying to do each time you take the floor. What we want to do is be more consistent.”

Smart actually felt pretty upbeat about his bunch while walking out of Allen Fieldhouse. Texas has been competitive in every game this season. Little mistakes here and there have led to losses.

The Longhorns are 1-5 in games decided by three points or fewer. That’s not the mark of a team that’s given up by any stretch. That’s the record of a young team learning how to eliminate careless errors and close out victories.

The Jayhawks jumped out to an early 19-5 lead thanks to a horrific start by the visitors. But Texas actually righted the ship as the game wore on and outscored Kansas 62-60 the rest of the way.

How many UT fans back home turned off the TV thinking the Horns would get blown out? It was back to a four-point game with 13 minutes, 43 seconds left in the second half.

Asked if he’d like a do-over for the first five minutes, Smart flashed a huge grin and said, “Would love one. Doesn’t work that way.”

Texas players actually feel good about their play against the last three opponents, all Top 10 teams. In that span, Jarrett Allen averaged 19.3 points and 12 rebounds while shooting 71 percent. Andrew Jones averaged 15.7 points and hit 8 of 19 shots from 3-point range.

Shaq Cleare’s solid senior season continues; he’s averaged 12.3 points the past three games. Eric Davis Jr. has reactivated himself, and Kerwin Roach Jr. is getting the ball inside more.

“We’ve just got to keep playing,” Cleare said Saturday. “We’ve got another game that we could go ahead and win. We’ve got to flush this one against a top team in the country. We’ve just got to get ready for Oklahoma.”

Davis said staying positive is easier said than done, but “there’s a lot of basketball left. We can’t just give up the season.”

“Let’s not be in the film session saying, ‘Dang, I wish I would have done this better,’” Davis said. “Let’s have a good feeling. Everybody wants to win — that’s clear. Just keep fighting. It’s going to work out for us. We’re not going to sit here and hope for it. We’re going to continue to attack.”

On the surface, it would appear that Texas is actually playing better without suspended swingman Tevin Mack. It’s still unclear when or if he will return after an undisclosed violation of team rules. But statistically speaking, the team’s scoring, shooting and rebounding totals have either remained the same or ticked down since Mack got benched.

It’s widely known this team needs a point guard, a problem being addressed through recruiting. Four-star guard Matt Coleman from Oak Hill Academy in Virginia has committed to UT.

The Longhorns could use more shooters, and they’ve got more of those coming, too. By all accounts, junior transfer Dylan Osetkowski (6 feet 9, 250 pounds) will be a dynamite addition next season. He’s sitting out per NCAA transfer rules after arriving from Tulane.

So there is help coming, and if Allen decides to stay for his sophomore season, then the Horns will really have something cooking.

“Even though we’re young, that’s no longer an excuse,” Jones said. “We can play with these guys. There’s just a few little things that we can fix defensively and we’re right there. I feel like the second half of conference should be better.”