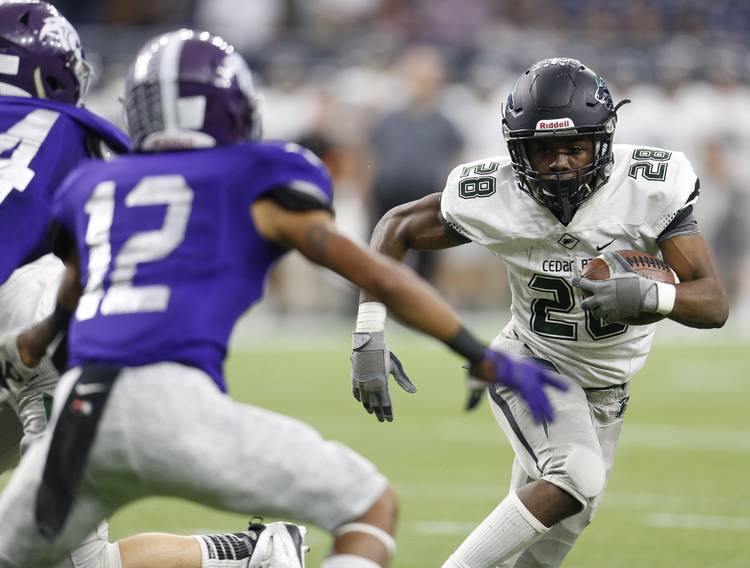 Coaching Christmas is approaching, the time of year where all the coaches around the country sign their next generation of toys. Tom Herman wasn’t given much time in the workshop, as he took the Texas job only two months away from national signing day.

Despite the clear struggles of recruiting top-level talent in two months when most programs have more than two years, Herman kept most the class that the inherited together while plucking pieces that he was already familiar with during his time at Houston.

The Longhorns aren’t done shopping at a few positions. Recruiting numbers are fluid, but Texas should sign a class of around 20 players. That leaves five spots left. In this week’s Dotted Line, we dissect where Texas stands at each position in the 2017 class and look at the early offers for 2018 at the running back and defensive tackle positions.

Texas locked up its quarterback for 2017 two years ago. Ehlinger, a local star at Westlake, was always headed to Texas if an offer came his way. That happened the summer before his junior year after a championship performance in the state 7-on-7 tournament. An all-state season followed and Ehlinger became a household name. Ehlinger’s dual-threat ability gives him a shot to earn playing time as a freshman. He’s already enrolled at Texas and will participate in spring drills.

Herman’s staff received an early gift when a number crunch forced Carter to open his commitment from Georgia. As an early enrollee, He didn’t have much time to pick his destination. A product of Langham Creek in the Houston area, it didn’t take Carter longer than a day to choose the Longhorns. With D’Onta Foreman’s departure, snaps are open at running back. Carter has a chance to make an early impression in the spring. Young was once committed to Houston and played for UT assistant coach Corby Meekins at Westfield before Meekins took a job under Herman at UT.

Texas clearly wants another wide receiver to add to the class. The staff made a push to flip Omar Manning and/or Charleston Rambo, but both stayed committed to their respective schools. That left the Longhorns scrambling for another option. UT hosted Pouncey last weekend and seemingly made up ground, but Miami is still the favorite. Denton High’s Chris Miller has emerged as a name to watch, but Baylor appears to be the favorite. Gardiner, currently committed to Missouri, might be the most realistic option. He’s 6-5 and a matchup nightmare on third down and in the red zone. The Kemp product was recently visited by Ohio State.

Herman moved quickly to fill needs at tight end. Charlie Strong’s move to the air-raid made tight end a non-priority for the previous staff, but Herman’s offense requires tight ends to create mismatches against linebackers and safeties. Herman notched two pledges from versatile players with upside. Leitao is a former basketball player with size and athleticism. Brewer was possibly the best pass-catching tight end in the state over the past two years at Lake Travis. He’ll play H-Back at Texas and draws comparisons to former UT tight end David Thomas.

Kerstetter was committed to Oklahoma State when Herman took the Texas job. An offer from Texas quickly came Kerstetter’s way, and it didn’t take long for the San Antonio product to flip his commitment due to his strong relationship with Herman’s staff from their time at Houston. Kerstetter played left tackle in high school, but will likely move to guard or center in college. Zabie, a Westlake product who was forced to miss his sophomore and senior seasons, possesses upside. At 6-6 and 300 pounds, Zabie has unique athleticism for an offensive lineman even though he’s raw as a player due to the lack of varsity experience. UCLA hosted Zabie last week on late notice, but Texas should get his final official visit before signing day.

The Longhorns lost a commitment when it was learned Lagaryonn Carson wouldn’t qualify. He was a top-10 talent in the state and was a big loss to UT’s class. Current commit Taquon Graham has visited TCU and plans to visit Oklahoma before signing day. Keeping Graham is as important as gaining new pledges at the position. Texas decided against pursuing defensive tackles, instead focusing on a pass-rushing specialist in Chaisson and a several bigger defensive ends with the ability to play head-up with offensive tackles. Johnson and Jones are scheduled to visit Austin this weekend, per 247Sports. Porter, a Colorado State commitment, could flip with a Texas offer. Same could be said for Henderson.

Johnson is arguably the most important player in the class, at least in the short-term. The Dodge City C.C. product was ranked the top JUCO linebacker in the nation and fills an immediate need for defensive coordinator Todd Orlando. Texas wants to be aggressive and fast. Johnson is both of those things. He also can play middle linebacker, allowing Malik Jefferson to move to a more natural outside position. Bimage played defensive end in high school and likely needs a year or two to make the transition to linebacker. The position has enough talent with Johnson joining the fold for Bimage to develop.

Herman inherited two solid players for the class in Boyce and Thompson. Texas is searching for a third cornerback to add to the class. The Longhorns hosted Calloway and Vincent the past two weekends, but are longshots to secure either player. Calloway is expected to pick Arkansas, while Vincent is committed to LSU. The realistic option is Guidry, who was committed to Houston until Herman left for Texas. The former Cedar Park star is scheduled to decide between Utah, Arizona State and Texas on signing day.

The safety position needs to improve, but the potential at the position is already on campus. Estell was a two-way star at Hooks. Most schools recruited him as a wide receiver and Estell could easily land at that position once he hits campus. Estell committed to Strong with the notion that he’d get to play defense and nothing appears to be different under Herman. Estell is a long, rangy safety who should excel in pass coverage due to his success at wide receiver.

Rowland has the opportunity to make an immediate impact in 2017. A good kicker goes a long way to becoming a consistent football team; Rowland was the No. 1-ranked JUCO kicker in the country. He’s missed only one extra point in two years and has a long field goal of 44 yards.

Texas has only three offers to prospects in the 2018 class and it makes sense for the staff to be picky in this cycle. Chris Warren III and Kirk Johnson have at least two years left on campus, and Kyle Porter showed he could handle carries in 2016. Texas should sign two running backs in the 2017 class, so running back shouldn’t be one of the top priorities for 2018. That doesn’t mean Texas won’t sign one elite prospect, though.

The three offers are to out-of-state prospects. Pledger is a five-star running back who already holds offers from most of the blueblood programs in the country. USC is the early leader for the 5-9, 188-pound speedster.

Gill is a four-star prospect from Ohio. The Texas staff is familiar with him due to Tim Beck’s time at Ohio State. Convincing Gill to leave Ohio will be a hard task, but Texas wants its name in the running with the top prospects early in the cycle. The same challenge lies ahead to get Lingard, a five-star prospect, out of Florida.

I am blessed to receive another scholarship offer from University of Texas 🙏 #VFND pic.twitter.com/gKD0CcT9RC

Texas elected to pass on a defensive tackle for 2017, which makes the position an area of need in 2018. The Longhorns extended five early offers, three to in-state stars. The best player of the bunch is from Florida, however. Vincent is a five-star prospect with freakish athleticism for a player carrying nearly 300 pounds. He’s a top-10 player in the country and will have his choice of schools.

The Longhorns were busy in Missouri and handed out a handful of offers to younger prospects. One of those was Trout, a large tackle capable of demanding double teams. He’s a four-star product who stands 6-4 and already carries 300 pounds. Missouri is the early favorite.

The in-state offers are all four-star prospects. Coburn, who played for Meekins at Westfield, is the highest-rated of the bunch. He’s a one-technique who stands at 6-1, 326. Avery and Brown are national top-300 prospects.