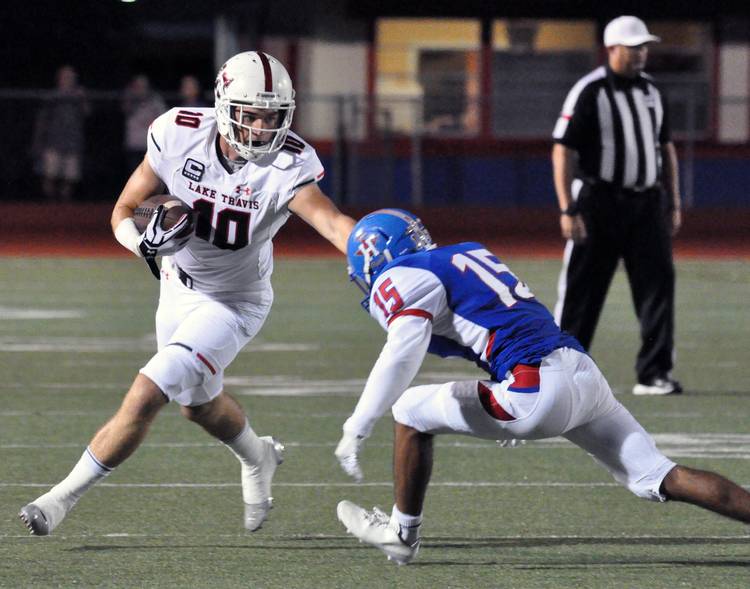 Cade Brewer had a decision to make. Tom Herman had taken the Texas coaching job and offered Brewer, who had been committed to SMU since April 2016.

When he was at Houston, Herman had recruited the Lake Travis tight end, but never offered. Now an offer was being extended from the University of Texas.

“It was a special moment for me and I knew I had a tough decision to make,” Brewer said. “I grew up attending UT games and knowing the tradition at the school from living around Austin. It was a big moment. It would’ve been hard to pass that up.”

For most high school players, an offer from their hometown team is the highlight of the month. But Brewer had bigger goals, and they kept him from deciding quickly: Lake Travis was on a state title run. Recruiting could, and would, wait.

“When I got the offer, I knew some things would change. It’s Texas,” he said. “This was going to be a tough decision if I wasn’t going to SMU. A week after I received the offer, I had narrowed it down to Texas, but we were still playing football and on a mission to win state. It had to wait.”

The Cavaliers won the Class 6A Division I state championship on Dec. 17. Brewer de-committed from SMU a week later. On the same day, he made his commitment to Texas official. It was two days before Christmas.

“It was a relief,” Brewer said. “I talked to my family and we made the decision. Recruiting can be stressful at times, but it is such an honor to receive scholarship offers and to know you’ll get a college education for playing football. That makes it all special,” Brewer said. “At the same time, recruiting adds a lot of time. There is always a lot going on, so I’m happy it’s over with.”

Being familiar with Herman and his offense made Brewer’s decision easier. Herman’s offense at UH meshed with what Lake Travis runs. In fact, Herman and former Lake Travis head coach Chad Morris, who is now the head coach at SMU, spent time together exchanging ideas when Morris was the offensive coordinator at Clemson and Herman was the offensive coordinator at Ohio State.

Brewer knows his route to Texas was partly determined by schemes.

“Coach (Charlie) Strong’s offense didn’t use the tight end in the passing game that much and scheme is important, especially for a tight end,” he said. “I’m not going to a place that doesn’t fit my strengths and a team isn’t going to recruit you if your skills don’t match — Wisconsin would be a bad place for me. Coach Herman likes to use his tight ends in much the same way we did at Lake Travis. I’ll get to line up all over the place, and that fits my skill set.”

That skill set began to emerge during Brewer’s junior season. After barely making a dent on varsity as a sophomore, he blossomed in 2015. As a junior, Brewer caught 51 passes for 813 yards and 14 touchdowns; Lake Travis fell in the state title game to Katy. With a renewed purpose, Brewer caught 64 balls for 856 yards and 14 touchdowns as a senior.

“We were embarrassed in the loss against Katy and it was our job to make it right,” Brewer said. “We knew we had a good team. Lake Travis has had a lot of success and our coaches gave us a lot of confidence. We didn’t show leadership in the Week 1 loss to Converse Judson. That woke us up, especially on offense because we played bad against Judson.”

“It was great. We went out to eat and hung out with future and current players. I’m excited to get there and I’m excited for the challenge,” Brewer said. “My main goal before arriving on campus is to add weight because extra weight will help me improve as a blocker. I’m around 213 pounds right now and I’d like to be somewhere around 225 pounds by the time I enroll this summer.”