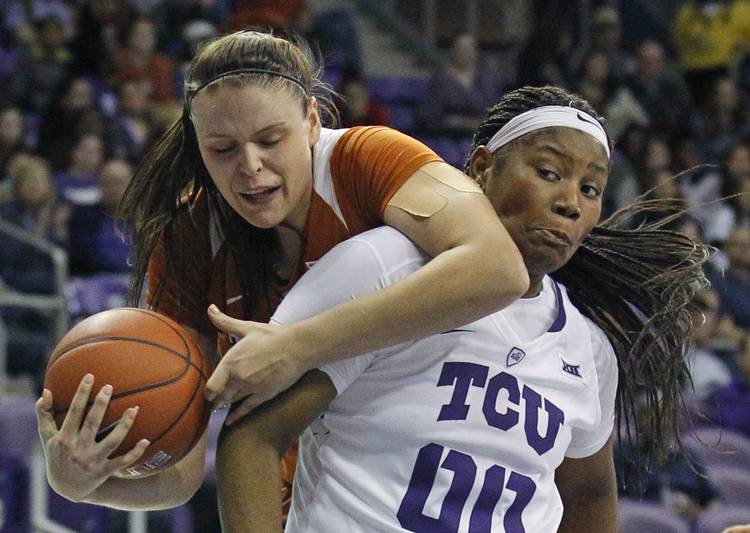 Texas center Kelsey Lang (40) grabs a rebound over the shoulder of TCU forward Amy Okonkwo (00) in the first quarter of an NCAA college basketball game in Fort Worth, Texas, Wednesday, Jan. 25, 2017. (Paul Moseley/Star-Telegram via AP)

FORT WORTH — Life moves at a deliberate, slower pace in sleepy Cowtown. Here, longhorns normally stand idle. The Longhorns, the ones from Austin, somehow get lulled to sleep, too.

The nation’s 12th-ranked team, which came in riding a 12-game winning streak, looked awfully mortal at Schollmaier Arena. “We went to the zoo today,” Aston said, explaining how the team spent the day leading up to a rare 8 p.m. tipoff. “Maybe that wasn’t a great idea.”

Turning Ariel Atkins loose after halftime seemed like a stroke of genius, though. The junior from nearby Duncanville drew two charges, slapped the ball loose twice and scored 14 of her 17 points to help UT pull out a 77-69 win.

“They come for us hard,” said Atkins, one of several visitors who looked relieved more than exuberant. “They’re a good basketball team. They’re confident. They have a game plan and they stick to us.”

Joyner Holmes had 15 points, 14 rebounds and converted on a terrific move in the paint with 2:50 left. Her three-point play gave Texas (15-4, 9-0 Big 12) a seven-point lead. Atkins followed with clutch 3-pointer at the top of the key, which served as a tranquilizer dart for the scuffling Horned Frogs (10-10, 2-7).

“You can’t get Ariel get going from her defense,” TCU coach Raegan Pebley said, “and that’s where I think she was able to impact Texas.”

Lashann Higgs made a season-high seven field goals en route to 14 points. Brooke McCarty did her usual thing by directing traffic, getting 14 points and drilling three shots from downtown.

All in all, it was a total team win, one that typically brings teams together. Texas has now won 13 straight and holds a perfect record halfway through league play, a first in program history.

As great as it sounds, Aston headed home feeling flummoxed.

“There were just a lot of moments that were unusual for us,” she said. “Situations weren’t good. We work on situations a lot, like last-second stuff. We just weren’t real mentally there for 40 minutes, and you have to be in this league. I thought we were just a little bit too up and down.”

For years, TCU was nothing more than UT’s sparring partner in women’s basketball. Coach Jeff Mittie landed the first real blow in February 2014 with a stunning home win and then bolted for Kansas State. His replacement, Pebley, followed with a left hook as the Frogs walloped the Horns again the following year in Fort Worth.

Those were TCU’s only two wins in 41 previous meetings in the all-time series. Number three certainly seemed possible.

Amber Ramirez gave the Frogs a one-point lead with a 3-pointer shot from her hip. TCU had only two other field goals in the final 6:59 of the first half. The visitors couldn’t exactly run away with it, though. During that same stretch, the Longhorns made only four of 14 shots.

After Higgs air-balled a 3-pointer just before the buzzer, it felt like Texas needed to regroup.

On the opening possession of the third quarter, Atkins scored and then ran down to the other end and drew a charge. In the final period, Atkins went on a personal 7-0 run sparked by her on-ball defense. Her 3-pointer from the left corner gave UT a 67-60 lead with 4:59 to play.

“I wasn’t disciplined at all on defense, and like coach said, when I watch the film, I’m going to see it,” Atkins said. “I knew I had to go out and be more disciplined and be the player I am.”

Texas players act like the burden of this winning streak is no burden at all. Maybe so. In this league, all wins should be celebrated, be they sloppy or not. Oh well. On to the next one.

“We come out flat a lot here,” Aston said. “But again, I say all of that, but TCU is playing for things, just like we are. We won against a team that I feel like is playing good basketball.”

The Dotted Line: What’s left in the 2017 class for Texas?