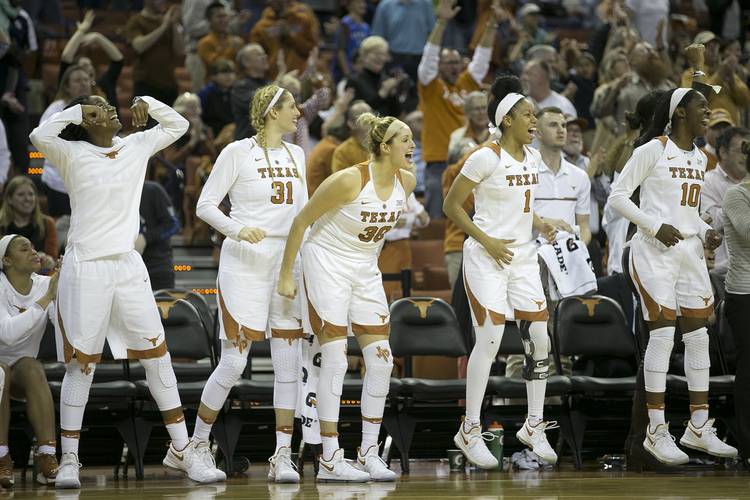 There are no statistics to measure a basketball team’s maturity. Aston, though, said the Longhorns have clearly improved in that area after starting the season 2-4.

“When I look back at the Lubbock game, I thought we handled things very maturely,” the fifth-year Longhorns coach Tuesday.

Maturity has been a constant theme with this year because the Longhorns boast six players who had never played in a Big 12 game. Texas has grown into a cohesive group during its 12-game winning streak. This is the first Longhorns team to open a conference season with eight straight wins.

Aston credited her “older players” with helping the newcomers weather a tough start to the season. Although there isn’t a rah-rah individual in the bunch, she said seniors Kelsey Lang and Brianna Taylor and juniors Ariel Atkins and Brooke McCarty have been effective leaders.

“Brooke is absolutely better at opening her mouth,” Aston said. “They’ve taken the young players under their wings. You still might not hear them. But you can see (maturity) when they pull someone to the side and try to mentor them.”

Texas benefits from having a lineup without any apparent ego problems. Six different players have been the leading scorer in UT’s 18 games. The Longhorns average 24 points a game from their bench, compared to 15 for their opponents.

“Anybody off the bench can drop 20 or 16 (points),” Taylor said. “It is just part of our team. It shows the character of the team knowing that everyone has a role to play. I think that will gel us more as a team as the year goes on.”

Texas has shown maturity while going 4-0 on the road during this winning streak. Although the Longhorns had one slip-up — a 66-54 victory at unheralded Kansas — they had dominating performances at Iowa State, West Virginia and Texas Tech. Those three teams have a combined home record of 31-6.

Texas Tech was 10-0 in Lubbock before McCarty, Atkins and Joyner Holmes combined for 40 points and 21 rebounds as UT downed the Lady Raiders 77-57.

Holmes has developed into a freshman sensation during Big 12 games, averaging 13.1 points and 8.8 rebounds during league games. Alternating between the forward and guard positions, she collected a season-high 15 rebounds against Tech to help the Horns gain a 50-38 rebounding edge. Three of her four double-doubles have been in conference games.

“I’ve been talking to Joyner about rebounding for as long as I’ve known her,” Aston said. “I told her that the more she has the ball in her hands, the more of an impact she’ll have in the game.”

Holmes has helped take pressure off Lang, a 6-5 post and UT’s only returning front-court player from last season’s 31-5 team. Lang is tied for third in the Big 12 with 8.5 rebounds a game.

Adversity shaped Stephan Zabie’s career, but ‘it’s crazy how good he got’