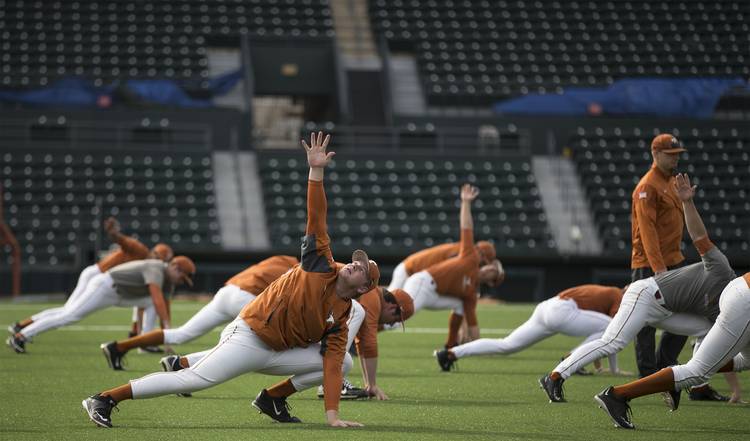 If you’re wondering what’s new at UFCU Disch-Falk Field this spring, the answer is plenty.

First off, the home of Texas’ baseball team has new turf and a new look in the outfield. There are 11 freshmen on the roster. There’s also new head coach David Pierce, who took over a program that had been led by Augie Garrido since 1997.

Texas is fewer than three years removed from an appearance in the NCAA College World Series. The Longhorns mustered only a 30-27 record in 2015, though, and a 25-32 campaign in 2016 marked only the fourth time since 1970 that the team failed to reach 30 wins.

“We’ve been saying this a lot, but these past few years have been pretty embarrassing. Very embarrassing, actually,” said senior pitcher Morgan Cooper. “We’re not going to make excuses. The best nine guys, whether it’s a freshman or a senior, we’re going to go out here and play and we’re going to play our hearts out.”

Garrido was reassigned after the 2016 season, and Pierce was lured away from Tulane. Among Pierce’s first tasks at Texas was renovating the cavernous Disch-Falk Field. The notable aspects of Pierce’s ballpark blueprint called for shortening the outfield gaps and the lowering the fence in left field.

The changes should boost an offense that totaled 34 home runs in 2016. A more-aggressive approach on offense also will help.

On Friday, Clemens relayed a story about his new coach’s philosophies. During a fall scrimmage, Clemens drew a 3-0 count with two outs in an inning so he awaited a sign from assistant coach Sean Allen to take the next pitch. Clemens waited and waited, but Allen kept giving him a green light to swing away.

“We’re here to rake,” Clemens said. “We’re not afraid of anybody. There’s no more play for one run, we’re playing to score every single inning. That’s kind of our mindset now.”

Infielder Bret Boswell and outfielder Zane Gurwitz told media members they’ve observed some differences during the short amount of time that the team has spent in the renovated ballpark. The Longhorns pitchers also have noticed.

Cooper, who is set to be the team’s starter for Friday games, didn’t allow an earned run in four of his six appearances at home in 2016. As a team, Texas yielded at least five runs in 12 of their 34 games in Austin. The pitching staff endured 13 such outings over 23 road games.

“It will probably make a difference,” Cooper said. “Some balls in the past that have hit the wall are going to go out, but the mentality as a pitcher is they’ve still got to hit it.”

With the start of practice, Texas began a three-week countdown to the beginning of the 2017 season. The Longhorns’ alumni game is scheduled for Feb. 4. Texas will then play its season opener against Rice on Feb. 17.

Shaka Smart working harder behind the scenes with individual Longhorns