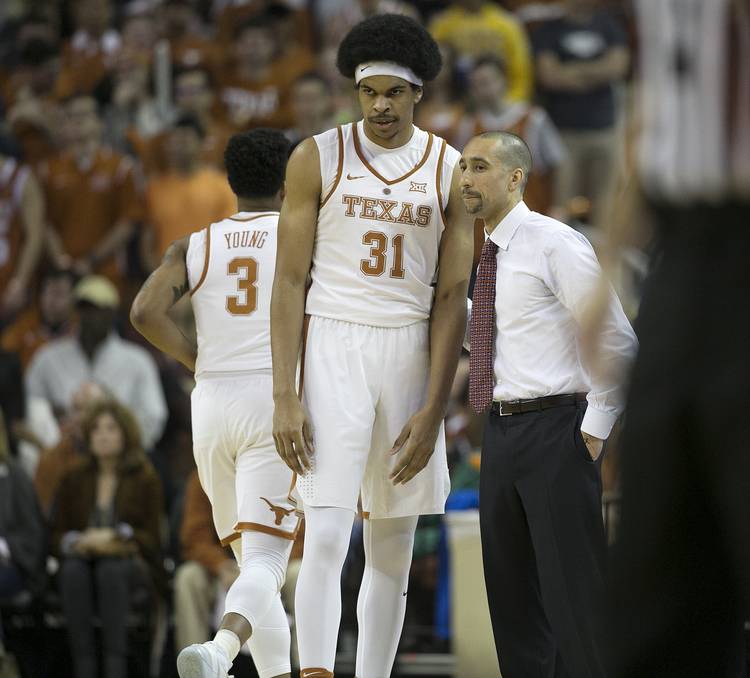 Texas freshman Jarrett Allen talks with coach Shaka Smart during their game against Oklahoma during the first half at the Frank Erwin Center on Monday, January 23, 2017. DEBORAH CANNON / AMERICAN-STATESMAN

This has been a unique season for everyone associated with Texas basketball.

Most of the players have winning backgrounds. They were stars in high school. To them, losing is a foreign concept.

Longhorns coach Shaka Smart has won 70 percent of his games in eight seasons as a head college coach. He’s nine wins shy of 200 career victories. With six NCAA Tournament berths and one Final Four appearance on his rèsumè, Smart isn’t accustomed to losing, either.

Monday’s last-second victory over Oklahoma provided a much-needed jolt for the Horns, but Texas still carries an 8-12 record going into Saturday’s non-conference game against Georgia. It’s one of 10 games scheduled for the Big 12/SEC Challenge, a made-for-TV spectacle.

Smart opened up this week about what he’s been doing behind the scenes to keep his players’ spirits up during what’s been a grueling January.

“Just trying to breathe life into these guys and help them understand,” Smart said. “What’s been helpful for me is that I got this advice from (author) Ryan Holiday to focus on the very, very short term, so like today and what we need to do to get better.

“And then also, focus on the very, very long term, which is where we ultimately want to go as a program and with these guys individually, what we want to help them become.”

Smart said he’s been focused on spending more individual time with the players.

He typically goes through a 30-minute film session with Andrew Jones. He spent 45 minutes on the phone this week with James Banks and the freshman’s mother. Smart said he personally works out with transfer forward Dylan Osetkowski, who is sitting out this season after arriving from Tulane.

Smart also wants to avoid any negativity creeping into Jacob Young’s head. The freshman has started the past four games but is now shooting 22 percent from 3-point range.

“He really, really wants to play well,” Smart said. “He’s a good player and a good shooter. We want him to focus on all the things he can control.”

Big 12 teams have gotten into the NCAA Tournament with losing records, but realistically the Longhorns must get hot immediately for that to happen.

More than anything else, Smart wants his players to stop riding the emotional roller-coaster. “Overall, our team has to get better at not getting too high or getting too low,” he said.

That’s what makes the Georgia game fascinating. Will this be a team fired up after a thrilling win over OU? Or has that energy dissipated in the past few days as the Longhorns venture into a strange environment to face a team they know little about?