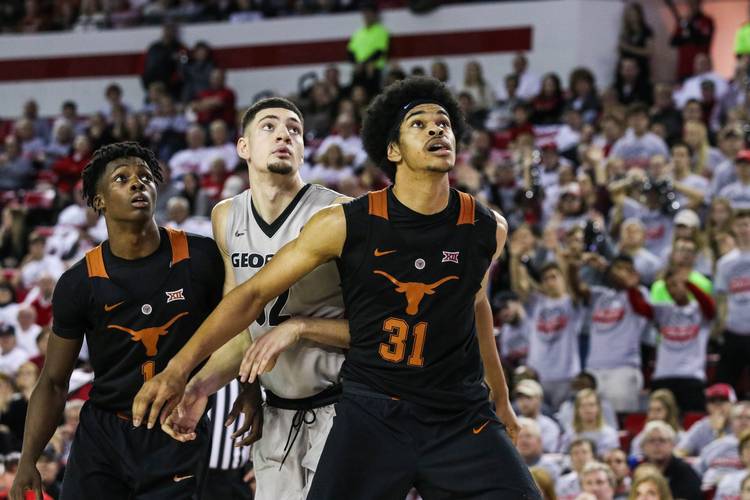 ATHENS, Ga. — Just last Monday, Texas coach Shaka Smart was laughing about how basketball is a make-or-miss game. He ended the week bemoaning how heartbreaking that statement truly can be.

Andrew Jones electrified the Erwin Center crowd Monday with a scintillating 3-pointer to knock off Oklahoma. On Saturday, Jarrett Allen watched a midrange hook shot — an opportunity the Horns will take all day long — literally get halfway home and then reverse course and squirt out.

This time, it was the Georgia fans who were delirious as the Bulldogs escaped with a 59-57 win at Stegeman Coliseum in the Big 12/SEC Challenge.

“I was in the perfect position to throw the hook shot,” said Allen, who had only four points in 28 minutes. “It felt good leaving my hands. It just … didn’t go down.”

Georgia’s Yante Maten, who scored 21 points, got his hands up on Allen and felt a tad helpless as the ball sailed over his head.

“I’m not going to lie to you. I thought it was good,” Maten said. “How it came out out of his hands, it was about near halfway down when it popped out. I was just blessed it didn’t go in.

The J.J. Redick curse continues. Texas is now 0-4 all-time wearing black uniforms, a streak that started with a miserable blowout against No. 1 Duke on Dec. 10, 2005. Why Nike won’t burn those things is anyone’s guess at this point. Black uniforms with burnt orange lettering and trim? Blech.

What’s worse, this year’s team is now 2-6 in games decided by three points or fewer.

Just like the Michigan loss in December, another last-second, black-uniformed debacle, Texas will fly home knowing it could have easily won in SEC country.

“To win winnable games, you have to make one or two more winning plays,” Smart said. “Those are things we talk a lot about with our team.”

The Longhorns (8-13, 2-6 Big 12) gave up a nine-point halftime lead with stunning ease. Shaq Cleare picked up his third foul just 10 seconds after the break, and Georgia opened the period with a 10-2 run. Jordan Harris’ 3-pointer from the right corner tied things up at 41, and the 10,029 fans were at full volume.

Texas had seven turnovers in the first half and seven more after the break. The Horns missed 14 of 20 shots from 3-point range and six more at the foul line.

Look at this odd stretch midway through the second half: Jones scored on a driving layup and drew a foul with 12:42 remaining. Texas took only five shots over the next 5:04. Allen missed; Jones was called for traveling; Kerwin Roach Jr. missed and then picked up an offensive foul.

“We’ve been in this situation enough that we can’t wait until after the game to say, ‘We should have done this, and we should have done that,’” said James Banks, a Georgia native who played 23 minutes before a huge throng of family members, including his mother.

“At halftime with a nine-point lead, we have to learn how to play with it,” Banks added. “Maintain our focus with a clear mind, maintain playing for each other.”

The Horns got back within two on Davis’ free throw with 38 seconds left, and Georgia nearly put it away. J.J. Frazier missed a short jumper, and it appeared Derek Ogbeide got the loose ball and scored. However, officials took another look and ruled a shot-clock violation.

That set the stage for an ending similar to the OU game. But instead of Jones bringing the ball up, Roach had those duties. He found Allen in the paint. The 6-foot-11 freshman just couldn’t get it to go down.

Different town, different conference. But it’s the same story, same ending. Texas will get back to league play Wednesday at home against Texas Tech.

“We had every opportunity to win this game,” Jones said. “We just didn’t do the little things that went into winning.”