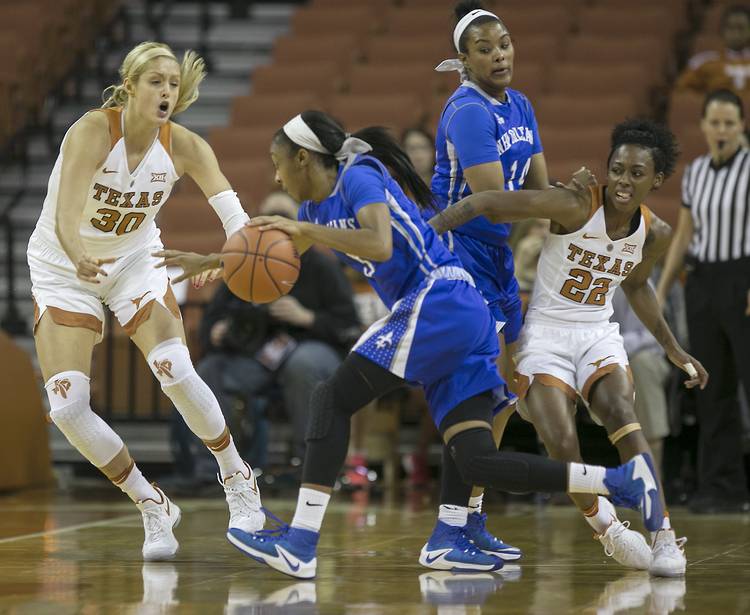 If the NCAA women’s basketball tournament tipped off this week, Texas would be a No. 3 seed and play first- and second-round games at home.

Longhorns coach Karen Aston noted that it’s too early to print tickets today — the NCAA tournament doesn’t start until March 17 — but that projection does give Texas (15-4, 9-0 Big 12) a chance to see where it stands on the national landscape.

The 12th-ranked Longhorns have put themselves in a good position to earn home games in the NCAAs for the second straight year. Heading into Sunday’s home game against West Virginia, Texas has won 13 straight games after opening the season 2-4.

Aston said the Longhorns were “rewarded” for their current winning streak and rugged nonconference schedule when the NCAA women’s selection committee unveiled its top 16 teams on Monday. The committee will release new top 16 selections on Feb. 6 and Feb. 20.

Ranked 12th in the latest Associated Press poll, Texas is No. 10 on the committee’s list of its top 16 teams.

“It was obvious that teams with tough nonconference schedules were rewarded, and some were penalized for not having one,” the fifth-year Longhorns coach said.

The NCAA, which revealed the top 10 selections periodically last season, has increased the total to 16 this year.

“The committee felt that the top 10 announcements were very successful last year in raising awareness and creating conversation around the game,” Terry Gawlik, senior associate athletics director at Wisconsin, said last week. “We wanted to continue that this season with the addition of increasing the reveal to include the top 16 seeds.”

UConn, Baylor, South Carolina and Mississippi State were the top seeds in the NCAA’s first unveiling.

Texas is unbeaten through the first half of Big 12 play for the first time. The second half of the conference schedule promises to be more difficult; the Horns have two games against second-ranked Baylor and road games against Oklahoma and Oklahoma State.

Aston said she and her assistant coaches often tell the players about the importance of being among the top four seeds in the NCAA Tournament. Last year the Longhorns defeated Alabama State 86-42 and Missouri 73-55 at the Erwin Center before heading to Bridgeport, Conn., for the Sweet 16.

Aston said veteran players such as seniors Kelsey Lang and Brianna Taylor and juniors Brooke McCarty and Ariel Atkins do not need to be lectured about the importance of gaining a high seed for the NCAAs. But the younger players need to be schooled on the subject.

“I learned a long time ago that if you assume they know something (about tournament seedings), that’s a terribly bad assumption because players don’t know anything, especially the freshmen,” Aston said.

“The other day Sug (Alecia Sutton) asked me what what the RPI (Ratings Percentage Index) was. This is when you rely on your older players to help them out.”

The 64-team NCAA women’s basketball tournament bracket will be announced on March 13.