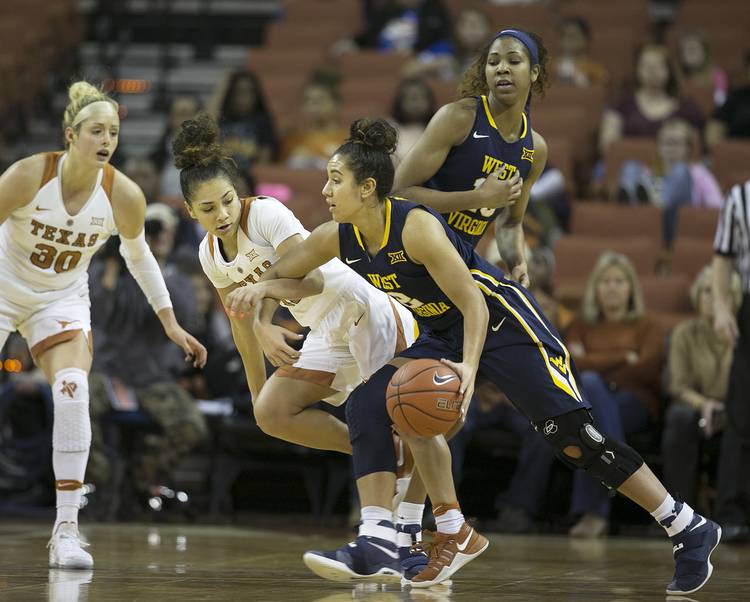 Texas was in danger of watching its now 14-game winning streak die until Brooke McCarty opened the fourth quarter with back-to-back three-pointers.

The 5-foot-4 point guard ignited a 12-0 scoring run to open the period. By the time Ariel Atkins hit a short jumper halfway through the quarter, the 12th-ranked Longhorns were on their way to a 69-54 victory over No. 22 West Virginia (16-6, 4-6 Big 12) Sunday afternoon at the Erwin Center.

Texas is 16-4 overall and 10-0 in conference play. The win moved the Longhorns in a tie with Baylor for first place.

Aston described it as a “team win” because so many players were involved. McCarty, a junior, scored 13 of her 15 points in the second half.

If anyone deserved special recognition, though, it was Lashann Higgs.

With Holmes sidelined nearly the entire half in foul trouble, Higgs, a sophomore, scored all 10 of her points before halftime to keep the Longhorns rolling.

Texas led 30-26 at halftime and never trailed for the remainder of the game.

Higgs’ contributions in the first half were “tremendous. Her energy and ability to make plays defensively were giant,” Aston said.

The former Cedar Ridge High School standout has averaged 10.5 points in her last six games, showing why she was a McDonald’s All-American. She deflected individual praise, saying she has learned to take practice “more seriously” in recent weeks.

“It’s just about trying to help the team the best I can,” Higgs said. “Just do what I can to the best of your ability.”

“When the game was close, Texas played harder than we did,” Carey said.

McCarty set the tone for the Longhorns, who outscored their opponents 21-9 in the decisive fourth quarter. Holmes followed with a medium-range jumper and Ariel Atkins hit consecutive shots to help UT improve its lead to 15 points in the fourth quarter.

“It was a matter of just going along with the feel for the game,” said McCarty, who scored only three points in the first half while WVU defenders covered her closely.

Aston noted that Texas relied on its frontcourt players. Texas owned a 28-22 advantage in points in the paint. That allowed McCarty to get better looks at the basket in the second half.

“She can defend, she can score from anywhere, she can do just about everything,” she said. “She brings an energy off the bench that we really need. … She knows her role, knows when to attack, knows when to give good defense. She brings so much energy, it’s such a good vibe.”

The Longhorns honored about 40 former players and coaches during the annual Texas Exes Day. Among the women who returned to the Erwin Center were Kim Basinger and Nancy Walling from the 1970s, Andrea Lloyd and Lyssa McBride Seale from the 1980s, Edna Campbell and Nekeshia from the 1990s, Brittainey Raven and Alisha Sare from the 2000s and Hall of Fame coach Jody Conradt.

Texas travels to Stillwater, Okla. on Wednesday to take on Oklahoma State and will return home Saturday against Kansas State. Tipoff is scheduled for 5 p.m. and the game will be televised on the Longhorn Network.