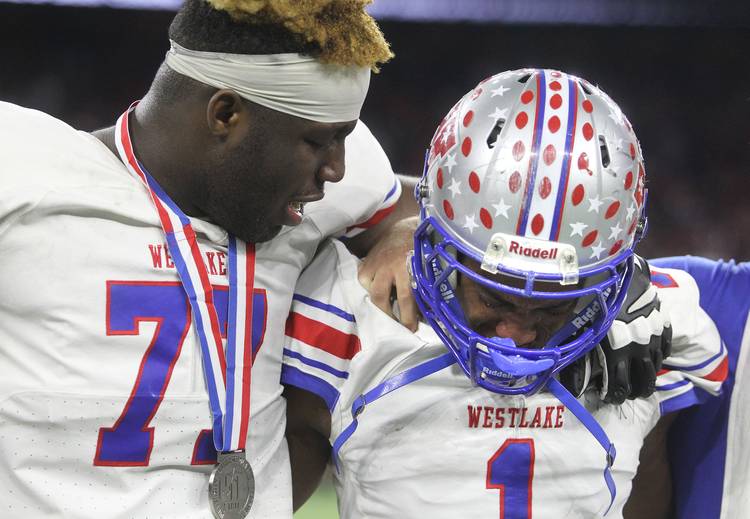 Westlake Stephan Zabie(77) and Chase Cokely(1) stand together after losing to Galena Park North Shore in the Class 6A, Division I state-title game at NRG Stadium in Houston Saturday, Dec. 18, 2015. (Stephen Spillman for AMERICAN-STATESMAN)

National signing day is knocking on the door. The bulk of the work for Texas is over. The Longhorns hold 15 commitments and expect to add a few more before closing the class. The class ranks No. 28 in the country and No. 2 in the Big 12, per 247Sports’ composite.

A few of the names remaining on the list are long-time targets of Tom Herman’s squad. With the commitment of Jav Guidry to Utah, and Monday’s flip of offensive lineman Samuel Cosmi from Houston, there are three targets the Longhorns are focusing on.

Chaisson was recently awarded a fifth star by 247Sports. The 6-4 pass rusher will make his decision at 11 a.m. Wednesday. It’s a two-team race for his services; LSU or Texas will pick up a defender capable of making an impact as a freshman.

The Longhorns are still considered the leader, but it isn’t the slam dunk many in the industry believed it was two weeks ago. LSU made up ground on his official visit to Baton Rouge, and the thought of playing defense in the SEC is always enticing for recruits. Chaisson’s commitment, whether to Texas or otherwise, signals a big moment for Herman and his staff. Locking down a five-star defensive end two months into the job would give the program momentum into the 2018 cycle. But a miss on the best remaining prospect in the state means the Longhorns have questions to answer on the recruiting trail in the next class.

A big, athletic tackle from nearby Westlake High School, Zabie’s name emerged as a target in mid-January after receiving an offer from Herman’s staff. He was ruled ineligible for his senior season, but his stock rose in the final month of this recruiting cycle.

He’s also received interest from Ole Miss and UCLA, but UCLA is the main threat to Texas. Zabie visited all three schools in the span of two weeks and is set to announce his decision Wednesday on ESPNU along with teammate Levi Jones. Texas’ lone offensive line commitment in 2017 — San Antonio Reagan’s Derek Kerstetter — will likely play guard or center in college. That means Texas wants a tackle to close out the class. Zabie is the definition of potential and a player Herman’s staff could groom to replace Connor Williams at left tackle.

Texas was considered an underdog to secure Pouncey. A visit to Austin on Jan. 20 put the Longhorns in the driver’s seat. Texas wants another receiver in the class to join Damion Miller, and Pouncey remains the best option.

He’s capable of playing outside receiver because of his height and length, and he’s also quick enough to play slot receiver. That versatility is what Herman’s staff likes most about the Florida prospect, per Pouncey. He’s a similar player to Omar Manning, who Texas recruited hard until he reaffirmed his commitment to TCU.