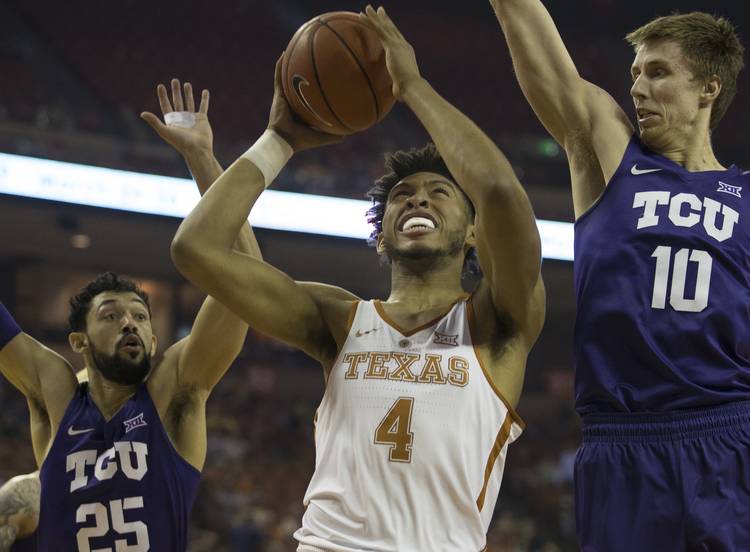 One of the best individual plays in Texas’ matchup with Georgia last Saturday came from freshman James Banks.

He collected a rebound on the baseline, hit a difficult jumper and drew a foul. Banks hit the free throw, completed the three-point play and gave Texas a one-point lead.

The Longhorns were pumped, of course. But the loudest applause came from the concourse, where multiple family members were sitting, including Banks’ mother Sonja.

Banks’ family hasn’t seen the 6-10 center play much basketball in person the last two years. He grew up in Decatur, Ga., but transferred to La Lumiere School in Indiana for his senior season. The Texas-Georgia game was as close to a home game as it gets for Banks’ family and friends.

They whooped and hollered as Banks played 23 minutes, one shy of his season high, and scored five points and grabbed four rebounds.

“It was fun knowing that people who I knew and loved were in the stands and cheering for me,” Banks said. “A lot of my family haven’t even seen me play in high school. So for a lot of them to come down, it was a big deal for me, especially before the game.”

Banks is a unique character, and one that could be a key contributor in years to come. Strictly from a personality standpoint, if you mixed Jarrett Allen’s talent with Banks’ comedic timing, he’d be the face of the UT program. His gregarious nature is infectious, and Banks simply can’t stay quiet.

While he looks the part of a major college athlete, Banks didn’t even start playing basketball until his freshman year in high school.

“I was the bag boy, basically,” Banks once told 247Sports. “I didn’t really get a chance to practice with the guys. I didn’t start for my (junior varsity) team, I barely played for my JV team.”

All anybody knew was that Banks was a rare athletic specimen. He got bumped up to varsity for the state playoffs as a freshman and the competitive juices started flowing. From that point on, he made a commitment to develop his game.

As a junior at Mount Vernon Presbyterian School in Georgia, Banks averaged 23 points and 14 rebounds. His numbers dipped at the more competitive La Lumiere; he averaged just six points and eight rebounds as a senior.

Still, he was ranked the nation’s 64th-best prospect in the 2016 recruiting class, according to 247Sports. Texas coach Shaka Smart loved Banks’ high upside and jump-out-of-the-gym potential.

Banks got a first-hand glimpse of major college basketball even before he enrolled at UT. Both Banks and Allen qualified for the Team USA Under-18 squad that competed in Chile last summer. Smart was the team’s coach, but made it clear than Banks wouldn’t have been chosen if he wasn’t ready.

“James has a really bright future,” Smart said. “We’re talking about a guy who just really started playing basketball in high school as a freshman in high school and doesn’t have the same depth of experience that some of his freshmen teammates have from the standpoint of playing games and practices.”

To get there, he spends extra time working with forward Dylan Osetkowski, who is sitting out this season per NCAA transfer rules. Smart said Banks “gets more extra workouts and extra lifts than almost anybody else on the team.”

As the season progresses, Banks is adding to his basketball IQ. He was on the baseline against Oklahoma for the game’s final possession. He tipped the inbound pass just enough so that the Sooners couldn’t get a clean look at a potential game-winning shot.

For now, Banks has the perfect role as the third forward, backing up Allen and Shaq Cleare. All he needs to do is give the Horns an energy shot whenever he enters the game. Get a rebound, a block, knock the ball loose, hustle on defense.

“In terms of his role offensively, I think he’s getting better,” Smart said. “You don’t always see it in the game, but he’s making a lot of progress. He’s gotten a lot better shooting the ball. I think he can become a very reliable mid-range shooter. He can become a good free throw shooter.”

Banks is simply scratching the surface of how good he could be for the Longhorns.

“As someone who wants to do extra,” Smart said, “James is constantly working.”