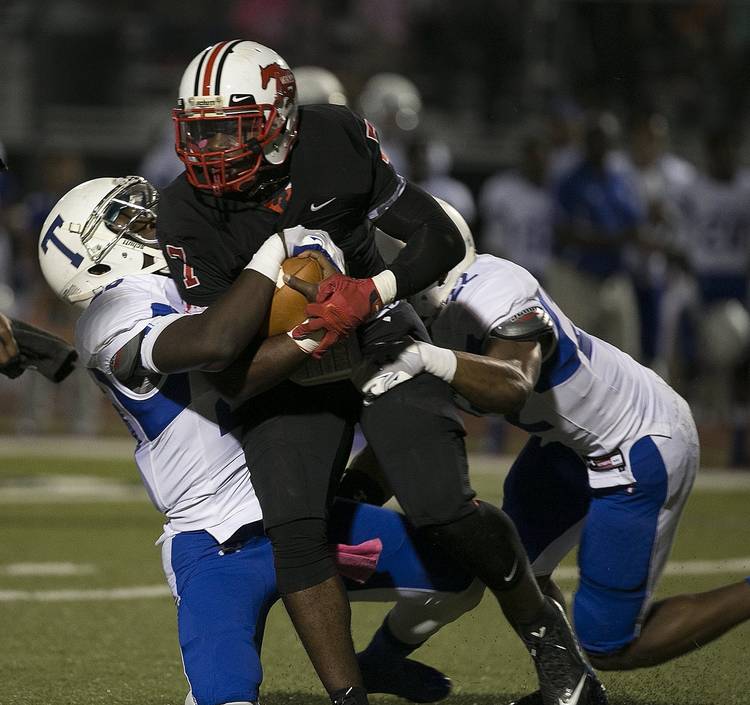 Manor's Jamall Collins is tackled by Temple's Travell Latouche, left, and Ashton Logan during a football game in 2015. Logan signed with Baylor on Wednesday. (Photo by Deborah Cannon/ American-Statesman)

OU methodically put together its best class since finishing fourth in 2010. It’s the only group from the Big 12 in the top 25. Seven players from the American-Statesman’s Fab 55 list of top state recruits and 12 players from the ESPN 300 are on the way to Norman. With the early departures of school record-setters Samaje Perine (Hendrickson) and Joe Mixon, running back was a priority, and it was addressed with the signings of Kennedy Brooks, No. 33 on the Fab 55, and Trey Sermon of Marietta, Ga. Brooks ran for 6,387 yards at Mansfield over the past two years.

Nuggets: Three four-star wide receivers were signed: CeeDee Lamb (Richmond Foster, No. 11 on the Fab 55); Charleston Rambo (Cedar Hill, No. 32 on the Fab 55); and juco addition Marquise Brown. … Lamb tore up Dripping Springs in a Class 5A state quarterfinal with five TD catches and 215 yards. … Chris Robinson, No. 28 on the Fab 55, is a pro-style QB from Mesquite Horn. … Eleven players enrolled early. … The 27-man class has nine players from Texas after just three last year. … One huge defection was Rivals.com five-star ILB Jacob Phillips, who flipped to LSU.

Granted, Tom Herman didn’t have much time, but it was a letdown to have no big finishing kick to a class rated 29th by Rivals.com and 33rd by ESPN. WR Jordan Pouncey and juco DT Jamari Chisholm — the only two late gets — rate 13th and 18th, respectively, among 18 UT signees in the 247Sports composite rankings. Westlake QB Sam Ehlinger, No. 14 on the Fab 55 and 119th nationally in the 247Sports composite, is the highest-rated Longhorn. There are six Fab 55 players, including RB Toniel Carter (No. 20) and speedy WR Damion Miller (No. 24).

Nuggets: The average player rating of 87.51 is 19th in the 247Sports composite, but the small size of the class keeps the overall ranking lower. … This was the first time in memory Texas did not sign a top-10 state player nor a top-100 national player. … Gary Johnson, the No. 1 juco ILB, might move to safety because of his size. … Herman touted RB Daniel Young as one who might outpunch his three-star weight. … Late four stars who got away: DE K’Lavon Chaisson (LSU); Westlake OT Stephan Zabie (UCLA); and CB Chevin Calloway (Arkansas).

TCU hauled in perhaps its best back-to-back classes ever, coming off a No. 22 ranking in 2016. It grabbed four Fab 55 players, four of the top 35 in the state, headlined by WRs Jalen Reagor (No. 17) and Omar Manning (No. 23). A third wideout, Lakendrick VanZandt, is a Scout four-star. A late flurry enhanced the class. CB Noah Daniels picked TCU over Notre Dame and Oklahoma. DT Corey Bethley turned down Texas A & M and OU. California CB Michael Onyemaobi had offers from most Pac-12 teams and Nebraska. Florida DT George Ellis III spurned Charlie Strong and South Florida.

Nuggets: QB Shawn Robinson, No. 18 in the Fab 55, guided DeSoto to a state title. … OG Wes Harris (Aledo), No. 34 on the Fab 55, is expected to push for immediate playing time. … WR Kenedy Snell, Reagor’s teammate at Waxahachie, runs the 100 in 10.6. … TCU is great at mining Louisiana for three-star talent, which this year includes DE Dennis Collins, WR Al’dontre Davis and S Garret Wallow. … There’s just one juco in the 21-man group.

Mike Gundy’s classes rank between 30 and 40 nearly every year, which is good for the Big 12. This group was put together a long time ago and was borderline top 25 entering the year but suffered defections to Texas, Texas A&M, Texas Tech and Baylor. Three of the top-four signees are wide receivers: Under Armour All-American Tylan Wallace, No. 27 on the Fab 55; Shamond “LC” Greenwood, No. 44 on the Fab 55; and Lamarcus Morton, an ESPN four-star. All are Texans.

Nuggets: Patrick Macon, the No. 4 juco ILB, is a key addition at a position of need. … Juco OT Arlington Hambright could crack the two-deep immediately. … Chuba Hubbard is a Rivals four-star RB from Canada with sprinter’s speed who’ll run track. … Jelani Woods is a 6-7, 230-pound QB project from Georgia. … Ten of the 21 players are from Texas.

Considering where the Bears were in late December, they must feel as though they won the lottery. They went from one recruit on Dec. 27 — three-star S Jalen Pitre (Stafford) — and a No. 106 ranking to 27 signees and a top-40 slot Wednesday. Rivals has Baylor 32nd. The new staff flipped a dozen players, including their top signee, Rivals four-star OG Xavier Newman (DeSoto), a Colorado commit. Baylor flipped WRs R.J. Sneed from Ole Miss, Trestan Ebner from TCU and Gavin Holmes from Iowa. Each are ESPN four-stars.

This is Tech’s lowest ranking since 78th in 2008, perhaps because of Kliff Kingsbury’s hot-seat status. The Red Raiders do have one claim to fame. They were the only Big 12 school to sign a top-10 player in the Fab 55. Frisco OG/C Jack Anderson also is the highest-rated Big 12 signee in the nation (76th). Tech’s top-three four-year signees are offensive linemen, a weak spot last year. Three juco DBs could be rushed into action to shore up the nation’s worst defense. CB Octavious Morgan is a Scout four-star and the No. 15 overall juco player.

Nuggets: Eleven of 19 signees are early enrollees and nine are jucos. … Hendrickson DE Nelson Mbanasor, who switched from Oklahoma State, is one of the early entrants. … ILB Riko Jeffers (Garland Sachse) and two jucos, Dakota Allen and Tony Jones, will help the LB corpse. … With Patrick Mahomes leaving, Tyler JC QB McLane Carter was brought on board, along with Cibolo Steele’s Xavier Martin. … Only one WR was signed, Bronson Boyd, and he’s already been booted from the team.

Nuggets: Nine players are from SEC country but, surprisingly, there’s no one from Ohio, a favorite WVU stop. … Three-star OT Kelby Wickline is son of offensive line coach and ex-Longhorn co-OC Joe Wickline. … Tevin Bush (New Orleans) is the kind of quick scatback (5-8, 170) the Mountaineers like to deploy. … WVU needs a starting QB and didn’t sign one, but Dana Holgorsen said he expects Florida transfer Will Grier to be the guy.

Did you expect anything else from a Bill Snyder class? After redshirting most of the 22 signees, as usual, they’ll end up beating your favorite Big 12 team one day. K-State was one of the youngest teams in FBS in 2017. Important gets were Rivals four-star ILB Daniel Green of Oregon, Trinity Valley juco All-American LB Da’Quan Patton (Vista Ridge) and Oklahoma high school S Gervarrius Owens.

Nuggets: Giddings WR Chabastin Taylor is a 6-4, 208-pound, big-framed receiver who played wildcat QB for the Buffaloes. He could eventually thrive at KSU. … Half of the Cats top eight-rated signees are defensive ends, led by Anthony Payne. … DeSoto three-star S Isaiah Stewart was a late add.

Difficult to see how this class will move the meter much. A pair of juco transfers, ex-Washington State QB Peyton Bender and RB Octavius Matthews, are highlights of a 20-man class. Matthews de-committed from Auburn last week and was considering Tennessee and Louisville. RB Dominic Williams (Frisco Independence), a 5-8 speedster, is a Rivals four-star. There are five wide receivers for a team that had trouble scoring.