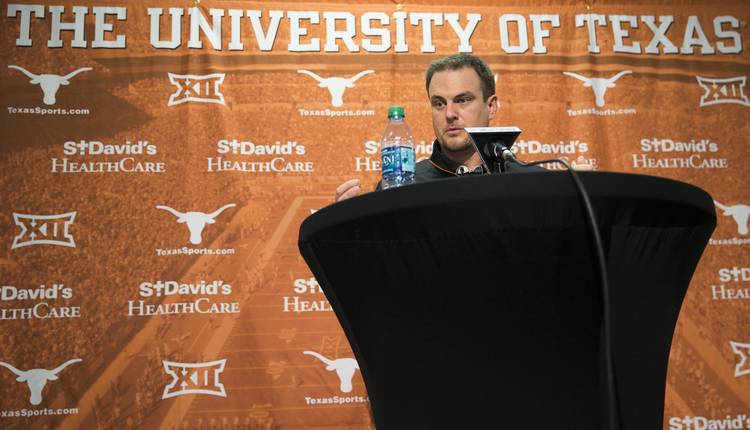 Tom Herman brought along some familiar faces to his first signing day in Austin.

Among the 18 signees in Texas’ 2017 recruiting class were three players who originally pledged to Herman while he was the head football coach at Houston. Linebacker Marqez Bimage, offensive lineman Samuel Cosmi and running back Daniel Young each chose Wednesday to wear burnt orange instead of scarlet red in college.

While meeting with reporters, Herman was asked what had changed since he took over Houston’s program after a three-year run as Ohio State’s offensive coordinator. In January of 2015, Herman stated that he would not immediately recruit any Ohio State pledges. Two years later, Herman said he didn’t chase those potential Buckeyes out of a respect for ex-boss Urban Meyer.

Herman explained that he told his staff at Texas that they could make scholarship offers to Houston recruits while the Cougars did not have a head coach. After Major Applewhite was hired as Herman’s replacement on Dec. 9, the Longhorns could only chase the Houston recruits who had backed out of their commitments to the Cougars.

“We offered these kids scholarships, basically, when the University of Houston had no head coach, and I felt OK about that,” Herman said. “It had nothing to do with my previous quote. My previous quote was in regards to my relationship with Urban Meyer … Things change. I don’t know that anybody should ever be held to a quote they said years and years ago in a different circumstance and a different context.”

Herman’s statement, though, does not line up with the recruiting timeline of Cosmi, who announced he had received a scholarship offer from Texas on Jan. 26.  247Sports reported his de-commitment from Houston four days later, and he pledged to the Longhorns on the same day.

Editor’s note: This article originally stated that Sam Cosmi was offered a scholarship by Texas on Dec. 26, 2016. He received that offer from the Longhorns on Jan. 26, 2017.