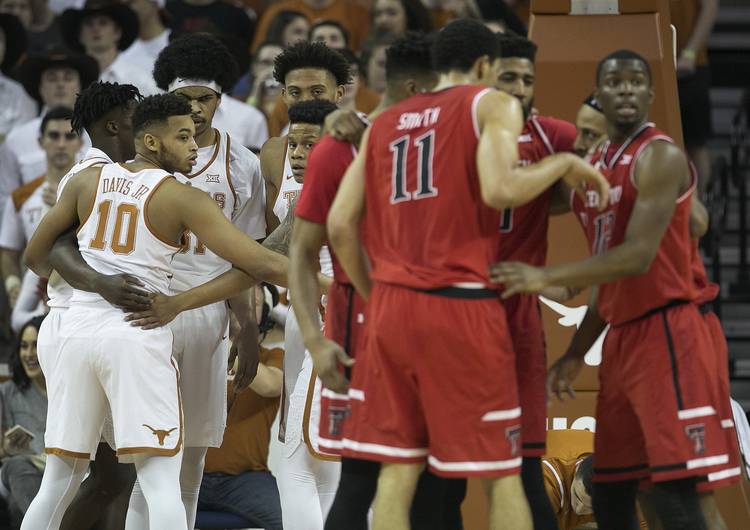 Texas guard Eric Davis (10) believes the Longhorns are getting closer as a team despite struggling through this season. Davis had 15 points in a 62-58 win over Texas Tech at the Erwin Center on Wednesday, February 1, 2017. DEBORAH CANNON / AMERICAN-STATESMAN

The Longhorn that drilled a corner 3-pointer with 28.8 seconds left Wednesday against Texas Tech was the Eric Davis Jr. that Texas fans expected to see all season long.

Heck, he expected to be that guy, too.

The moment was just how Davis drew it up in his mind. Big shot, big moment, big game, big crowd. Well, OK, as big as crowds get in the usually half-empty Erwin Center, anyway.

Davis first scored on a terrific driving, twisting layup. Then, he set up shop in the right corner, near the Texas bench, caught a ball from Kerwin Roach Jr. and swished a shot that led to a 62-58 win.

“These type of games are fun. This is what you come to college for,” Davis said after his 15-point performance and fourth straight night in double figures. “I know me personally I was definitely looking forward to games like this. Be in the moment, enjoy the moment. I’m out there having fun.”

“Coach is telling us in the huddle to believe,” Davis said.

This time, Texas, a team that’s 2-6 in three-point games this season, found the escape hatch. Jarrett Allen scored on a scintillating reverse layup, Davis did his thing and Andrew Jones hit a free throw with 6.3 seconds left to give the home team a four-point cushion.

It helped that Tech, the second-best shooting team in the league, missed its last eight shots. The Raiders made only six of 21 shots from 3-point range and shot a season-low 35.6 percent overall for the night.

“Give Texas a lot of credit,” Tech coach Chris Beard said. “Tonight, they had a different poise about them in the last four or five minutes.”

Allen had 19 points on 8 of 11 shooting and pulled down eight rebounds. Jones had 11 points, a total that now qualifies as a quiet night for him, along with seven assists. His two inside looks for Shaq Cleare powered a 10-2 run early in the second half.

But it was Davis who continues to breathe some much-needed life into the Texas offense.

Before the season started, Davis thought this would be his breakout year. He didn’t expect to go 4 for 11 against Eastern Washington or 0 for 8 against UT-Arlington. “There’s some steps there in between you and Buddy Hield,” said UT coach Shaka Smart, referring to Oklahoma’s former superstar guard now in the NBA.

An 0 for 4 showing against Arkansas was probably rock bottom. He had terrible body language, got jerked out of the game and chewed out on the sideline. Smart said Davis had a “woe-is-me” mentality.

The smile Texas fans saw last year is back in full force. Is that solely because the ball is going through the hoop? “Little bit of that,” Davis said. “Just being around these guys, too, man. They’ve had the utmost confidence in me from day one.

“I struggled early on in the season, kind of finding myself. But just being around them, they’ve been great teammates, especially this knucklehead right here,” he added, nudging Jones. “But definitely, I appreciate these guys, seriously.”

That’s all Smart has ever wanted. Trust your teammates, believe in the process. Now, it would appear Smart can count Davis among the disciples.