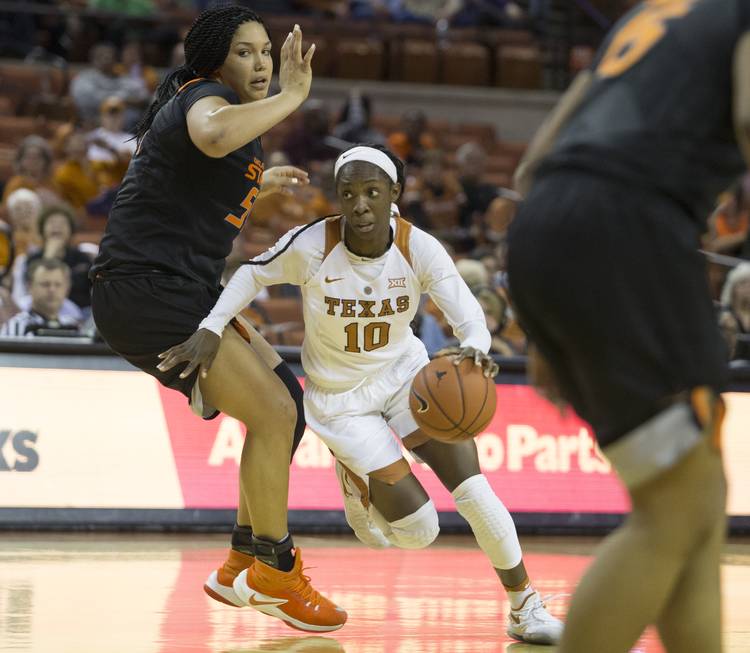 Lashann Higgs was unaware that she’d committed an oral hygiene blunder. In front of TV cameras, no less.

During last week’s 69-54 victory over West Virginia, she blocked her first shot of the season and lost her mouthpiece moments later. She scooped it off the floor during a scramble for the ball, inserted it back into her mouth, and outraced everyone across the floor to score a driving layup.

Fox Sports 1 caught the sequence and replayed it over and over. The play showcased her quick reflexes and natural speed.

It was certainly a positive memory during the basketball team’s 15-game winning streak. Or was it?

Higgs has not seen seen the FS1 replay, even though countless friends have relayed the story to her. “I must have been going on just adrenaline.”

Coach Karen Aston joked that Higgs must have beaten “the five-second rule.”

“It doesn’t take Lashann long to do anything, so I’m guessing it wasn’t on the floor very long,” Aston said.

Higgs has had more highlights than just grabbing her mouthpiece off the court. In the last eight games, she’s averaging 9.9 points to become one of UT’s most reliable players off the bench. She has begun to show some of the sparkle that made her a McDonald’s All-American in high school.

Higgs doesn’t shy away from big-game pressure. In last year’s NCAA Tournament, she averaged 10.2 points in UT’s four games, including a team-high 19 points in a season-ending 86-65 loss to eventual champion UConn.

Despite those breakout moments, there are times when Higgs hasn’t shined. Yet she still ranks second on the team in field goal percentage (.522) and third in steals (22).

Higgs admits she’s in a constant battle to remain positive. Aston repeatedly tells her to trust her natural ability and don’t let outside distractions hinder her game.

“There have been some dark moments when she’s really gotten down on herself, and I’ve had question marks on whether she was going to overcome some mental setbacks,” Aston said. “Most of it is when she beats herself up over when she makes a mistake. Her (recent) growth has come from here persistence and her willingness to not quit on herself or her team.”

Higgs said she agrees with Aston’s assessment “to some extent.”

“Sometimes as a player, you get caught up in the thought that you have to do everything perfectly,” she said. “I’m now realizing when you do that it tends to lead to more mistakes. … So when you become comfortable with your mistakes and learn from them, that’s when you grow as a player.”

Higgs said the team has grown up after starting the season 2-4. Losing only to ranked teams — UConn, Stanford, South Carolina and Mississippi State — toughened the Horns up for conference games. The team’s preseason goal of reaching the Final Four next month remains intact.

Aston describes Higgs as an “energy person,” and the 5-9 guard relishes that role.