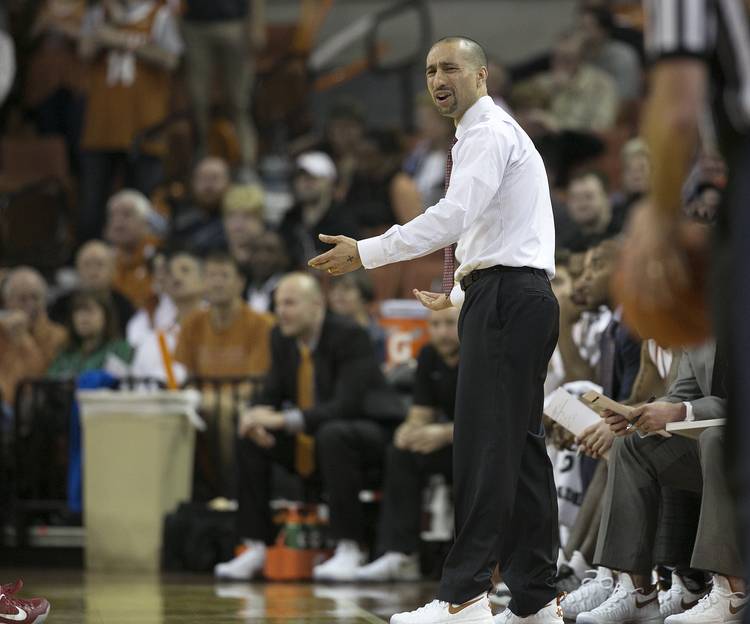 Texas coach Shaka Smart reacts to a call during their game against OU during the first half at the Frank Erwin Center on Monday, January 23, 2017. DEBORAH CANNON / AMERICAN-STATESMAN

The Texas men’s basketball team has only 10 guaranteed games remaining. Normally at this point, the Longhorns would be looking at NCAA Tournament projections and trying to get themselves ready for March.

Not this year, though. The grim reality is the Horns, with a disappointing 9-13 overall record, will be lucky if they reach the postseason at all. Texas is tied with Texas Tech and Oklahoma State for the seventh, eighth and ninth spots in the Big 12 standings.

So here at the midway point of league play, what constitutes success moving forward?

“Two things,” Texas coach Shaka Smart said. “One, as a team, we have to continue to play more for each other and help each other more on the floor, be the best we can be.”

The second point is more specific. “Solid on defense, take care of the ball and make our free throws,” he said.

Smart hasn’t totally given up on the NCAAs just yet. The Longhorns will get one more chance at the Big 12 tournament in Kansas City. Yes, anything is possible.

“For us, we have to do less worrying about that and more focusing on the last question,” Smart said. “I’ll tell you this, if we’re able to do that stuff, then it’s a lot more realistic.”

Here’s a look at what’s working and what’s not with nine regular-season games remaining, starting with Saturday’s trip to TCU:

1. Jarrett Allen’s overall improvement: The 6-11 freshman has this calm, easy-going demeanor that can be a tad disconcerting at first. But over time, you learn what a fascinating thinker the St. Stephen’s product really is. “I’ve always been this way,” Allen said. “People say I’ve been too calm. I just never really showed emotion, I guess.”

Allen spent the first two months learning college basketball, and he’s really shined in league play. He’s averaging 15.3 points and 10.7 rebounds against Big 12 opponents and will likely work his way back onto some NBA mock drafts this month.

The looming question: Should Allen leave now and become a low first-round pick or stay and possibly become a lottery selection later?

2. Andrew Jones’ confidence: For whatever reason, Jones has played much better since being taken out of the starting lineup and watching the first few minutes from the bench. He’s growing into an explosive player. In the last six games, Jones is averaging 15 points and 4.7 assists. His future is extremely bright.

3. Eric Davis’ surge: Speaking of players finding their way, it’s impossible to overlook Davis’ resurgence the last few weeks. The 6-3 sophomore was in a pretty dark place, basketball-wise, in December. But he’s back to his charismatic self, having made 12 of his last 28 3-pointers.

4. Shaq Cleare’s hook shot: Last season, Cleare’s hook made you want to get the hook. But he deserves full credit for working on his game and his body during the offseason. The 6-8 senior from the Bahamas is taking full advantage of this experience.

Tip of the cap goes to assistant Darrin Horn, who works primarily with the big men, including transfer Dylan Osetkowski. Those who attended the preseason Orange-White game at Gregory Gym knows that Texas already has a 6-9 forward with some juice coming next season.

5. Recruiting: OK, so maybe Smart should’ve signed a point guard for this season. It was obvious to everyone that Isaiah Taylor was going to leave early. But getting a guard last year would’ve impacted Smart’s ability to land Virginia’s Matt Coleman, a four-star recruit this coaching staff believes is their T.J. Ford.

Coleman will be an instant starter next season at point guard. UT’s three other signees — Jase Febres, Royce Hamm Jr., Jericho Sims — also will be impactful freshmen as well.

1. Locker room chemistry: Smart has never indicated why sophomore forward Tevin Mack was suspended indefinitely, only saying it was an undisclosed violation of team rules. Those inside the program say Mack has not been officially told he cannot come back, but at this point, it doesn’t appear he will.

Smart may have been sending a coded message when he said his job is to worry about “everyone in the locker room.” The vibe has been different, and UT’s play improved in the last six games, even though the team has gone 2-4.

This team is far too young and inexperienced to be dealing with locker room disruption.

2. Mood swings: One big downside to having so many freshmen and sophomores on the floor is their inconsistency. This team gets too excited when it takes big leads and too down emotionally when the score goes the other way.

Cleare has said numerous times that he’s had to keep guys pumped up. A 10-point swing is nothing in college basketball. The last-second win over Oklahoma should be proof that anything is possible on just two possessions.

3. Hold your breath: The football-loving T-shirt fans see the basketball team’s 9-13 record and fire off emails and tweets demanding a coaching change. In reality, Texas is closer than its record would indicate.

When your team is 2-6 in three-point games — essentially one-possession games — that’s on you, not the opponent. That’s the result of one or two turnovers here, missed free throws there. Offensive fouls, boneheaded passes, empty possessions. It all adds up.

The Horns play hard every single night, and they’re competitive against everybody. Smart has to hope these are all learning lessons for the future.

4. Long-range shooting: Jones and Davis have found their stroke, but Kerwin Roach Jr. and Jacob Young are struggling from 3-point range. In conference games, Roach is 7 for 22 (.318) and Young is 5 for 26 (.192). On the season as a whole, Texas is shooting 31 percent from beyond the arc, which ranks last in the Big 12.

5. The Big 12 isn’t easy: Unfortunately, Texas cannot swap out some of the tougher opponents for weaker names over the next month, so more losses could pile up. At least UT gets No. 2 Baylor and No. 3 Kansas at home in the coming weeks. Ken Pomeroy’s analytics site still predicts UT will go 0-9 the rest of the regular season.

Keep close tabs on this team’s emotional state going down the stretch. The coaching staff hasn’t given up on this season; neither can the players. It’s imperative the Longhorns reach the finish line, wherever that is, feeling like their arrow is pointed up.