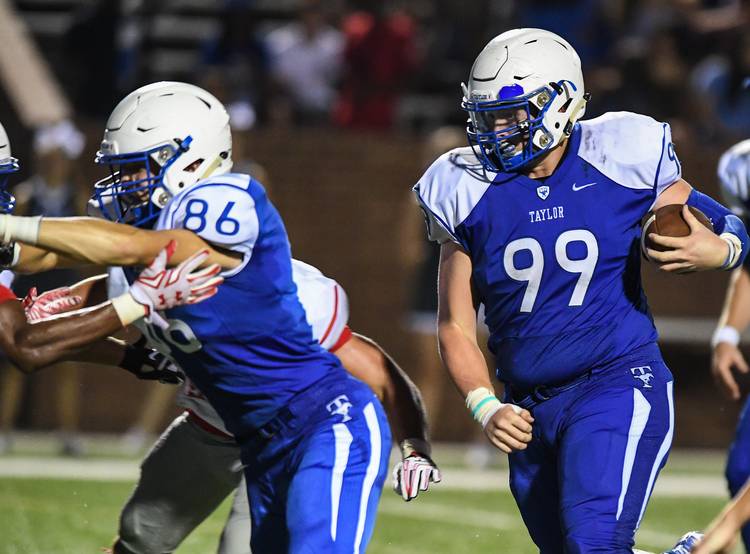 Katy Taylor defensive lineman Max Wright is the No. 3 ranked prospect in the Austin American-Statesman's initial 2018 Fabulous 55. (The Katy Times)

The days of linemen, running backs and linebackers littering these lists are no more. Wide receivers and defensive backs account for 27 of the 55 spots on the list.

RELATED: View an interactive map of home towns of the members of our initial 2018 Fab 55

The top four spots are reserved for defenders. Houston Lamar’s Anthony Cook takes the initial No. 1 spot. The 6-1, 168-pounder is a lock-down cornerback with range and physicality. He can play bump-and-run coverage or help in run support. And his closing speed, combined with his size, makes him a unique cornerback prospect.

Angleton safety BJ Foster is our No. 2, but Cook and Foster should be considered 1-A and 1-B. Foster is a unique talent with versatility. Foster could play running back or safety in college. Max Wright, a defensive end from Katy Taylor, and Cibolo Steele safety Caden Sterns are No. 3 and No. 4. Sterns, who impressed in a state championship game loss to DeSoto this December, is committed to LSU.

Manvel receiver Jalen Preston, ranked No. 5, is the state’s top offensive player. His teammate, cornerback Trent Gordon, also is on the list. They was part of a 2016 team that knocked off defending Class 5A champion Cedar Park. Preston is a tall wide receiver with elite speed and playmaking ability.

Preston was one of 12 wide receivers to make our initial list, more than any other position. Texas has offered five 2018 receivers from the state and all of them are listed. Of the 28 in-state players Texas has offered, 26 are on the Fab 55. Offensive lineman Darrell Simpson is the lone top-10 player currently without a UT offer.

Four members of the Fab 55 are already committed to Texas A&M. The Longhorns have yet to gain a commitment for the 2018 class.