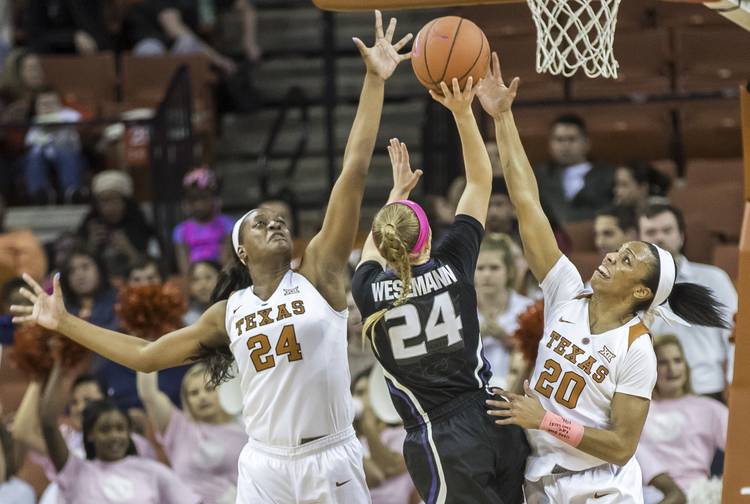 Texas' Joyner Holmes (left) and Brianna Taylor try to block a shot by Kansas State's Kindred Wesemann in the first half Saturday at the Erwin Center. The Longhorns won 63-58. RICARDO B. BRAZZIELL/AMERICAN-STATESMAN

Texas was in danger of losing its first conference game until the Longhorns put the ball in freshman Joyner Holmes’ hands.

Texas and Kansas State were locked in a 57-57 tie with 2 minutes, 30 seconds to play in their Big 12 game Saturday at the Erwin Center. But the 6-foot-3 forward scored consecutive field goals to put the Longhorns up for good and they finished with a 63-58 victory.

This was the slimmest margin of victory for the Longhorns during their 16-game winning streak.

Holmes broke the tie with a layup with 1:30 to play and gave the Longhorns a four-point lead with a short bank shot with 39 seconds to go. On both buckets, sophomore guard Lashann Higgs found Holmes open with crisp passes.

Kansas State, valiant in defeat, did not score a field goal after guard Karyla Middlebrook hit a layup with 4:55 to play.

“I’m glad my coaches and teammates trust the ball in my hands in these moments,” Holmes said. “It’s something I take pride in.”

“We were denying Atkins and McCarty, and we were trained to have an awareness of where Holmes was at,” said Mittie, adding that Higgs did a nice job of “connecting” with Holmes.

When asked if he regretted not putting more defensive pressure on Holmes, Mittie said, “I wish we had guarded her with four people.”

“It was like putting a piece of the puzzle together,” Aston said. “You had to recognize the gaps and who was open.”

Lang also reached a milestone when she scored the 1,000th point of her career on a short banker with 7 minutes left in the third quarter. She becomes the 41st player in Texas history to reach that plateau.

Kansas State gave Texas a scare by scoring the first eight points of the third quarter to take a 34-27 lead. The seven-point difference was UT’s largest deficit during the 16-game winning streak.

UT’s 75-68 victory at Iowa State had been its closest victory during the streak until Saturday.

Aston said the narrow victory will benefit the Longhorns when they have close games in the future.

“You’re always interested to see how your team responds when the game gets tough,” she said. “We did some good things down the stretch, made some good decisions.”

“We’ve definitely learned a lot from the beginning of the season,” she said. “We might have crumpled (after KSU grabbed the seven-point lead) early on.”

Texas recruiting: Longhorn targets for 2018 watch their stock rise at The Opening