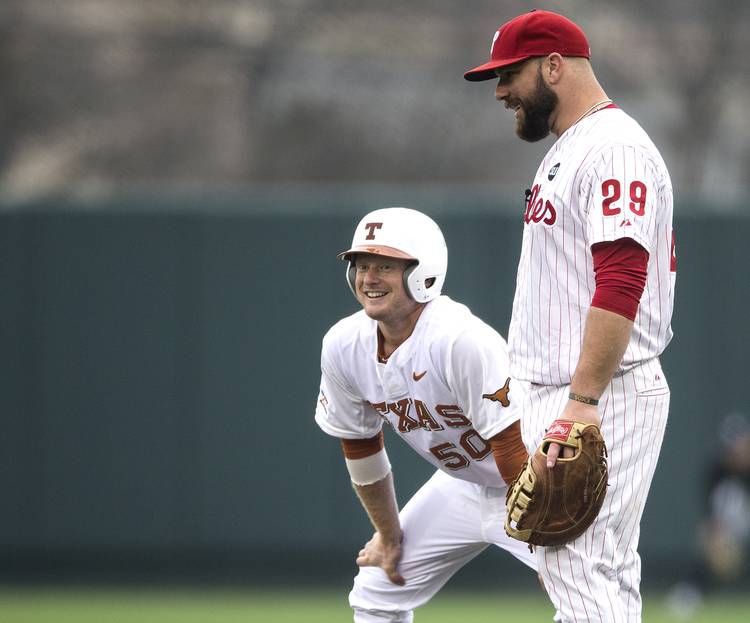 Texas alumnus Cameron Rupp of the Philadelphia Phillies jokes with current Longhorn Zane Gurwitz at first base during the Orange-White game Saturday at UFCU Disch-Falk Field. RICARDO B. BRAZZIELL/AMERICAN-STATESMAN

The next time the Texas Longhorns appear at UFCU Disch-Falk Field, the score will count.

The weekend tuneup will be the final public appearance for Texas before its season opener against Rice on Feb. 17.

“Coach (David) Pierce told us this was kind of like the dress rehearsal,” Cooper said. “It’s fun to come out here and see all the old guys and stuff. For us, it’s just getting work in. The main thing for us was taking it seriously and getting something out of it.”

Using seven extra-base hits over the first three innings, the White team built a 7-1 lead on a chilly afternoon. Texas catcher Michael Cantu contributed two of his lineup’s six doubles in that span, and Bret Boswell hit a solo home run. Boswell’s blast cleared a right field fence that was brought in during offseason renovations at the stadium.

“It’s the hitters’ job to thank me whenever they hit a home run and come into the dugout,” joked Pierce, who designed the new dimensions at Disch-Falk after he took over the baseball program in June.

The Texas Exes, each of whom lined up in the Orange dugout, weren’t as successful on offense.

The projected ace in Texas’ rotation, Cooper opened Saturday’s scrimmage with strikeouts of veteran major league outfielder Drew Stubbs and Ben Johnson, who spent last year with Kansas City’s Single-A affiliate. Cooper worked three innings, and four of his 37 pitchers finished off strikeouts. Stubbs’ solo homer in the third inning was the only hit allowed by Cooper, a right-hander from Jarrell.

“I felt good; my arm felt good,” Cooper said. “I thought I was throwing all my pitches pretty well. I don’t really want to put a grade on it, but I thought I felt good.”

The alumni were pulled after the third inning, and the rest of the eight-inning affair was played out as an intrasquad scrimmage. Eight ex-Longhorns took a swing in the game. Former Texas pitchers Taylor Jungmann, John Curtiss and Ty Culbreth were in attendance but inactive.

“It just shows you how fast time flies. This is my 11th alumni game to play in,” Stubbs said. “It is a fresh feeling to come back every year. (It’s fun) to see some new faces that have made the transition from the orange and white over into their professional uniform and to get to share some time with guys you don’t really get to see during the course of the offseason.”