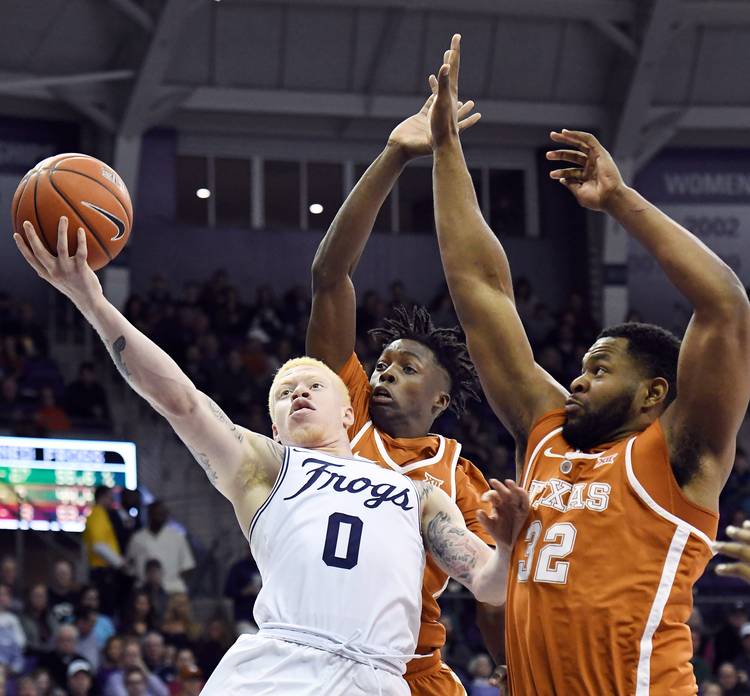 TCU's Jaylen Fisher (0) lays up a shot against Texas' Andrew Jones and Shaquille Cleare (32) in the second half on Saturday, Feb. 4, 2017, at Schollmaier Arena, in Fort Worth, Texas. TCU won 78-63. (Bob Haynes/Fort Worth Star-Telegram/TNS)

FORT WORTH — The past came roaring back to life on throwback day inside a pulsating Schollmaier Arena.

The Horned Frogs wore replica jerseys on Saturday with script lettering from the ’50s and ’60s. There was plenty of music spanning the next two decades, and Kurt Thomas, the star of TCU teams from the early ’90s, saw his jersey retired.

TCU fans were happy to get on up on the floor and boogie, oogie, oogie until they just couldn’t boogie no more in a 78-63 win over Texas.

“I’m really excited. It’s special to us,” TCU coach Jamie Dixon said. “Texas is Texas. It means something, and we understand that. I thought it was a great day for TCU.”

Whoa, Dixon’s rebuilding project is halfway there. It’s the first time the Frogs have swept the regular-season series against the Longhorns since the ’80s, a time when TCU routinely kicked UT’s tail in basketball. In fact, the second of those two wins came on Feb. 18, 1987, when Bon Jovi’s “Livin’ on a Prayer” stood atop the Billboard chart.

Those days — TCU’s domination, not Bon Jovi’s — appear to have returned, and the Frogs are going to live it up, live it up, all over the town. The millennials over in the TCU student section were chanting, “Just like football!” Ouch.

The Longhorns have lost three of the last four basketball games in this series. The losing streak in football stands at three. None of those losses were on Mack Brown, who was sitting behind the UT bench and, obviously, did not feel like dancing.

This was the first time TCU beat Texas in football and swept the men’s basketball series in the same academic year since 1958-59.

The Longhorns (9-14, 3-7 Big 12) once again had solid efforts from the usual suspects. Jarrett Allen had a game-high 22 points on 9 of 14 shooting. Andrew Jones turned in 14 points and seven assists, and Cleare had 12 points inside. But that was about it.

The Frogs (16-7, 5-5) got 18 points from Vladimir Brodziansky, 17 from Alex Robinson and at least five or more from six other players. TCU shot 51.7 percent, making this the first time UT has allowed any opponent this season to hit more than half its shots.

“You’ve got be a little concerned, but you can’t be too concerned,” Cleare said. “We know we’ve got some work to do.”

As in previous league games, Texas was competitive for long stretches and trailed by one with 14 minutes, 43 seconds remaining. Then the Frogs went on a 7-0 run that included Brandon Parrish’s 3-pointer over Jacob Young and Robinson’s fast-break layup.

Suddenly, TCU was up 57-49. “That was the difference, that run there,” UT coach Shaka Smart said. “During that run, we had some possessions we’d love to have back.”

Asked about the team’s confidence level, Smart said, “Confidence as a team comes from having a level of belief in each other and having a level of understanding that this is what we have to do to win. We’re obviously a long way away from that.”

Both Cleare and fellow senior Kendal Yancy said they feel its important to keep the younger players’ spirits up despite some difficult losses.

“I feel like they feel a little bit defeated, honestly, yeah,” Yancy said. “I think that’s just because they’re young and the way the season’s been going here lately.”

Next comes Tuesday’s home date with Iowa State, a team that bumped off No. 3 Kansas on Saturday. Needless to say, it doesn’t get any easier.

“The guys, they just don’t know,” Yancy added. “Shaq and I have been there. Shaq’s been here for 10 years in college, and I’ve been here for four. It’s just our experience. We’ve got to show these guys what it’s like.”