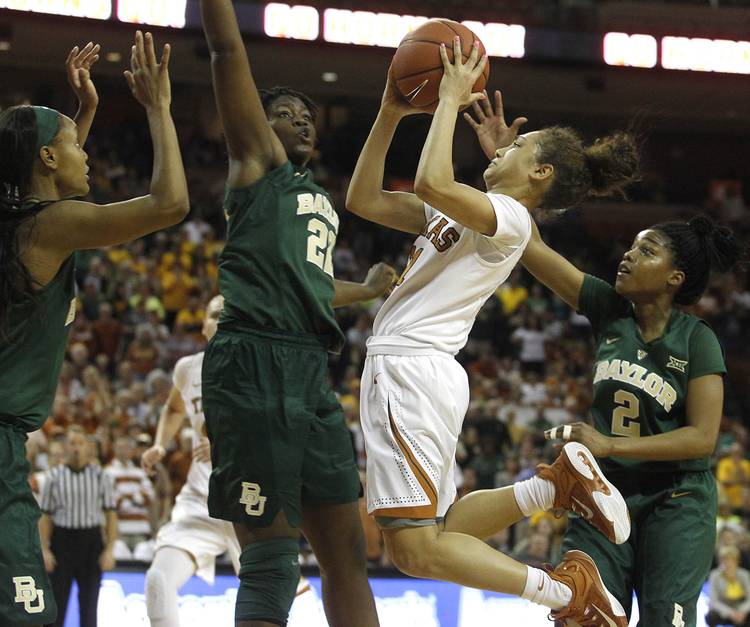 Baylor's Nina Davis (13), Sune Agbuke (22) and Niya Johnson (2) defend against Texas' Brooke McCarty as she drives to the basket in the final moments of a game at the Erwin Center in 2015 (STEPHEN SPILLMAN/FOR AMERICAN-STATESMAN)

For the past few weeks, Karen Aston has deflected conversation about the upcoming Texas-Baylor game.

The players need to “stay in the moment” and not look ahead, she has said countless times. Why worry about the future when you’re staring at games against TCU, Oklahoma and Kansas State beforehand?

The much-anticipated game between No. 2 Baylor and No. 12 Texas has arrived. Both sport 12-0 records in the Big 12. Anyone who watches NCAA women’s basketball will keep an eye on this game Monday night at the Ferrell Center in Waco.

But no matter what happens, both teams will have bigger games to play before the season is over, Aston said.

“I don’t anticipate our team looking at this game any differently than we have for all of our games,” Aston said after Texas rallied for a 63-58 victory over Kansas State on Saturday at the Erwin Center.

“We’ve talked from the beginning about putting ourselves in a position to have an opportunity to win a conference championship,” she continued. “If you don’t prepare for every single game, you’re not going to get that chance. … This is not a league where you can say you don’t have to get ready today.”

True, but the Big 12 has turned into the Big 2 when it comes to women’s basketball.

Texas seniors Kelsey Lang and Brianna Taylor are searching for their first career victory over the Lady Bears in their last visit to Waco.

“Coach tells Bre and I before every away game in the Big 12 it’ll be our last time wherever we are,” Lang said. “We take that into consideration. It is our last time, and we want to go out strong.”

Lang, who has blossomed in her final year, reached a personal milestone on Saturday when she became the 41st Longhorn to score 1,000 points.

“I’m really proud of Kelsey’s career and her journey at the University of Texas,” Aston said. “First and foremost, she’s a model student. But she’s grown into a solid basketball player, and it seems we’re so much calmer when she’s on the floor. A lot of it is her experience and understanding of the game.”

Although freshman Joyner Holmes will be playing Baylor for the first time, she is already family with some of the team’s top players. In high school or club competition, she has played against 6-foot-4 post Beatrice Mompremier, 6-7 post Kalani Brown, 6-4 forward Lauren Cox and 5-9 guard Calveion “Juicy” Landrum.

Baylor, which defeated Texas Tech 79-61 Saturday in Lubbock, has won its first 12 games of a conference season four times. The Lady Bears have won 29 straight Big 12 regular-season games since they lost to Oklahoma State in last season’s conference opener.

Texas hopes to snap a 14-game losing streak to the Lady Bears.

Texas recruiting: Longhorn targets for 2018 watch their stock rise at The Opening