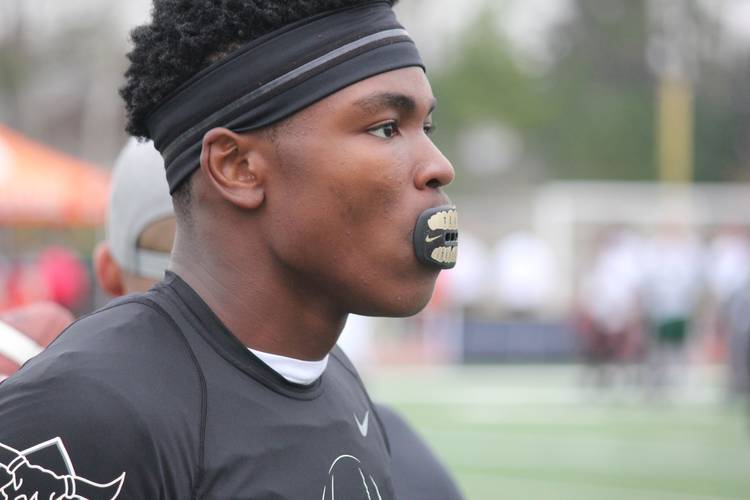 HOUSTON — More than 300 of the state’s top players, along with a few from outside of Texas, converged at The Kinkaid School Saturday in Houston for the first The Opening regional of 2017. The event featured 16 prospects with Texas offers and more than 20 from the initial Fab 55 for the 2018 class.

The morning is a combine. All players are measured and tested in events including the 40-yard dash, vertical jump and the shuttle. These statistics will be added up and combined into a prospect’s SPARQ score. Per a press release, the official SPARQ scores from the Houston regional were not available.

The afternoon portion of the event featured position drills and 1-on-1 competitions. The event is built to test athleticism and competitiveness. The alpha males tend to rise toward the top in camp settings. Camps shouldn’t be a complete measure of a player. There are no pads. No referees. It is a tool, however, and numerous Longhorn targets watched their stock rise.

It is a good year to need a cornerback or a safety. The Fab 55 consists of 15 defensive backs and a handful of those prospects shined Saturday. And no one proved more than cornerback Anthony Cook. The No. 1 player in the state rose to the occasion in 1-on-1 drills. He holds a Texas offer and says the Longhorns are among the schools he’ll visit this spring.

“I’m here to prove I’m the best player in the state,” the Houston Lamar product said before the event. “We have fun out here between the reps and all that, but it is competition once we’re on that field. The best player wins.”

Lamar won’t be an easy team to pass against in 2018. D’Shawn Jamison, the No. 36 player in the Fab 55, more than held his own and made a case that he’s the best cornerback in the state. Denver Broncos cornerback Chris Harris Jr. was in attendance, and he raved about Jamison throughout the event. Jamison also holds a Texas offer.

Houston Heights cornerback Jalen Green was also impressive. He plans on attending Texas’ first junior day on Feb. 25 along with many offered targets in attendance.

Leon O’Neal from Cypress Springs was the best safety at the event. Ranked No. 30 in the Fab 55 and holding a Texas offer, the four-star bullied his way to success throughout the day. His presence was obvious, and he showed solid coverage skills even though he couldn’t show off his physicality without pads. His stock rose as much as any player in attendance.

Depth is obvious at wide receiver

No other position on the Fab 55 is as well-represented as wide receiver with 12 prospects littered throughout. The top three wide receiver prospects in the state all hold Texas offers and each took part in Saturday’s event.

Yoakum’s Joshua Moore, ranked No. 7 in the Fab 55, says Texas is among his favorites and spoke fondly of Texas. His brother, Jordan, was also at the event and is committed to Texas A&M. Moore, a two-way star at Yoakum High School, says he’ll play outside wide receiver in college and that his brother’s destination won’t affect his decision.

“Of course Jordan is in my ear,” Josh said. “I’ll do what is best for me. I need to pick the best fit and go where my heart wants to be for the next part of my journey. Texas is without a doubt one of my top schools. I love that coaching staff like family.”

Manvel’s Jalen Preston lived up to his No. 5 ranking in the Fab 55. He’s a big-bodied wide receiver who simply overpowers most cornerbacks. He also showed the speed to get vertical on the likes of Green and Jamison.

Alief Taylor product Brennan Eagles, ranked No. 13 in the Fab 55, was the most impressive player in attendance. He ran one of the fastest times of the day, measured in at nearly 6-foot-4 and weighs more than 200 pounds. Eagles received a Texas offer in early January and plans to visit Austin.

Dekaney’s Malcolm Epps announced his de-commitment from Alabama and showed why he’s the top-ranked tight end in the state. At 6-foot-6, Epps’ frame makes him a mismatch issue.

Frustrating day for the big guys

Spring and summer camps aren’t built for linemen. Camps like The Opening highlight skill players. That didn’t keep a few blue-chip prospects from testing and competing Saturday. The group was led by Katy Taylor defensive end Max Wright. He ranks No. 3 in the Fab 55.

“These camps are for the small guys, but we still get better and compete,” he said. “It is tough to be physical without pads. We try and work on pass rushing and the offensive linemen focus on pass blocking. It’s a fun way to compete.”

Westfield’s Keondre Coburn impressed. The defensive tackle holds a Texas offer and is familiar with the Houston staff through a connection with assistant coach Corby Meekins, who used to be the head coach at Westfield. Offensive lineman Barton Clement, the No. 9 ranked player in the Fab 55, is a better run blocker than a pass blocker at this stage in his career and he struggled at times.

It’s a subpar year for quarterback talent in the state of Texas. The Longhorns have three 2018 offers out at the position and each play out-of-state. The cold, windy conditions didn’t help with consistency. Waco Midway prospect Tanner Mordecai had the best day. The three-star is yet to receive a Texas offer, but the staff did offer him while at Houston. He’s ranked No. 47 in the Fab 55.