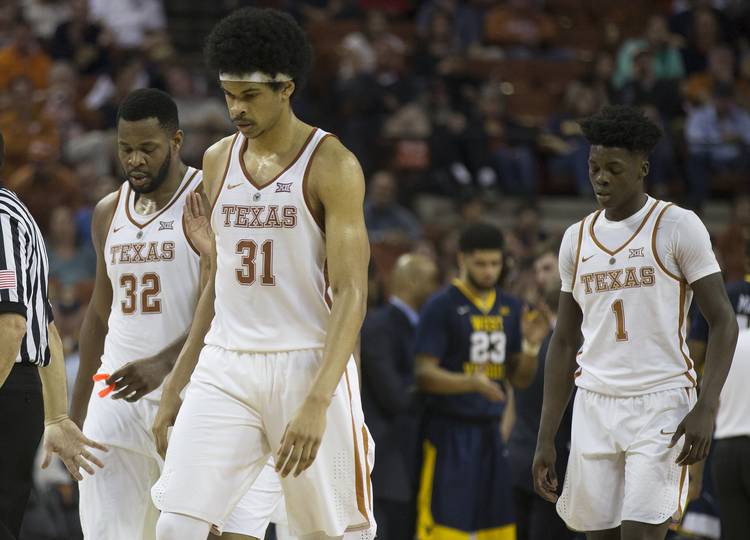 Shaquille Cleare, Jarrett Allen and Andrew Jones must lead the charge for the Longhorns in the final month of the regular season. RICARDO B. BRAZZIELL/AMERICAN-STATESMAN

At this point, the die is cast on the Texas men’s team. They are what they are, a 9-14 squad that’s likely going to finish near the bottom of the Big 12.

The Longhorns always play long stretches of competitive, winning basketball. Unfortunately, it lasts 35 or 36 minutes of a 40-minute affair. That turbulent, missing gap is likely driving the coaching staff crazy.

“Teams aren’t necessarily the exact same team from day-to-day,” UT coach Shaka Smart said. “The best ones find a way to be as consistent as they need to be.”

Take Saturday’s 78-63 loss to TCU, for example. It was a one-point game with 14:43 remaining. Then the Frogs went on a 7-0 run and suddenly UT was in a nine-point hole minutes later. A winnable game slipped away.

It was puzzling enough that UT senior Shaq Cleare said, “I think we got bummed out just a little bit when their guys were making shots.”

Texas pushed Iowa State for the majority of the night in Hilton Coliseum on Jan. 7. But the Horns had a turnover and a missed 3-pointer on back-to-back possessions, and the Cyclones went the other way and scored. A one-possession game became a eight-point deficit for UT with 1:33 left.

The Longhorns and Cyclones meet again at 8 p.m. Tuesday, but the two teams are in vastly different spots mentally.

Texas is coming off one of its worst defensive performances of the season against TCU. Iowa State (14-8, 6-4 Big 12) will practically float south to Austin after knocking off No. 3 Kansas on Saturday in Allen Fieldhouse.

“God is good, man,” Iowa State coach Steve Prohm said afterward. His voice even sounded a little shaky at times. “This is a special win, a special day for these guys.”

Prohm probably fielded multiple congratulatory calls and texts. Smart said Monday coaches and friends have reached out to him to offer words of encouragement.

“You get certain opportunities in life and in basketball, and you either take advantage of them or you don’t,” Smart said. “It’s really easy to look back and say I should have done this or that. Probably our biggest challenge when you’re dealing with younger guys is expediting that thought process of, forgive the pun, let me grab the bull by the horns.”

Smart sounds like a coach who knows the current players will wake up one day in April or May and realize their season could have been different. Texas has not gone into any game overmatched. The Horns simply commit too many errors, like 13.9 turnovers per game, in what is easily the toughest basketball conference in Division I.

Smart has spent extra time with Kerwin Roach Jr. to help work on what the coach calls “clarity of purpose.”

“Why do you play? What do you want out of this?,” Smart said he asks Roach. “When he has a clear mind and is not clouded by anything else, he is really good.”

If Smart can solve this team’s mental riddles, there might be a way to salvage the final month. The closer Texas can get to playing well for all 40 minutes, the better.