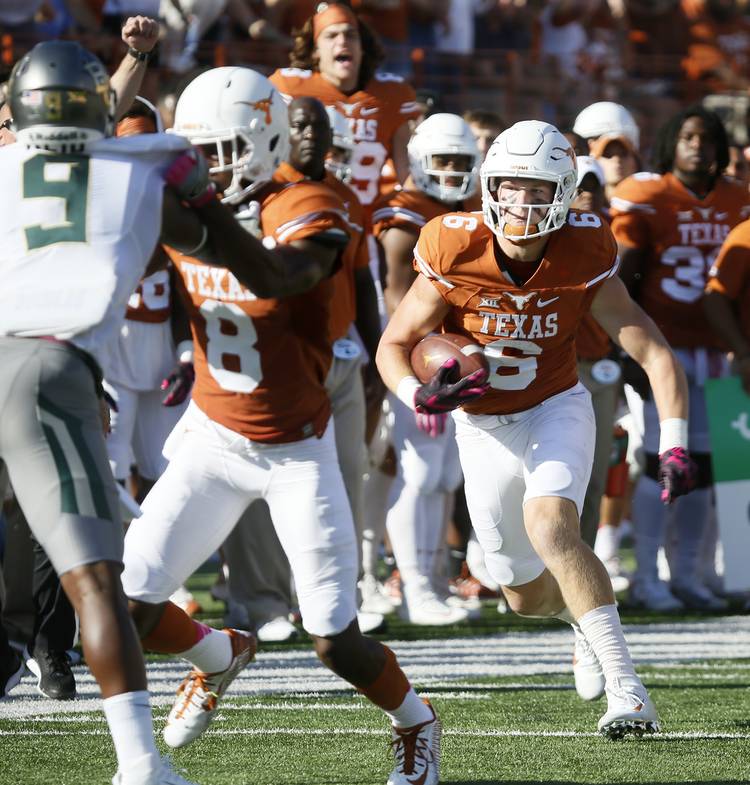 If Texas was to boast of a position of strength this coming football season, it would be hard to argue against the wide receivers. The Longhorns, after all, recorded 241 receptions in 2016 and 202 of those were logged by players who were expected to be back this fall.

You can now subtract 33 from that total.

Texas announced on Monday that receiver Jake Oliver has decided to forego his final year of eligibility as he pursues a job opportunity. ESPN reported that Oliver, who is majoring in communications, is set to graduate in May.

Oliver is coming off a junior year in which he turned 33 receptions into 358 yards.

“Even though I’m going to miss football, I’m really excited to take on a new challenge,” Oliver said in a statement. “I talked with Coach (Tom) Herman and appreciate his support and understanding. I wish the best for the new staff and all of my teammates. I know firsthand how good this team can be, and I’m looking forward to cheering them on to a lot of wins. I’ll always bleed burnt orange.”

Off-the-field, Oliver’s departure clears up the use of a scholarship. College teams are allowed to have 85 scholarship players, so some additional attrition will be needed to make the math work. Oliver excluded, Texas was set to return 36 scholarship players on offense and another 31 on defense. Punter Michael Dickson is also on scholarship, and the Longhorns added 18 players on national signing day.

How much will Oliver’s exit hurt Texas’ on-field product, though? Only time will tell.

Then the state’s all-time leader in career catches, Oliver was a four-star prospect and a U.S. Army All-American when he signed with Texas in 2013. Oliver, though, redshirted in 2013 and did not play as a freshman. During his sophomore year, he worked on special teams.

Before his junior year, he dropped more than 20 pounds and was moved to an inside receiving position. He was the only receiver with triple-digit receptions during Texas’ fall camp, and that success carried into the season. With 34, Armanti Foreman was the only Longhorn with more catches that Oliver in 2016.

Not considered the quickest in the receiving corps, Oliver was among the most reliable. Last season he was targeted 44 times by freshman quarterback Shane Buechele. He caught a pass in all 12 games.

“We’ve always known that Jake was special,” quarterback Tyrone Swoopes said in October. “We’re glad that he’s finally getting a chance to show it.”

Oliver was one of seven Longhorns who caught 20 passes, but Jacorey Warrick was the only senior of the bunch. Sophomore John Burt, who recently set aside his track career in an effort to focus on football, is coming off an 18-reception year. Lorenzo Joe (eight catches in seven games in 2016) is also still on scholarship.

Down goes Baylor! Texas women put the Big 12 on notice with upset in Waco