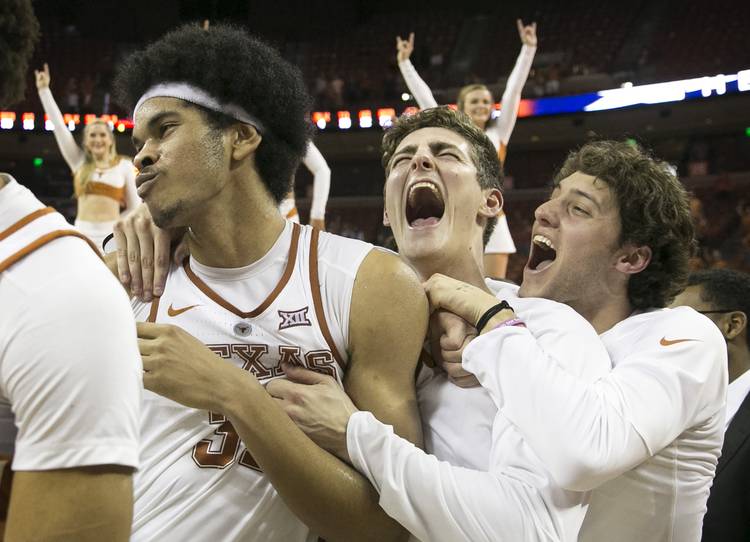 Even in this frustrating season, the Longhorns can still cut loose and let ’er rip.

Jarrett Allen got open in the corner and heard assistant coach Darrin Horn yelling from the bench to shoot. “I’ve got to shoot it,” Allen said. Eh, maybe not.

Then on an inbound play, Iowa State basically left the 6-foot-11 freshman in the corner all by his lonesome. “I’ve been working on that shot for a while now, so I might as well shoot it if they’re going to leave me that wide open.”

No, that didn’t work out too well, either. “Well, it wasn’t the play,” Texas coach Shaka Smart said. “But he made some pretty important ones at the end.”

Allen did happen to drill two free throws with 7.2 seconds that made the difference in a much-needed 67-65 win over Iowa State. The Longhorns gave away a 17-point lead but ultimately held on Tuesday and improved to 10-4 at the Erwin Center.

If the Horns (10-14, 4-7 Big 12) could play every game at home, this season would probably be magical. But they’re 0-7 on the road and headed out for two games north of the Red River — Saturday at Oklahoma State and next Tuesday at Oklahoma.

Future opponents are probably going to be looking forward to Kansas or Baylor and probably looking past Texas. Hey, that’s just fine with senior Shaq Cleare.

“That’s what we like. We like being the underdogs,” said Cleare, who had 12 points and a critical bucket with 29.3 seconds left. “Iowa State came in here and slept on us tonight. … If anyone wants to take us for granted, that’s on them.”

The Cyclones (14-9, 6-5) might’ve been a little hung over from last Saturday’s road win at No. 3 Kansas. It snapped the Jayhawks’ 51-game winning streak in Lawrence. Talk about a drowsy start to this one. The Longhorns raced out to a 17-3 lead in the first eight minutes and got up 22-5 with 8:42 left before the break.

“Tonight, we were horrendous coming out of the gate,” Iowa State’s Naz Mitrou-Long said. “There’s no one else to blame but the players.”

Aside from the two missed treys, Allen had 17 points and nine rebounds. Fellow freshman Andrew Jones made only two of 11 shots but got within shouting distance of a triple-double with 10 points, nine rebounds and seven assists.

One of the big playmakers was senior Kendal Yancy, who had nine points and was an energetic spark plug off the bench. His running, two-handed flush with 1:56 left gave UT a three-point lead. But Deonte Burton negated that with a sizzling 3-pointer with 47 ticks left.

Yancy knew the defensive effort in last Saturday’s 15-point loss to TCU wasn’t acceptable. Not even close. The Horns picked it up against the Cyclones. Monte Morris was held to just 10 points on 3 of 11 shooting. Matt Thomas hit five 3-pointers, but Iowa State was 9 for 25 overall from downtown.

Thomas’ off-balance 3-point shot as time expired didn’t have a terrific chance. The Cyclones wound up with their lowest scoring total since a Jan. 4 loss to then-No. 2 Baylor.

“We knew that wasn’t us against TCU,” Yancy said. “We practiced much harder than what we (showed) against TCU. So we just made a decision that we were going to go out there and play Texas basketball.”

Burton, a 6-foot-5 senior, is a difficult matchup for the Horns. Should you put a guard on him or use Allen or Cleare? Burton had 27 points when the two teams met in Ames on Jan. 7. This time around, he got 13 on 5 of 12 shooting.

“Iowa State’s hard to guard as anyone in our league,” Smart said. “Holding them to 65, that’s a big victory.”

Big, and momentous, too. This young team needs all the positive mojo it can get. So even though it’s one win, Texas will take it.

“We kept fighting and executing what coach wanted us to do,” Cleare said. “That’s why we were able to come out with the win.”