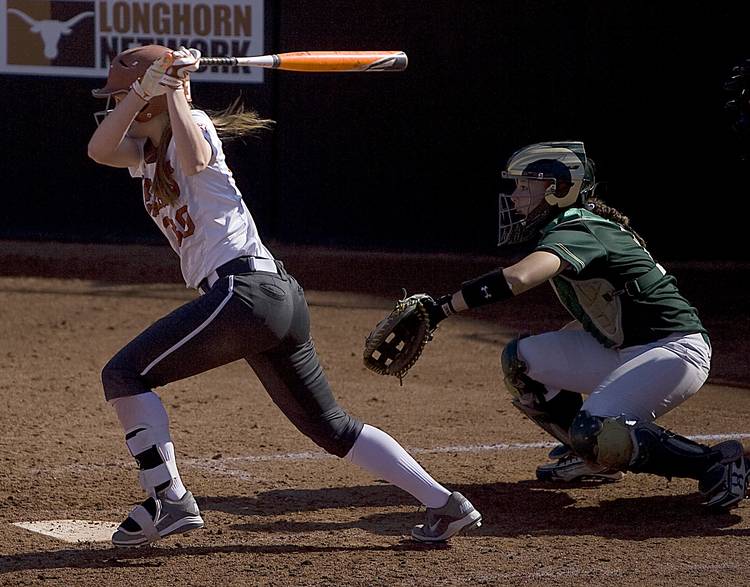 Sophomore Kelli Hanzel gets a hit against Colorado State at McCombs Field during the Texas Classic on Feb. 14, 2015. MICHAEL ADAMS PHOTO

The softball team at Texas doesn’t have to look that far for an answer. The Longhorns share a conference with Oklahoma, which beat Auburn for the NCAA Women’s College World Series title in 2016.

So in addition to being a rival, Oklahoma will be used as a measuring stick this season, which begins Friday for Texas in the season-opening Texas Classic; the Longhorns open on Friday against Colorado State and 16th-ranked Minnesota.

On Wednesday, players expressed confidence that they can contend alongside the Sooners. Texas was picked to finish second behind OU in the Big 12’s preseason coaches poll.

“I think we do look like a championship team,” senior Tiarra Davis said. “Since the fall, every day we’ve continued to get better and better. I don’t see a peak in our team anytime soon. As long as we keep getting better, I think we will be at the World Series with OU.”

Speaking of Oklahoma, Texas has turned to an ex-Sooner for help on offense. Tripp MacKay, who was an assistant at Oklahoma from 2007-15, was hired in July to be UT’s hitting coach. He replaced Corrie Hill, who is now an assistant at Central Florida.

Senior infielder Kelli Hanzel said MacKay has changed the offensive mentality at Texas and helped improve the Longhorns’ swings. With players like Celina Felix and Reagan Hathaway still in the lineup, Hanzel added that Texas will be aiming to score more than five runs a game. The Longhorns averaged 5.3 in 2016.

“We’ve done a really good job of trying to figure out what he’s teaching us and everything like that,” Hanzel said. “I think our line-up looks really solid as well.”

Youth movement: At the baseball team’s alumni game last Saturday, youth prevailed on the left side of the infield.

Freshmen David Hamilton and Ryan Reynolds started at shortstop and third base, respectively, for the victorious White team in the annual scrimmage between current and former Longhorns. Batting second in the lineup, Hamilton contributed two doubles, two RBIs and a run. Reynolds was 3 of 4 with a walk out of the cleanup spot.

Hamilton, who hails from San Marcos, chose to attend Texas after the Los Angeles Angels drafted him in the 28th round of the 2016 MLB amateur draft. Reynolds, whose father also played baseball at Texas, was signed out of Louisiana’s Oauchita Christian.

A 6-2 outside hitter, Sun registered 630 kills and a .431 hitting percentage during her senior year at Santa Fe Christian in Solana Beach, Calif. She also had 288 digs, 60 blocks and 45 aces.

Sun’s achievement will be added to an already-full bio. She was recently named the Gatorade player of the year, and both USA Today and MaxPreps honored her with similar awards. In December, she was named her team’s MVP at the Under Armour All-America match. PrepVolleyball.com also ranked Sun as the top recruit in the Class of 2017.