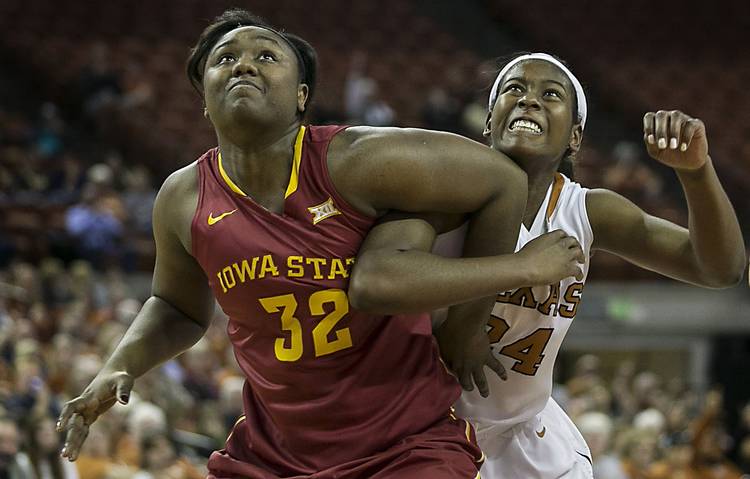 Texas Ariel Atkins (24) and Iowa State Fallon Ellis (32) lock arms as the go for position for a rebound during the first half Big 12 basketball game held at the University of Texas in Austin, Texas, on Sunday, Jan. 25, 2015. (RODOLFO GONZALEZ / AMERICAN-STATESMAN)

Team manager Helen Tau retrieved balls and fed passes to the junior shooting guard. This was not the first time Atkins has hit a string of shots without a miss, Texas basketball coaches have said.

Atkins has played a critical role during the Longhorns’ 17-game winning streak. In UT’s most important wins of the season — victories over No. 20 Oklahoma and No. 2 Baylor — no one performed any better than Atkins, a 2014 McDonald’s All-American from Duncanville.

After scoring 19 points on 9-for-13 shooting from the field in an 86-68 victory over the Sooners, OU coach Sherri Coale said, “When I get my Big 12 ballot at the end of the year, I always put her immediately because she’s just such a complete basketball player.”

During Monday’s 85-78 victory over Baylor, Atkins helped lead the offense with 20 points on 8-for-12 shooting from the field.

Atkins’ role changed before the season. For starters, she had to pick up some of the offensive load after four seniors graduated last May. Furthermore, Karen Aston told Atkins and fellow junior guard Brooke McCarty they needed to become outspoken team leaders, a tall order for players who generally don’t seek attention.

Atkins showed leadership after the Baylor game, telling her younger teammates to treat the victory with a business-as-usual approach.

“We didn’t want to get too crazy and jump on our coach,” Atkins said. “She’s kind of small and we don’t want her to get hurt.”

“If you ask the players who the team leaders are, who do they go to for words of wisdom, most people will say Ariel/Brooke,” he said. “I believe Ariel has reached a point in her career where she feels her voice can be heard.”

Atkins said the offense has become “more fluid” during the winning streak. The players are no longer “overpassing the ball like we used to.”

With just five conference games remaining, the first-place Longhorns has a chance to unseat Baylor as champion of the Big 12.

“Baylor is still the reigning queen of the conference,” Washington said. “They’ve had a stranglehold for five or six years. It’s a huge thing for any team that goes into the Ferrell Center and comes out with a win.”

Texas, Oklahoma State are both struggling in Big 12 nailbiters