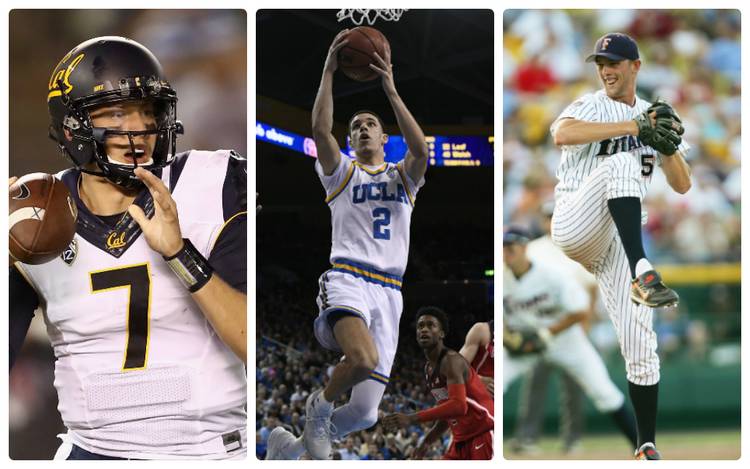 Athletes from state-supported athletic teams from California, like Cal, UCLA and Cal State Fullerton (left to right), may not get back to Texas much if a controversial bathroom bill passes through the Texas legislature. (Photos from Associated Press and Getty Images)

Athletes from California public schools may not be traveling to Austin much longer if Texas lawmakers approve a bill to restrict transgender-friendly bathrooms or pass other proposals that would allow individuals, businesses or government employees to refuse to serve same-sex couples over religious objections.

A new California law went into effect on Jan. 1 prohibiting employees or participants in state agencies from traveling to other states with laws that “has the effect of voiding or repealing” protections based on sexual orientation, gender identity or gender expression.

The California attorney general has already banned state-supported travel to Kansas, North Carolina, Mississippi and Tennessee, and officials are willing to add more.

Texas Republican leaders have proposed Senate Bill 6, which would require public schools and universities to designate bathrooms for use by people based on their biological sex.

Could this force the cancellation of the Longhorn football team’s second home game versus San Jose State in 2017?

A spokeswoman for the California attorney general’s office declined to comment on the proposed legislation in Texas. However, any state that created a new law violating California’s Assembly Bill 1887 “would include that state on the travel ban list.”

The California ban has a carve-out allowing for schools to honor contracts that were signed before New Year’s Day, so Texas’ matchup versus the Spartans will go on, but future home contests versus public university teams from the Golden State may be shelved.

Asked about his school’s level of concern, San Jose State spokesman Lawrence Fan said, “I would put it more in the monitoring stage. While we’re talking about football, San Jose State has many sports. You can make your assumptions from there.”

Football contracts are usually signed years in advance, although the San Jose State-Texas game was added last year. Central Florida asked UT officials to push back a 2017 matchup, and San Jose State was added as a late replacement. The contract was signed in mid-2016, UT athletic director Mike Perrin said.

Texas is scheduled to host University of Southern California at Royal-Memorial Stadium in 2018. USC is a private school and would not be prevented from traveling to Texas under the California law.

However, California’s travel ban could be problematic for smaller sports, which usually build out schedules on a year-to-year basis. Schools normally request a two-game, home-and-home series in most team sports.

West Coast teams can usually be found scattered all over the UT athletic schedule.

The Cal and UC Santa Barbara women’s soccer teams both traveled to Austin during the fall to play Texas. The UCLA baseball team is scheduled for a three-game series against Texas at UFCU Disch-Falk Field in March. The Longhorns played the Bruins in Los Angeles last season.

Kansas officials had to scrap plans for a men’s basketball series with Cal because of the new law, the Lawrence Journal-World reported. “Cal said they couldn’t do it,” Kansas athletic spokesman Jim Marchiony said.

“Like athletic directors and others that are involved across the county, I think we have to be very cognizant of what may happen,” Perrin said. “The experience in North Carolina and other states, there’s a measurable impact out there. It’s of concern to me.”

The NCAA pulled seven championship events from North Carolina after that state passed a similar bathroom bill. The Atlantic Coast Conference announced it would relocate all neutral-site championships from the Tar Heel state. The NBA moved the 2017 All-Star game to New Orleans from Charlotte.

Forbes estimated that North Carolina will miss out on $100 million in tourism spending with those events going elsewhere.

“As states look at passing those laws, they’ve got to look at the impact not only on sports but on entertainment, business recruiting, the whole mobility issue on hiring separate and apart from event issues,” Perrin said. “It’s a big issue.”

Texas, Oklahoma State are both struggling in Big 12 nailbiters