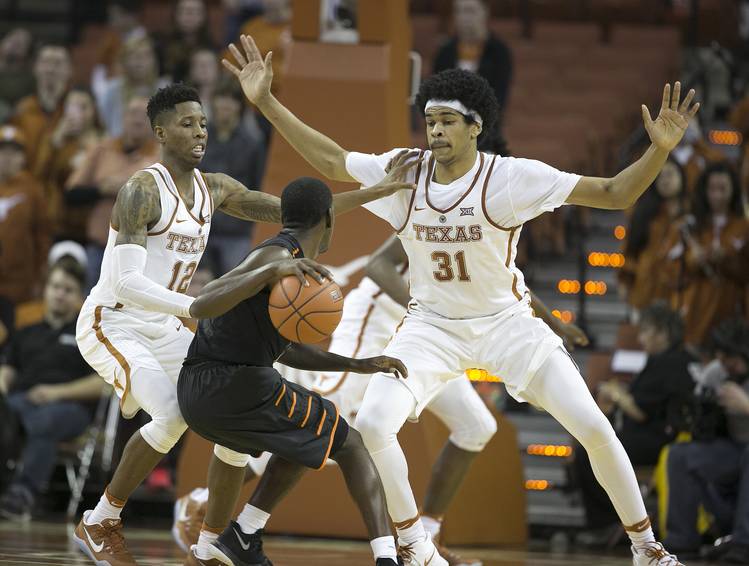 Think Texas is the only team struggling to win close games?

Oklahoma State is 1-3 in Big 12 games that have been decided by four points or less. That includes a 72-69 loss to Baylor on Wednesday in Stillwater.

“Every game in this league is just like that. It’s just so close,” OSU coach Brad Underwood said. “Every call, every missed layup, every missed rebound, everything becomes so magnified over a 40-minute game because of the closeness of these games and how good everybody is.”

When the Longhorns and Cowboys meet again Saturday at Gallagher-Iba Arena, both teams will feel like they’re due.

One of those nail-biters was a three-point win over the Cowboys on Jan. 4 at the Erwin Center. In a bizarre start, OSU was called for seven fouls in the first four minutes. That changed the complexion of the entire night; the Longhorns shot a season-high 33 free throws.

“They beat us the first time, so we know that we have to be ready to play,” OSU guard Phil Forte III said.

The margin for error is ridiculously thin, which is why UT coach Shaka Smart has harped on minimizing empty possessions. Turnovers in transition, bad passes, offensive fouls, you name it all leads to fewer shot attempts. The Horns average 16.8 seconds per possession, a middling number by Division I standards, and 56 shots per game. Compare that last statistic to run-and-gun West Virginia (64 shots) and Iowa State (63) and Kansas (62).

Texas is the worst shooting 3-point team in the league. UT hits only 30 percent of its shots from beyond the arc. TCU, the ninth-place team, hits 34 percent.

So if the Horns can’t find any long-range consistency, and they’re taking fewer two-point shots than most other teams, it’s bound to result in fewer points, right? Smart would give anything for another eight to 10 points each night.

With no prompting, UT senior Kendal Yancy said on Tuesday he believes that’s his role at the moment. “Just getting extra rebounds, getting extra possessions, extra attempts, that’s what we really need,” Yancy said. “I’m that guy to do that, and I accept that.”

As has been discussed all season, UT’s offensive struggles could be helped with a true point guard, an issue being addressed through recruiting.

Currently, there are times when Kerwin Roach Jr., Eric Davis Jr. or Andrew Jones dribble for long stretches of the shot clock looking for opportunities. When the shot clock dips under seven seconds, that’s when the chaos begins.

“The common thread is we try to do one thing and the defense takes it away,” Smart said. “We practice execution quite a bit, but sometimes when guys get in that moment, we don’t always exactly do what we need to do.

Aesthetics aside, the Horns did get a mental boost from the win over the Cyclones, a group that had just beaten the third-ranked Jayhawks. They’re carrying some confidence into two road games at Oklahoma State and Oklahoma. UT is 0-7 in true road games this season.

“These guys, they’re doing exactly what they need to do,” senior Shaq Cleare said. “They’re growing up real fast, maturing real fast and they’re kind of taking things into their own hands right now.”