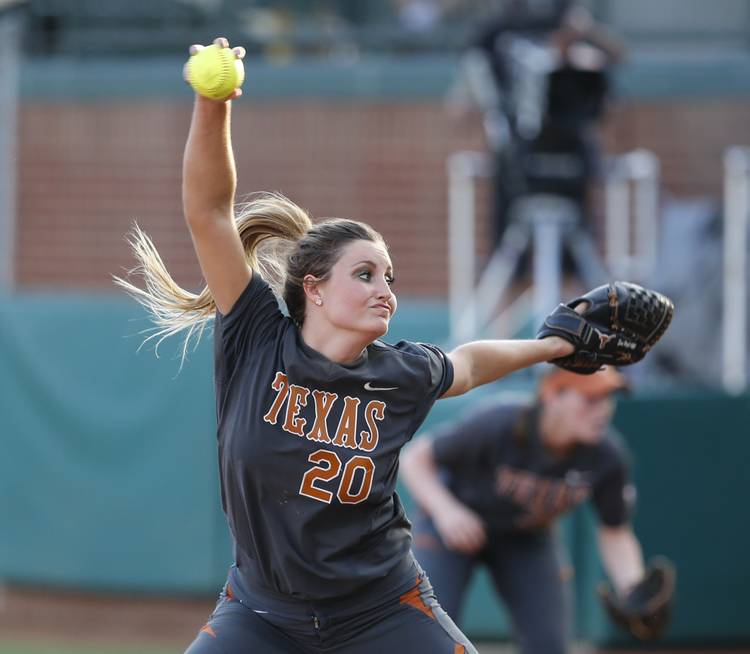 Texas pitcher Erica Wright throws from the mound in the first inning against Baylor in 2015. Wright, missed all of the 2016 season with a rib injury.

When Erica Wright took the mound, she was nervous.

Can you blame her? Pitching against No. 16 Minnesota could give anyone jitters, but there was more behind her anxiety. She was about to pitch her first game in a year. She missed the 2016 season with a rib injury, and she didn’t start throwing until October.

Her adrenaline was pumping. Her stomach was churning. Then she threw her first pitch and it sailed over catcher Taylor Ellsworth’s head.

That began a rough first inning. Wright walked four batters. The Longhorns committed an error. Minnesota scored three runs. Wright struggled with her command but was kept in the game in Texas’ 5-2 loss to the Golden Gophers.

“I had to get out these first game jitters,” Wright said.

She settled down. Wright walked only one more batter, registered two strikeouts and didn’t allow another run.

The Longhorns (1-1), who opened the season with a win over Colorado State earlier Friday afternoon, had their opportunities. Texas did score two runs — one in the third inning, on a Devon Tunning sacrifice squeeze that brought in Stephanie Wong, and the other in the fourth on a Wong RBI ground out. But the Longhorns stranded nine base runners and drew out only four hits off Minnesota All-American Sara Groenewegen, who tied for the national lead in strikeouts last year.

In the bottom of the fourth, Texas had the bases loaded with no outs, trailing 4-1. The Longhorns managed only one run.

After the game, Wright said she felt no discomfort and no pain. And Texas can avenge the loss on Saturday; the Longhorns face Minnesota again on the second day of the Texas Classic.

“We gave them a lot of free chances,” senior Tiarra Davis said. “We beat ourselves.