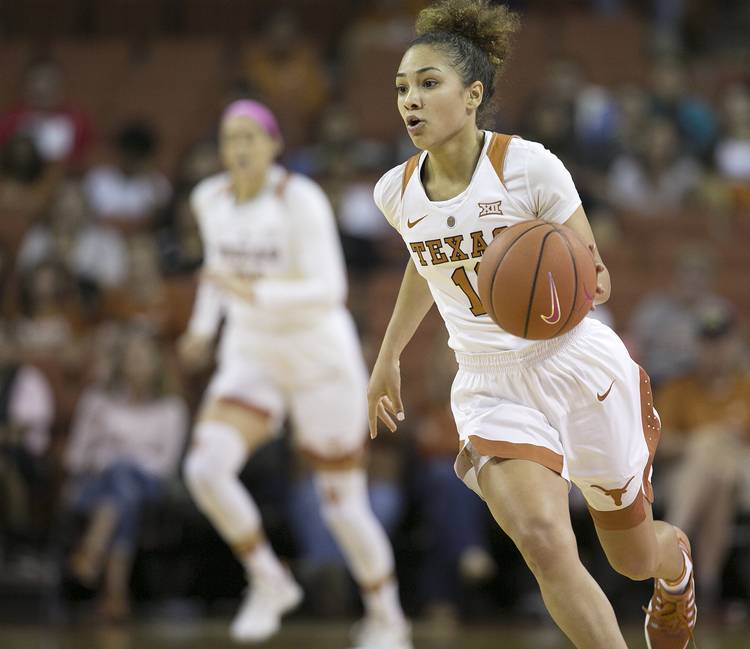 Texas's Brooke McCarty moves down the court against Kansas during the first half of their game at the Frank Erwin Center on Saturday, February 11, 2017. DEBORAH CANNON / AMERICAN-STATESMAN

Texas coach Karen Aston had no fear that the high of beating defending Big 12 champion Baylor on Monday would create a letdown against last-place Kansas.

The 11th-ranked Longhorns (20-4, 14-0) kept their competitive edge against the Jayhawks, ripping Kansas 75-42 to improve their winning streak to 18 games.

No chance for a Baylor hangover.

“The first indication for me was how we approached practice when we came back” from Waco, Aston said. “I feel like we play like we practice, and I didn’t see any type of letdown.”

This was a far cry from UT’s 66-54 victory over Kansas last month in Lawrence. In that game, Texas committed a season-high 31 turnovers. On Saturday, the Longhorns had only nine turnovers.

“The Big 12 is a very competitive conference, and you can be beaten by any team on a given night,” junior Brooke McCarty said.

Before the game, Lang and McCarty were recognized for scoring the 1,000th points of their careers. That was a particularly special moment for Lang, who did not arrive at Texas with the same All-America credentials that teammates such as Ariel Atkins and Holmes earned.

“I didn’t know how good a player I could be when I got here,” the 6-foot-5 post said. “The coaches obviously did a great job of helping me realize what I could do.”

Texas blocked a season-high 12 shots, the ninth-highest total in Horns history. Audrey-Ann Caron-Goudreau was active on defense, blocking five shots, all in the first half.

“I told Audrey at halftime to go get 10 blocks,” Lang said.

Texas outscored Kansas in every quarter, leading 17-10 after one period and 36-18 at halftime.

“The second piece of our improvement from the last game that we played them is that our young players executed things really well today, and that means that we are growing and we are getting better as a basketball team,” Aston said.

Before the game, former Longhorn Clarissa Davis-Wrightsil had a private discussion with the players in the locker room. She noticed that Holmes wears jersey No. 24, her number when she played for the Longhorns

If Holmes continues to improve, she should join Davis-Wrightsil as one of UT’s all-time greats.

Holmes said she wears No. 24 because her favorite player wears it.

Oklahoma State 84, Texas 71: Longhorns fall to 0-8 on the road this season