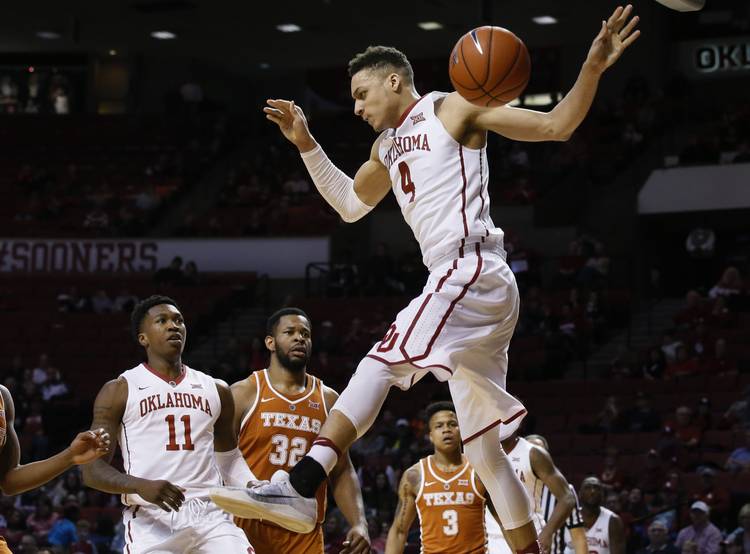 NORMAN, Okla. — Wilted flowers, half-eaten chocolates or just forgetting about Valentine’s Day all together would’ve been better than this crummy date night at the Lloyd Noble Center.

Oklahoma’s Jordan Shepherd drilled a clutch 3-pointer and the Sooners hit some key free throws in the final 29 seconds on Tuesday to secure a 70-66 win over Texas, a rudderless group that may be headed into a free fall.

The Longhorns (10-16, 4-9 Big 12) came out full guns blazing after halftime and took an eight-point lead. But again, as if trapped in some never-ending loop, they went into their patented scoreless funk — this one lasting 6 minutes, 25 seconds. That was plenty of time for the Sooners (9-16, 3-10) to come roaring back.

Oklahoma, the last-place team in the Big 12 standings, captured all the momentum with a 14-2 run and had a random collection of 4,074 souls jumping for joy. Texas picked up its crushed heart and limped home with an 0-9 record in true road games.

Four players finished in double figures, including Jarrett Allen who had 17 points and 10 rebounds. Roach was back in the scoring column with 13. The Horns even shot 47 percent. But they were again dreadful at the free throw line (7 for 16) and frankly got outworked by the Sooners. Allen is 1 for 15 at the stripe in the last two games.

Texas coach Shaka Smart purposely doesn’t lash out in public settings, but it was obvious he was seething.

Senior Shaq Cleare also tried to downplay whether or not players were angry about UT’s plight. It’s is the second straight road loss, and if the players give up now, this team could get really embarrassed in the five games left in the regular season.

Texas still has games at No. 9 West Virginia and home dates with No. 3 Kansas and No. 4 Baylor remaining, among others.

“I wouldn’t say anger,” Cleare said. “Now there might be a little frustration here and there because of all the work we put in. We’re a lot better than we’ve been playing. There’s still time. We’ve just got to fix a few more things and we’ll be fine.”

If there was a perfect opponent ripe for the taking, it was Oklahoma. The Sooners just lost senior Jordan Woodard, an inspirational leader, to a torn knee ligament. School officials put together a highlight tape with all of his career stats and included a “Thank You Jordan” message at the end of a classy tribute.

On a night when OU needed someone to step up, in came Jamuni McNeace. The sophomore had averaged 3.8 points and 3.8 rebounds in 24 games as a reserve this season. He had 14 points and 14 rebounds against the Horns.

At times, both teams were turn-offs. Andrew Jones had five of UT’s eight first-half turnovers. The Horns shot a sizzling 61 percent through 20 minutes but had only a 39-38 lead. OU had 11 offensive rebounds before the break and went 10 for 14 at the free throw line.

Texas clearly learned its lesson from last Saturday’s loss at Oklahoma State. This time, the Horns were the aggressors after the break. Allen dunked home Roach’s miss, and Eric Davis Jr. scored on an electric left-handed layup.

But Roach’s basket with 15:30 remaining were the last points UT would see for a while. McNeace scored twice and then threw down a dunk off a baseline move that gave OU a 53-49 lead with 9:37 remaining.

“We’ve seen that before,” Smart said, referring to yet another opponent’s big runs. “We have to gain a level of maturity of understand what goes into it at that given moment. We lack that.”

The Longhorns made only four field goals in the last 5:35 as the Sooners built an eight-point lead.

“We were doing everything right,” Roach said. “But it’s one of those droughts where we lose all focus on what goes into winning. We can’t lose our focus.”

Scouting the Fabulous 55: No. 50, running back Keaontay Ingram