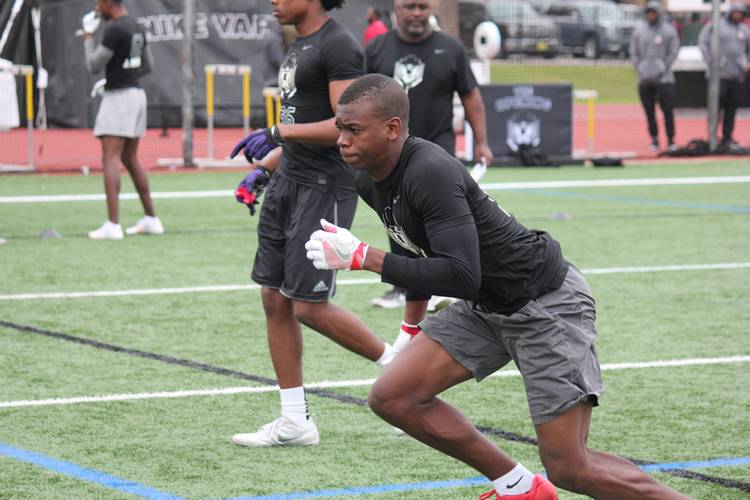 Tom Herman’s first junior day as Texas’ head coach is Feb. 25 and the Longhorns have yet to secure a single commitment for the 2018 recruiting class.

But it’s no time to panic. Texas is in position to land some of the top players in the state as well as a few select prospects from outside the state.

There are no excuses for this cycle. Herman and his staff will have a full calendar year to form UT’s 2018 class. The two national signing day misses of 2017 — Galena Park North Shore defensive lineman K’Lavon Chaisson and Austin Westlake offensive lineman Stephan Zabie — both chose to sign with out-of-state schools, and both alluded to the newness of the Texas staff as a partial reason.

Still, there’s optimism in the numbers. It wasn’t that Texas’ 2017 class, which ranked 26th nationally, was bad as it was small; only two programs — No. 14 Stanford and No. 16 Clemson — ranked ahead of the Longhorns in 247Sports’ composite ratings who had fewer players than UT’s 18-player class. But combine the numbers with a lack of star power, and the 2017 class was considered a dud even if it doesn’t turn out that way.

This 2018 cycle offers Herman a chance to build his first marquee class. He has numbers at his disposal and the Longhorns are already listed among the top schools of several members of our Fabulous 55. A junior day allows a program to orientate potential student-athletes with academics and sports. It’s unclear whether Texas walks away with commitments on that day, or even before, but here’s an early wish list of 2018 targets that Texas deems high priorities.

Update: The state’s top player says UT will always be among his favorite schools as he glides through the recruiting process. His cousin, cornerback Eric Cuffee, is already at Texas and is sure to be in Cook’s ear throughout the cycle. Cook plans on attending Texas’ junior day, and he’s already received an invitation to The Opening Final this summer. At 6-1, he combines a cornerback’s speed with a wide receiver’s length. That slender build is misleading because he doesn’t mind being physical in coverage or run support. Cook is the most sought after cornerback prospect in the state and holds offers from nearly every major Power 5 program in the nation.

Update: If not for Cook, Foster would be the top target in the state. He’s been a two-way player at the prep level, starting at running back and safety for Angleton. He’s likely a safety in college and he’s high on the Longhorns heading into junior day. Foster is a rare athlete for his size. He can run with wide receivers and hits like a linebacker. Safety is a need position for the Longhorns and Foster’s coverage ability would be a welcomed addition to UT’s secondary. An MCL injury he sustained during the 2016 season prevented him from participating at The Opening in Houston recently alongside Cook and other top talent in the state.

Update: Moore was ranked No. 7 player on our initial Fab 55 before announcing his move to IMG Academy in Florida from Yoakum. His twin brother has pledged to Texas A&M, but Moore has let it be known that he’ll pick the best school for him and that Texas is one of his favorites. At The Opening, he pointed out that his cousin, Oscar Giles, is a member of the Texas staff. He also referred to Herman as a father figure during an interview in Houston. Moore is a smooth receiver who can play outside due to his length or in the slot because of his quickness. Recruiting him might be harder now that he’s in Florida, but Texas feels like it’s in good position. He’s expected to attend junior day.

Update: Texas wants at least one quarterback for the 2018 class and the early favorite to become the leader of the class, at least right now, is Thompson. He’s an Oklahoma native with family ties to the Sooners program, but Bob Stoops already holds a quarterback commitment for 2018. That means Thompson likely will end up elsewhere. Thompson is the type of quarterback Herman tends to favor, a dual-threat quarterback who can hurt defenses with his arm or his legs. It’s never easy for Texas to sign an Oklahoman, but Thompson said UT was a “dream offer” and a logjam for the Sooners could mean good news for the Longhorns. He’s expected to attend junior day.

Update: Texas didn’t sign a defensive tackle in 2017. Herman won’t use many scholarships at defensive tackle in 2018, but he wants at least one. Avery is a high four-star player at a school the Longhorns would be well served to build a pipeline. Bishop Dunne is loaded with talent each cycle and Texas could use as many leads into the DFW recruiting hotbed as possible. Avery is a big-bodied tackle with the ability to play one- or three-technique. He forces double-teams and is tough to move from the point of attack because of his strength and low center of gravity.

Scouting the Fabulous 55: No. 50, running back Keaontay Ingram