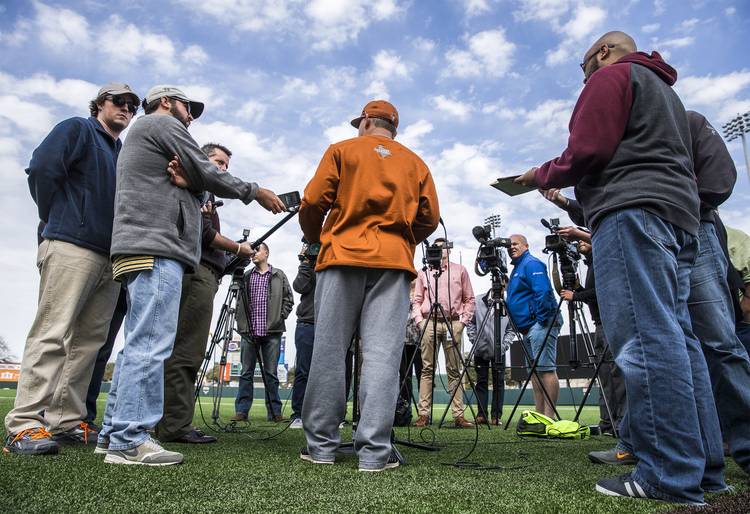 Two weeks ago, Cliff Gustafson and Augie Garrido were both at UFCU Disch-Falk Field for the Texas baseball team’s annual alumni game.

They won 2,290 combined games at Texas, but neither was working that Saturday. The position that Gustafson and Garrido held at UT from 1968 till 2016 now belongs to David Pierce, who was hired away from Tulane last June to replace Garrido.

Pierce played host that day to about a dozen professional players, all of whom had played for Garrido. The homecoming weekend — an offseason finale before many of the Texas Exes reported to spring training — allowed the former players to meet Pierce and gauge the direction the baseball program is heading.

Several of them said they liked what they saw from the new coach.

“It’s different, but I think it was time. A new face, a new life, new energy,” said pitcher Ty Culbreth, who was drafted by the Colorado Rockies in 2016. “Coach Pierce is one of the best in the country and I think that Texas made a really good pick with him.”

Ben Johnson, now an outfielder in Kansas City’s farm system, said that Pierce had done a good job of connecting with the ex-players. Johnson recalled an alumni golf tournament last fall in which Pierce stopped by each hole to chat with all of the players. Drew Stubbs, who recently signed a minor-league deal with Minnesota, also credited Pierce for his outreach, and added it was important for alumni to have active roles with tradition-rich programs.

“You see during the end of the college football season how a lot of the former Alabama football players are coming back and practicing with the current team in preparation for bowl season,” Stubbs said. “I think the more people you can get involved and bring back, the more it unites and strengthens the program.”

Pierce’s inaugural Texas season opens on Friday with a four-game series against Rice.

With her record-setting run, Hamilton joined a select group of athletes on Texas’ roster. Only four active Longhorns own individual indoors records at Texas — seniors Senoj-Jay Givans (60 meters) and Byron Robinson (600 yards), and Hamilton and sophomore Teahna Daniels (60-meter dash). Robinson and classmates Aldrich Bailey Jr., and Chris Irvin both ran on the best indoor 1600-meter relay team that Texas has assembled. That quartet was timed at 3:04.41 at the Tyson Invitational in 2016.

Options aplenty: Texas entered the softball season with five pitchers vying for innings, and each was showcased at last weekend’s season-opening Texas Classic.

Texas went 3-2 at the Classic, which also featured Colorado State, Maryland and Minnesota. Brooke Bolinger, Kristen Clark, Tiarra Davis, Paige von Sprecken and Erica Wright each earned starts for Texas, and four of them also made one relief appearance. Clark pitched twice out of the bullpen.

Bolinger pitched a team-high eight innings at the Classic, and none of her teammates bested her 1.75 ERA. Clark and Davis are tied for the team lead with seven strikeouts.

“I thought for the most part, the pitchers did a pretty good job,” Texas coach Connie Clark said.

Texas will need to decide which of its pitchers will be starters and which will be relievers, and those roles could be further defined at this weekend’s Texas Invitational. Texas welcomes Indiana, Louisiana Tech and South Carolina to town, and the Longhorns will play five times over the course of three days. Clark said she will take a more traditional approach to the way her team uses its pitchers at the Texas Invitational.