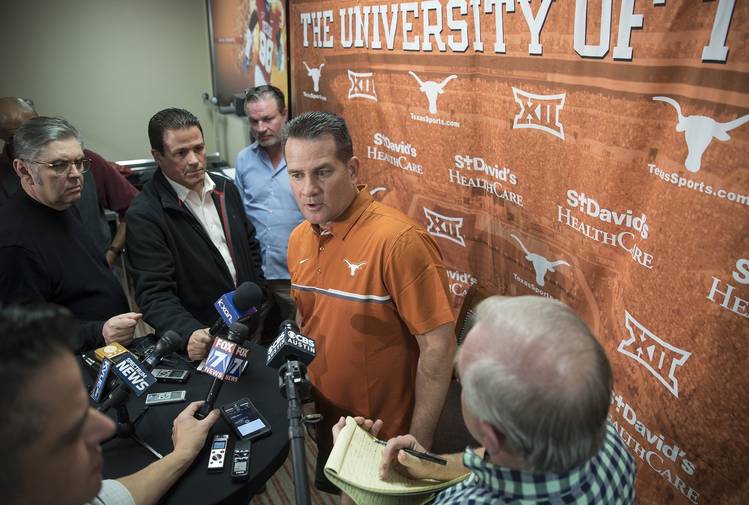 More than a month before making his Texas head coaching debut in 2014, Charlie Strong said that if his coaching staff bleeped this up, “We have no one to blame but ourselves.” Three years later, he’s now coaching at South Florida.

Reporters got to meet new coach Tom Herman’s offensive staff on Thursday, and to no one’s surprise, they feel the exact same way.

It’s crystal clear that Herman’s assistants understand how the Longhorns logo sewn onto their golf shirts has broad, powerful appeal. But it’s also a brand that’s been damaged by three straight losing seasons and incredible staff turnover. They all acknowledge this latest UT rebuild won’t be easy.

“What we perceive Texas to be is not where it is right now,” running backs coach Stan Drayton said. “It’s not the Texas that we know it to be right now. If that’s not motivation enough, when you come to a place where you’ve got all the resources, you’ve got all the support, you’ve got everything you freakin’ need and you’re sitting in a hotbed of talent, it makes you hungry.”

Drayton, who left the Chicago Bears to become an associate head coach at UT, was just getting warmed up.

“If you have a competitive spirit about you, just a little bit, you want to be the one to get this place back to where it used to be,” he said. “You want to have your name on that, as a player and a coach.”

New receivers coach Drew Mehringer was the offensive coordinator at Rutgers last season. He, like Herman, Drayton and the other staffers, don’t really care what happened last season. “Let’s evaluate the situation where we are right now,” Mehringer said.

If Herman’s favorite word — “alignment” — was said once on Thursday, it was said a thousand times.

“The mood of the (coaches meeting) has to be one that is constantly honest and constantly evaluating what we have done, good or bad, and are we winning or not?,” Mehringer said. “And if we’re not, why are we not?”

During Thursday’s hour-long session, there wasn’t much talk about individual players or even Xs and Os, really. Offensive coordinator Tim Beck did say he’d like to have more depth at quarterback. This spring, it’ll be sophomore Shane Buechele and freshman Sam Ehlinger battling it out. If third-stringer Matthew Merrick can hold his own, the Longhorns likely won’t go looking for a summer grad transfer.

The quarterback will preside over a predominately no-huddle offense, Beck said. Also, he said Jerrod Heard will start spring practice at receiver. There are currently no plans to pull him back over to quarterback. Spring practice begins March 7.

Drayton is high on running back Chris Warren III, among others in the backfield. Offensive line coach Derek Warehime got bug-eyed just mentioning left tackle Connor Williams’ ability. Mehringer praised Collin Johnson, and as for John Burt’s disappointing 2016 season, “Everything in the past is the past,” he said.

It’s also clear they are keeping an open mind. Herman has said numerous times there is no depth chart and he hasn’t watched any film from last season. Same for Beck.

“I don’t want to evaluate a kid who’s a true freshman in an offense we aren’t even running,” Beck said. “That doesn’t make much sense. I’m going to look at it and start saying, ‘Well, he can’t do this. Can’t do that.’ I don’t know what he was taught. I don’t know what they were doing. That’s not fair to that kid.”

Some of these players may be hesitant to open up, too. The receivers are on their fourth position coach in four years. The offensive linemen are listening to a third different coach in as many seasons.

Herman and his staff will provide stability, or so it’s hoped.

“They’ll do whatever you ask of them as long as they know you have their best interest in mind.”