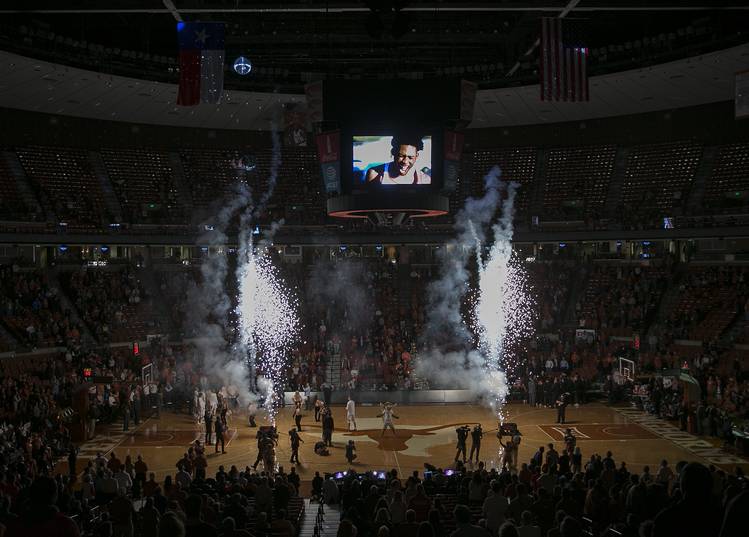 Texas players are introduced before their game against Oklahoma State's during the first half of play at the Frank Erwin Center on Wednesday, January 4, 2017. DEBORAH CANNON / AMERICAN-STATESMAN

Strictly from the oddsmakers’ perspective, Saturday’s home date with Kansas State is Texas’ best chance at victory in these final five regular-season games.

Texas (10-16, 4-9 Big 12) will not make the NCAA Tournament as an at-large selection. The odds of UT winning the Big 12 tournament are microscopic at best.

This is headed toward the program’s worst finish since the dreadful 11-17 campaign 24 years ago under Tom Penders.

Still, ever the optimist, senior Shaq Cleare refuses to give up on the season. “This is the point in the season where you can’t get frustrated,” he said. “You still have a chance.”

Tuesday’s 70-66 loss to Oklahoma, currently in last place in the Big 12 standings, was different, though. OU’s Jamuni McNeace, a player known only to his family and Sooners diehards, rose up to score 14 points and grab 14 rebounds. That dropped Texas to 0-9 in true road games this season and 0-12 in all games played away from the Erwin Center.

What’s actually odd about those stats is how well UT has done at home. The Longhorns are 10-4 in Austin this season.

How much gas is left in the Longhorns’ tank? A nail-biting 67-65 win over Iowa State on Feb. 7 may have been the moment this team peaked.

“Peaked? No,” Smart said after the OU loss. “We’ve had some good wins recently, but I think when we peak is when everyone on this team decides that they care about winning more than anything else. That’s when you peak.”

Smart says that all the time, but what does it even mean?

“Just play for each other,” guard Kerwin Roach Jr. said. “Lock in on defense. Be aggressive. Pulling for one another. Talking. Energy.”

At this point, there is little Smart can say or do. Either the players themselves want to finish the season on an uptick or they don’t. That alone makes Saturday’s matchup so intriguing.

Texas jumped out to an early lead against K-State in Manhattan. But a few bad passes, some missed block-outs and points allowed in transition added up to a 65-62 loss on Dec. 30.

It was one of many winnable games this season that ended up in the loss column. The Horns scored 38 points in the paint, won the rebounding battle 36-29 and even had five steals.

But there was an eight-minute stretch when things went haywire; Texas had multiple turnovers and racked up a season-high 26 fouls. Despite all of it, K-State still had to nail nine of 10 free throws in the final 59 seconds to win.

Fast forward to last weekend, when Texas had some of the same type of mistakes in an 84-71 loss to Oklahoma State. And sloppy ball-handling was a key reason why Texas lost 70-66 at OU.

“The ceiling for the team is tremendous. This team is not even close to peaking,” Cleare said. “But I’m not going to make excuses for these guys. There are still some things we have to work on in order to be where we want to be.”

K-State (16-10, 5-8) has lost three straight at the Erwin Center but looks to sweep the regular-season series for the first time since 2013.

With a win over OU, streaking Texas women’s basketball would go so retro