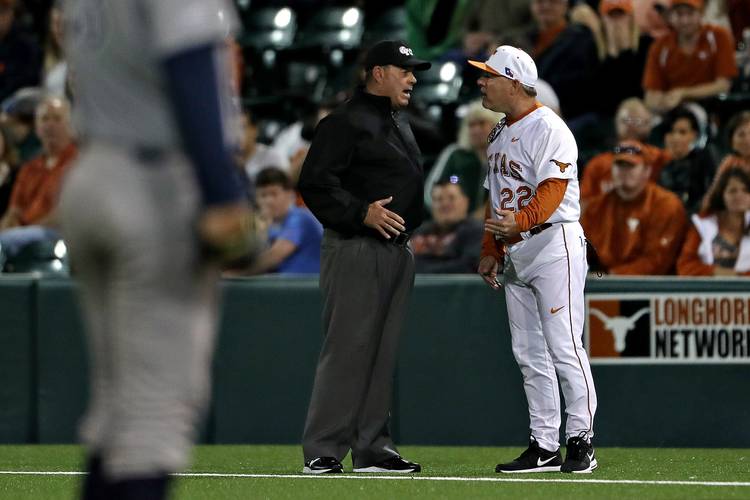 First base umpire Doyle Sooter and and Texas Head Coach David Pierce argue over a call in the 8th inning in the first game in a series against the Rice University Owls at the University of Texas' UFCU Disch-Falk Field in Austin, Texas on Friday February 17, 2017. Daulton Venglar/AMERICAN-STATESMAN

The first words of the David Pierce chapter in Texas’ book of baseball will include a loss.

Texas wasted a couple of offensive opportunities and Dane Myers scored twice for Rice in a 3-2 win over Texas at UFCU Disch-Falk Field on Friday. With the one-run conquest, the Owls dealt Pierce — who was an assistant at Rice in 1991 and again in 2003-11 — a loss in his debut as the head coach of Texas’ baseball team.

Pierce, who replaced Augie Garrido in June after spending the past two years at Tulane, is just the sixth person to lead the Longhorns since 1911.

“It’s just great to be a part of this program,” Pierce said. “Of course, we would have liked to (have) won the game, but we’ve played one ballgame. We’ll be ready to go again tomorrow.”

Texas and Rice were locked in a 2-2 tie when Myers led off the ninth inning with a single. Myers, a junior from Katy, moved over to third base on a passed ball and a sacrifice bunt, and Darryn Sheppard drove in his teammate on a groundout.

Evan Kravetz and Zach Esquivel then retired the Longhorns in order to secure the win.

Myers’ second run of the evening gave Rice its second lead. The Owls held a 2-1 edge after Dominic DiCaprio delivered a two-run double in the sixth inning. Texas, though, responded in the bottom half of the inning with Kody Clemens’ solo shot over the fence in right field.

“After the two runs they scored the inning before, I’m glad that we put a run back on just to bring something back and get the momentum back in our direction,” Clemens said. “Unfortunately, it wasn’t enough.”

Kacy Clemens, the older brother of Kody, drove in Texas’ other run on a sacrifice fly in the second. Texas outhit the Owls 7-4, but five Longhorns were left on base. Texas had a runner reach second base in the seventh and eighth innings, but the team could not get a third run on the scoreboard.

“I like the lineup; I like the approach,” Pierce said. “I think we’d like to have a couple at-bats back, maybe a couple of pitches that we took or swung at. Overall, I think we’re going to build on that.”

Myers’ single was the only hit that Texas sophomore Nolan Kingham surrendered over his three innings of relief. Junior Morgan Cooper gave up three hits in a six-inning start. Opposing Cooper on the mound was Myers, who yielded four hits and two earned runs before moving to third base in the seventh inning.

Rounding the bases: Texas junior Kyle Johnston will throw against Ricardo Salinas in the first game of a doubleheader on Saturday afternoon. Texas is set to give freshman Blair Henley the baseball against Rice’s Matt Canterino in the second game. … This is the first time since 2006-07 that Texas has dropped season openers in consecutive years. The Longhorns started their 2016 campaign with a 4-3 loss to UNLV. … The son of ex-Longhorn Shane Reynolds, freshman third baseman Ryan Reynolds, got the first hit of his career with a seventh-inning single. … An announced crowd of 6,197 was at UFCU Disch-Falk Field.

With a win over OU, streaking Texas women’s basketball would go so retro