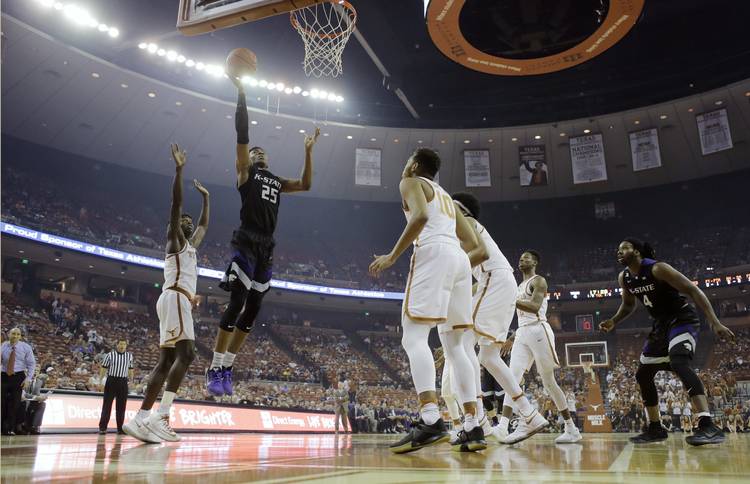 Shuffling through the exits while muttering in frustration, Texas fans could easily forget about the little things. Like walking itself.

That’s really all Mareik “Mo” Isom cared about last fall. A simple arthroscopic procedure on his left ankle was supposed to go off without a hitch. But Isom developed a nasty infection, one that required a small catheter to be inserted into his arm that “snakes up and it shoots medicine straight into your heart or something,” he said.

Instead of knocking down 3-pointers this season, Isom was literally knocked off his feet. That’s not how the Bowie graduate envisioned his senior season back home as a graduate transfer from Arkansas-Little Rock.

Isom gave the Longhorns a real boost on Saturday against Kansas State, hitting a 3-pointer and blocking a shot moments after a hard foul on Jarrett Allen created a little dust-up. It was Isom’s best game of the year, but Texas still fell 64-61 on Saturday at the Erwin Center.

“It wasn’t even really about the shots or whatever,” said Isom, who finished with eight points on 3-of-3 shooting with four rebounds in 16 minutes. At one point, Isom subbed out and got a strong ovation from the announced crowd of 11,318.

“I was just happy I was able to move, play defense and fly around,” he said. “Hopefully I can keep my health and my ankle stays up to where if I get put in, I can play as well as I did today.”

Isom’s infected ankle was so far outside the mainstream, even UT coach Shaka Smart said, “I never heard of an injury like that.” Isom didn’t get to play at all until Jan. 14 against West Virginia. He’d never gone longer than 4 minutes until Saturday.

Against Kansas State, Smart noted that Isom “was really, really active, flying around. If we get five guys playing like that, that’s what we really envision.”

The Wildcats (17-10, 6-8) had a nine-point lead in the second half as the Horns appeared to be cruising toward another sleepy blowout. Then, apropos of nothing, K-State’s Austin Budke tried to undercut Jarrett Allen underneath the basket with 12:35 remaining. That woke the place up.

Officials ejected Budke for a flagrant-2 foul, and Texas players Dylan Osetkowski (a transfer who is sitting out this year) and Isaiah Hobbs (a walk-on) were ejected for leaving the bench area.

On the ensuing possession, Isom drilled a 3-pointer from the corner, making it a five-point game. Then on the other end, Isom came flying at D.J. Johnson and blocked his shot into the stands. By this point, UT fans were at full throttle.

“We don’t want to hurt anybody, and Austin doesn’t want to hurt,” said K-State coach Bruce Weber, who thought Budke deserved a flagrant-1 foul — merely a technical and not an ejection. “We had to be physical. We had to play hard.”

Isom’s energy sparked teammate Andrew Jones. The freshman was mired in a forgettable performance until he unleashed an off-balance 3-pointer with 3:52 remaining. That swished true, tying the game at 57-57. The two teams traded two baskets each, and the Wildcats called timeout with 8.6 seconds remaining.

Looking for the winning points, K-State’s Kamau Stokes missed a jumper and Johnson scored on the putback, drawing a foul on Kendal Yancy in the process. Johnson hit a free throw with 1.6 seconds left

Texas had one final chance, but like other late-game situations, it was a head-scratching moment. Kendal Roach Jr. took the inbounds pass, turned and dribbled, and the clock expired. Texas didn’t appear to have any real plan of attack.

“We pretty much screwed that up,” Yancy said.

Both Yancy and Isom, along with fellow senior Shaq Cleare, said they are responsible for being leaders in a locker room full of youngsters. It’s a team beyond the crawling phase, but one still learning how to walk the mean streets of the Big 12.

Isom is just ecstatic to be walking right along beside ’em.

“It’s been tough at times, especially with the foot and the losses and stuff,” he said. “Other than that, it’s been everything I could dream of.”

Texas bounces back from season-opening loss with doubleheader sweep