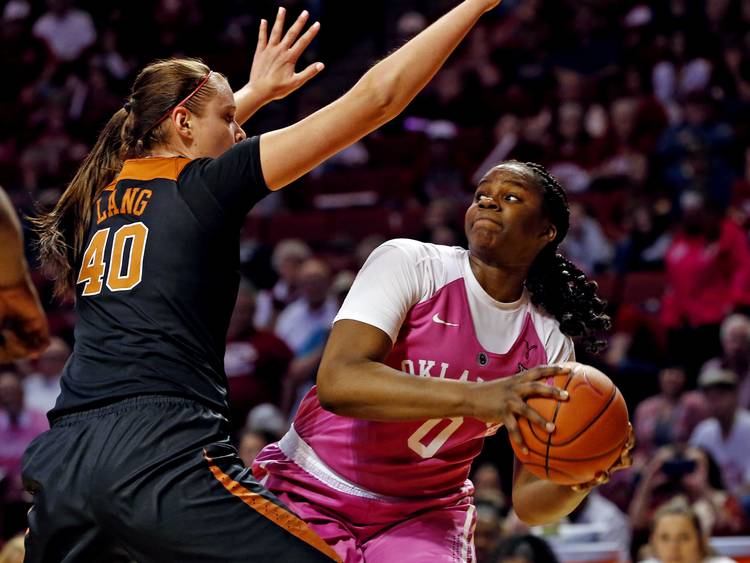 Oklahoma's Vionise Pierre-Louis looks for a shot as Texas' Kelsey Lang defends during the second half of the Longhorns' loss to the Sooners on Saturday in Norman, Okla. (Steve Sisney/The Oklahoman via AP)

NORMAN, Okla. — A 50-foot 3-point banker by Lashann Higgs at the end of the third quarter gave Texas life. A 3-pointer by senior Peyton Little with 2 seconds to play gave Oklahoma the game.

Little took an inbounds pass and drilled her bomb from the right corner to lift the 19th-ranked Sooners to a 74-73 victory over No. 8 Texas before 6,038 fans Saturday afternoon at the Lloyd Noble Center.

“I knew it was good the moment it left my hands,” said Little, who shook off an 0-for-13 performance last week against Texas Tech. “It’s a shot I’ve made a million times.”

Texas (21-5, 14-1 in the Big 12) saw its 19-game winning streak come to an end in its personal house of horrors. The Longhorns and Baylor are tied for the conference lead heading into Monday night’s showdown in Austin.

Little’s shot gave OU a 73-70 lead. Texas had a chance to tie the game in the closing seconds, but Sooners center Nancy Mulkey stole the inbounds pass, got fouled and made one free three to put the game on ice.

A buzzer-beating 3-pointer by Texas freshman Alecia Sutton was not enough to keep UT’s streak alive.

“We’ve talked about our team being resilient but (the Sooners) have been ultraresilient when you look at them on film,” Texas coach Karen Aston said. “They’ve had deficits where they came back and won, and the way they played today didn’t surprise me at all.”

There were 10 lead changes Saturday, and Texas appeared to received a big lift when Higgs hit her 3-point shot roughly 10 feet shy of midcourt. The shot momentarily silenced OU’s crowd and gave Texas a 59-56 lead heading into the fourth quarter.

“We had to let that go,” Little said. “How many times is someone going to hit that shot?”

OU, though, fought back behind center Vionise Pierre-Louis, who gave Texas a paint job, scoring a game-high 21 points on 8-for-12 shooting from the floor. The Sooners (21-6, 12-3) clawed all the way back and tied the game 70-70 on a driving layup by Gabbi Ortiz with 50 seconds to play.

Instead of regaining the lead, Texas committed a turnover to give the Sooners a final shot. And when Ortiz threw a bullet pass to a wide-open Little with the game in the balance, Little would not disappoint the home crowd.

Oklahoma coach Sherri Coale said her players and staff were energized by roughly 100 cancer survivors who attended the game. OU dressed in pink jerseys in honor of Kay Yow, the popular North Carolina State coach who died of breast cancer in 2009.

“This game was so good from start to finish that people were compelled to watch,” Coale said. “And the more you’re compelled to watch, the more aware you become of the Kay Yow Foundation. That’s a thing that can make a difference. Regardless of what your connection was to this game, you can’t help but appreciate the level of basketball that was played today.”

Brooke McCarty scored 16 points to lead the Longhorns, while senior post Kelsey Lang chipped in 13 points and eight rebounds. Lang said there was something missing from UT’s game.

“”We didn’t play for the whole 40 minutes,” she said. “We’re a team that’s really been focused on that for weeks and months now. We didn’t do that today.”

Aston said the players were “disappointed, and they should be.”

She said they need to regroup quickly to be ready for Baylor on Monday.

“I’m disappointed we didn’t play better today, but we still control our destiny,” she said. “We play home at the Erwin Center on Monday, so we’ll get ourselves ready.”

Kansas State 64, Texas 61: Despite loss, Mo Isom happy to be hustling at all