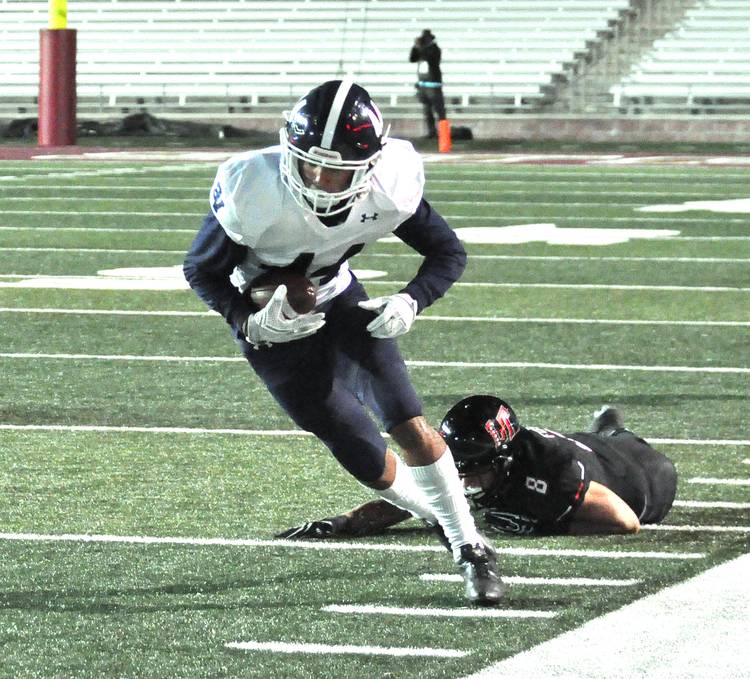 Smithson Valley's Trevon Moehrig-Woodard gets away from Lake Travis' Jake Foster on his way to a 60-yard touchdown in the second quarter of Friday's Area Playoff game in San Marcos. Jay Plotkin photo

Scouting Moehrig-Woodard: He plays the cornerback position with an unusual amount of aggression. That’s a compliment for a player who already holds double-digit offers despite not playing in a hotbed for recruiting. Players outside the big cities can get lost. Not Smithson Valley’s Moehrig-Woodard. The 6-1 corner flashes on film because of his versatility and physicality. He plays both cornerback and receiver for Smithson Valley, excelling at both, but he’ll likely be a corner in college. He could even play safety with some added weight.

Moehrig-Woodard’s recruiting stock has soared since the turn of the year. He’s picked up offers from Baylor, TCU and Stanford since the end of January. His length gives him an advantage at the line of scrimmage and when attacking a ball in the air. His experience at cornerback makes him a defensive playmaker. He’s also a big-play threat as a returner.

He’s a four-star recruit and the No. 25-ranked cornerback prospect in the nation, per 247Sports. In a year loaded with cornerback talent, he’s one of the underrated gems in this class. He’s a well-rounded player with a chance to make an instant impact on special teams and eventually become a starting cornerback at the Power 5 level.