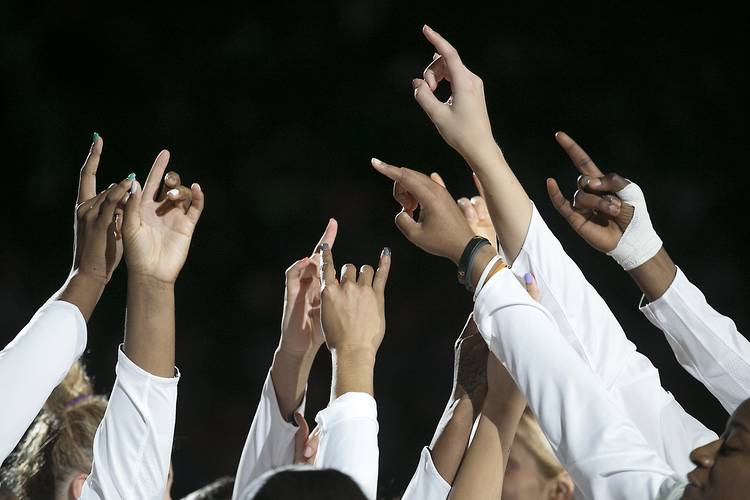 When Karen Aston and her basketball team set preseason goals, there was no discussion about long winning streaks or a victory over Baylor.

Texas has always been judged by rings and banners. The Longhorns enjoyed plenty of milestones in the old Southwest Conference but the Big 12 cupboard is nearly bare. Most of the conference hardware resides in Waco.

Billed as Big Monday by ESPN, no one will deny that Baylor-Texas at the Erwin Center is the most important game of the regular season … for both teams.

While Texas can take pride in its five-year ascension under Aston, winning a Big 12 regular-season championship is the first step to regaining a spot at the big table in women’s basketball.

Texas, which lost 74-73 at Oklahoma on Saturday, is tied with Baylor heading into Monday’s game. After winning 19 straight, the Longhorns will attempt to start a new one against their biggest rival.

Aston was an assistant coach under Jody Conradt in 2003, and said the conference championship ring she earned is “almost as coveted” as the Final Four ring from the same season.

Intrigue in the Baylor-Texas game in Austin grew after the Longhorns upset the Lady Bears 85-79 two weeks ago in Waco, snapping a 14-game losing streak to their bitter rivals.

A victory over then-No. 2 Baylor was certainly a highlight to remember. So was last Monday’s double-overtime triumph at No. 4 Florida State.

Yet through all of UT’s progress this season, Aston has steadfastly deflected praise, knowing there are more games yet to be played.

“We haven’t won anything yet,” she has repeatedly said.

For good reason, she doesn’t want to count her conference chickens until the season is over. Baylor has been the Big 12’s dominant team since the league formed in 1997, winning a total of 15 regular-season and tournament titles, five more than Oklahoma. Texas has been part of three championships.

Baylor is seeking redemption after suffering a loss to Texas on its home court. The Longhorns, who never trailed, broke a tie when freshman Joyner Holmes converted a basket with 59 seconds to play. Brooke McCarty played one of the best games of her career, contributing 22 points, five rebounds and four assists before a raucous crowd of 7,054.

Baylor coach Kim Mulkey applauded her team’s second-half comeback from a double-digit deficit, but complained that the Lady Bears did not play with urgency when the Longhorns built their lead.

Baylor responded well after the loss, beating TCU 91-73 in Fort Worth and Oklahoma State 89-67 Saturday in Waco.

Texas, meanwhile, must regroup after suffering its first loss since Dec. 2.

Texas senior forward Brianna Taylor said she was moved by a comment that former Longhorn All-American Clarissa Davis-Wrightsil told the team before a recent home victory over Kansas.

Taylor repeated the comment from the former NCAA Player of the Year on her Twitter page: “You can’t live on yesterday’s food. You have to eat daily.”

What does that mean?

“It’s a reminder to stay humble, stay hungry and keep striving for what your goal is at the end,” she said.

Texas splits series with Rice after sixth-inning collapse on Sunday