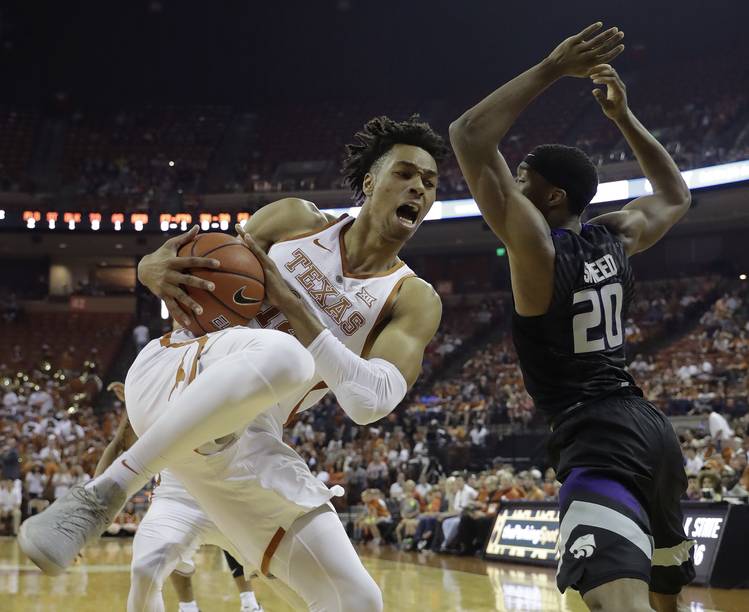 The last time Texas faced West Virginia, the Longhorns lost a close one.

Just as they lost to Kansas State at home Saturday. And to Oklahoma in Norman. And to TCU everywhere.

That’s almost become a badge of honor, albeit in a punishing league that has no time for close losers.

The latest defeat came at the Erwin Center, where the underachieving Longhorns usually can count on a semblance of respectability with a 10-5 record. There’s been no shred of that on the road where Texas has yet to win a game in 12 tries, either at opponents’ home gyms or neutral sites.

There will be nothing neutral about Monday’s game in Morgantown, W. Va., where the locals are 15-2 this year. West Virginia is one of four of the nine Big 12 schools that so far have swept Texas in basketball and football, the two major sports, this school year along with TCU, Kansas State and Kansas .

“We don’t have one on the year,” Longhorn super sub Mariek “Mo” Isom said of road victories after his breakout game in Saturday’s loss. “We try to keep a positive attitude.”

“We get five guys playing like that,” Smart said, “that’s the way we envision playing.”

Smart will need effort as Isom showed in his eight-point, four-rebound, two-block performance. He may be upset with falling to 10-17 on the year and 4-10 in Big 12 play, but the Mountaineers aren’t in a good mood either.

Bob Huggins said he was angry over his club’s five-minute scoring drought that forced his West Virginia team to have to beat Texas Tech in double overtime Saturday. And he’s still seething over blowing a 14-point lead against Kansas. Smart knows something about dissatisfaction.

“I told you (in preseason) it’s a building year,” Smart said.

And have you built anything?

“Yeah, big time,” the second-year Texas head coach said. “The first thing is, you’re trying to create a level of culture and ways of doing things. Your modus operandi. That’s something that doesn’t all come at once. I think our guys have made a lot of strides the last several months. Now that impact on winning, sometimes you see it sooner, sometimes later.”

And sometimes almost not at all. His modus is broken. Texas hasn’t won back-to-back games since opening the season with three wins over light competition. The Horns now must win the Big 12 Tournament to advance to the NCAA Tournament, but their last four opponents are a combined 84-24.

Starting four underclassmen doesn’t help any, as well as “sometimes not having maturity we need to have in certain situations,” Smart said. “We’ve played a lot of tough, close games and lost the majority of them. They’re tough pills to swallow, but it will benefit the guys moving forward.”

His players haven’t given up. A minor dustup Saturday when a Kansas State reserve undercut Texas’ Jarrett Allen fueled an emotional run, but that only merited another close defeat.

Senior Kendal Yancy thinks having to win the post-season tournament “affects us in a positive way because it lets us know there’s a sense of urgency. We don’t have any choice except to play harder.”

“It’s really hard for the seniors,” he added. “As soon as we start rolling, we’ll try to win the rest of the games here on out. There’s still hope. Any hope we can find, we’re going to run with it.”

Texas splits series with Rice after sixth-inning collapse on Sunday