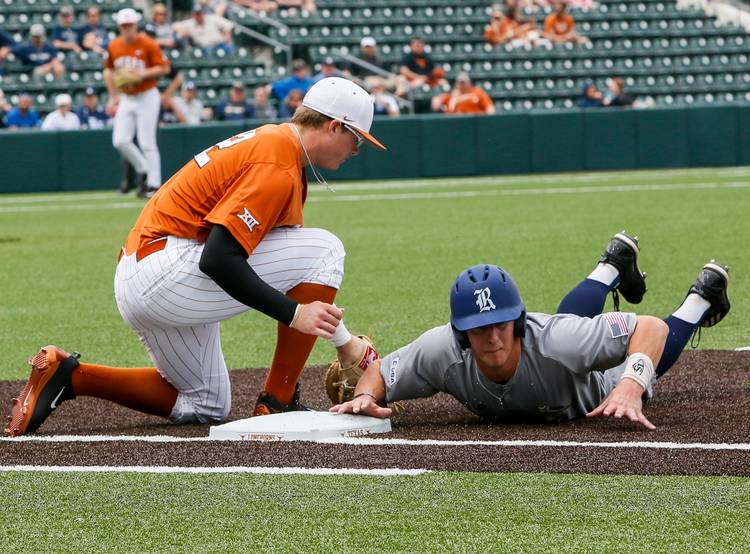 Ford Proctor (8) beats pick-off tag by Kacy Clemens (42) in the final game in a series against the Rice University Owls at the University of Texas' UFCU Disch-Falk Field in Austin, Texas on February 19, 2017 (Andy Nietupski for AMERICAN STATESMAN)

Even after losing 32 of the 57 games it played last season, Texas does not want to be considered average.

Rice used a five-run sixth inning to pull away from Texas in a 7-1 win at UFCU Disch-Falk Field on Sunday. The loss gave coach David Pierce a split in his first series at Texas, and the Longhorns open their 2017 season with a 2-2 record.

Afterward, the Longhorns weren’t celebrating their showing against the nationally-ranked Owls.

“I’m pretty sure anybody who plays this game wants to win every single game they play. If they don’t, then they shouldn’t be playing the game,” said senior Kacy Clemens, who stopped short of classifying the first weekend of the season as a “disappointing” one.

Texas was limited to four hits on Sunday, but Bret Boswell’s home run forced a 1-1 tie in the fifth inning. However, Rice (2-2) sent 11 batters to the plate in the following frame, collecting five hits and a walk with two Owls getting hit by pitches.

Texas was forced to go to its bullpen on three different occasions — the last pitching change was made in the middle of an at bat — and the Longhorns exited the inning in a 6-1 hole. When given a chance to respond in the inning’s bottom half, Texas was retired in eight pitches.

“We didn’t do things well today in one inning that cost us the game,” Pierce said.

Rice sophomore Dominic DiCaprio broke the sixth-inning tie with a bases-loaded double that plated two runs, and he later scored on Brad Gneiting’s two-run double. DiCaprio drove in Rice’s first run on Sunday with another double, and he also produced a two-run trip to second base in the sixth inning of Friday’s 3-2 win.

“He’s a different player this year,” Rice coach Wayne Graham said of his catcher. “He lost 25 pounds, and it’s all good weight. Now he’s got a six-pack. He throws fine, and he can hit. He had a good series.”

After Rice got its first two runners aboard in the sixth, Texas pulled starter Connor Mayes. A junior right-hander from Lake Travis, Mayes took the loss after surrendering four hits and three earned runs. However, Mayes was the only Texas starter to be credited with a loss this weekend, and the Longhorns got five- or six-inning appearances from each of their starters. (Morgan Cooper, Kyle Johnston and Blair Henley threw over the first three games).

Rice earned 15 of its 32 season-opening hits against Texas’ bullpen, and Longhorn relievers yielded runs in three of the four games. Texas used six pitchers on Sunday.

“I thought the starters were guys that gave us a chance to win and competed really well, and I don’t think they were as sharp as they can be,” Pierce said. “I thought the backside of the bullpen was not good at all. If we don’t improve that, we’re not going to do well in the latter part of the innings.”

Rounding the bases: Texas is off until a Wednesday road trip to Sam Houston State. Pierce, who spent 10 seasons as an assistant coach at Rice, was the head coach at Sam Houston State from 2012-14. … Texas outfielder Zane Gurwitz was sidelined by a hamstring injury this weekend. Pierce noted that Gurwitz was day-to-day but had not resumed sprinting. … An announced crowd of 4,658 was at UFCU Disch-Falk Field on Sunday.

Big 12 title on the line as Baylor, Texas clash in Austin