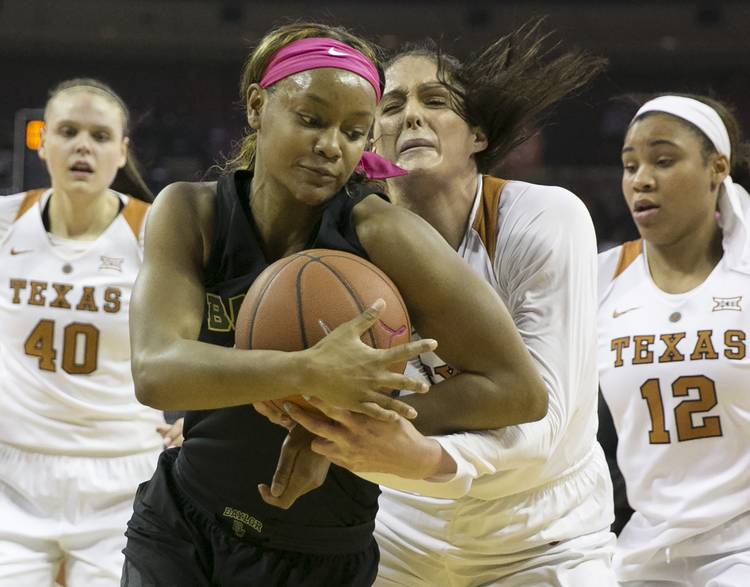 Baylor's Nina Davis, left, and UT's Audrey-Ann Caron-Goudreau fight for a loose ball in the first half at the Frank Erwin Center on Monday February 20, 2017. JAY JANNER / AMERICAN-STATESMAN

Baylor overcame an 11-point deficit and the loss of All-America candidate Alexis Jones to regain control of the Big 12.

The fourth-ranked Lady Bears took a big step toward their seventh straight conference championship by defeating No. 6 Texas 70-67 before a season-high 7,103 fans Monday night at the Erwin Center.

Baylor climbed on the back of 6-7 post Kalani Brown, who scored 35 points — exactly half of her team’s total — to help the Lady Bears avenge a loss to Texas earlier this month.

“I was demanding the ball, period,” Brown said. “I wanted to be a presence on the offensive and defensive sides.”

For Texas, which had the Big 12 lead before suffering consecutive losses to Oklahoma and Baylor, it was a heartbreaking ending. Coach Karen Aston said he team had “no answer” for Brown, who had 24 points in the first meeting against Texas.

Jones suffered a knee injury in the first half and went scoreless in nine minutes. She will have an MRI on Tuesday to determine the extent of the injury.

Across the court, Texas was dealing with its own problem. Senior center Kelsey Lang suffered an “eye injury” in the second quarter and left the game early in the third. On Tuesday, Aston said Lang is “day to day” but her injury status remains unclear.

After the game, Baylor coach Kim Mulkey responded to perceived criticism of her team and that Texas was ready to unseat the Lady Bears as conference champs.

“Everyone wanted to say we were stale food, there’s a new sheriff in town,” Mulkey said. “Look guys, when you’re a championship program, you go down fighting.”

Aston was told about Mulkey’s “new sheriff in town” comment before she addressed reporters.

“I’m well aware that we have to talk about sheriffs and all kinds of crap, but I thought we played really hard and we just didn’t win,” Aston said.

Texas, though, didn’t go down without a fight, either.

Baylor stormed back in the fourth quarter and led 65-56 on a layup by Lauren Cox with 1:23 to play. Texas fought back behind a pair of free throws by Ariel Atkins, a layup by Alecia Sutton and a three-point bomb by Brooke McCarty with 35 seconds to play, narrowing the lead to 66-63.

Baylor’s Brown and Kristy Wallace each hit a pair of free throws to keep Baylor afloat in the closing moments. The Longhorns had a shot to tie the game when Lashann Higgs stole an inbounds pass and fed McCarty for a three-point attempt with 2 seconds to go.

McCarty, who led the Longhorns with 16 points, missed and Baylor left the Erwin Center with its 15th victory over Texas in the last 16 games.

“Every person we bought off the bench had no experience from last year,” Aston said. “The thing about Kelsey is she just calms us. She calms us offensively, she calms us defensively, she has a presence about her and we definitely lost that. We had to start playing lineups that we hadn’t played before and we lost our comfort I think, on offense in particular.”

Mulkey, who received her first technical foul of the season within the first two minutes, said she “meant to get it.” She complained that Texas players were “flopping.”

A Texas-Baylor rematch will take place only if both teams reach the championship game of the Big 12 tournament, March 3-6 in Dallas.

West Virginia 77, Texas 62: Longhorns want to prove ‘we’re willing to fight for each other’