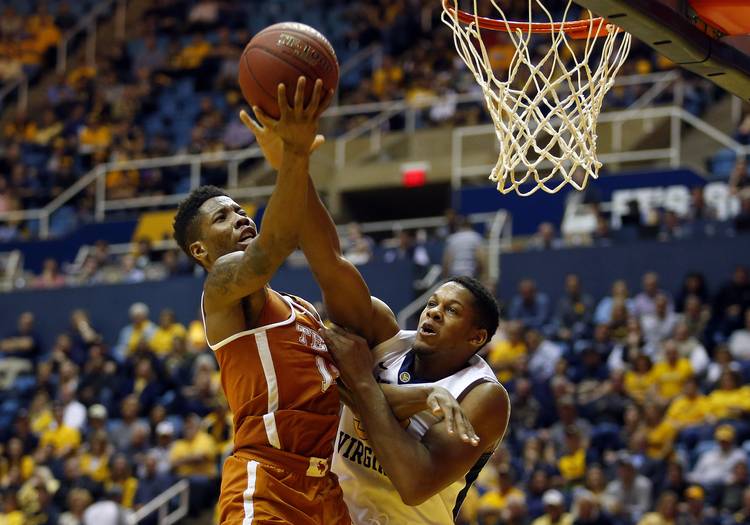 Kerwin Roach Jr. #12 of the Texas Longhorns is fouled by Sagaba Konate #50 of the West Virginia Mountaineers at the WVU Coliseum on February 20, 2017 in Morgantown, West Virginia. (Photo by Justin K. Aller/Getty Images)

MORGANTOWN, W.Va. — These ESPN “Big Monday” games leave players and coaches holed up in the team hotel for hours on end. The Longhorns spent the daylight hours Monday doing some soul searching.

Inside a conference room at the Waterfront Place Hotel, the players came together with nary a coach in sight. With only a few weeks left in this lost season, the Horns asked themselves a simple question.

“Why are you playing?,” sophomore Kerwin Roach Jr. said.

This players-only meeting wasn’t a cure-all, to be sure. Just hours later, No. 12 West Virginia would drill 10 3-pointers and cruise to a 77-62 victory over Texas at WVU Coliseum. But there was plenty of fight from start to finish, something that indicated this team still has a pulse, albeit faint.

“I think we need to prove it to ourselves that we’re willing to fight for each other,” Allen added.

In hopes of proving his point, Allen threw down one of the best dunks of the entire college basketball season — a spectacular, thunderous, one-handed posterization of Sagaba Konate. The announced crowd of 10,460 went into a stunned silence.

By halftime, the replay was plastered all over the internet.

“It was incredible,” Roach said. “I was surprised myself. It was big time.”

Unfortunately, Texas still trailed by 11 at that point. The Mountaineers (22-6, 10-5) had built up a sizable lead on the strength of a 25-3 run fueled by Lamont West.

Texas coach Shaka Smart picked up a technical foul along the way even though he was yelling at his own players to pick it up. Referee Darron George saw only Smart’s fist pump from clear across the other side of the court, apparently.

“Well, I think it was a misunderstanding actually because I was trying to fire up our guys. But, it is what it is,” Smart said.

West, a redshirt freshman from Cincinnati, came into the game averaging just 5.7 points. But he was 6 for 8 from 3-point range and had a season-high 23 points. “If you cheat the game, the basketball gods catch up to you,” WVU coach Bob Huggins said. “He’s in the gym all the time.”

West’s play and that of WVU junior Jevon Carter (24 points, 10 rebounds) were the talking points afterward.

Well, that and the fact Huggins dropped to his knees during a timeout. After some serious prodding by the locals, Huggins admitted his internal defibrillator accidentally went off, knocking the wind of out him.

Allen finished with 17 points while Eric Davis Jr. (17 points), Roach (13) and Andrew Jones (11) all tallied double figures. In the second half, the two teams were fairly even. WVU had a 31-30 scoring edge and both teams shot around 50 percent. It was that big first-half run that made the difference, Smart said.

All the way to the finish line, Texas players were jumping up off the bench for big plays and supporting their teammates.

“We focus on the things we can control, and one thing we can control is playing hard and fighting,” Roach said. “That’s one of our core values — competitiveness.”

Roach sounds he’d be more disappointed if the players did give up now. “I definitely would,” he said, “because that’s something you shouldn’t do.”

Smart did not travel home with the team. He’s headed to see prized recruit Mo Bamba, a 6-foot-11, five-star forward who studies at Westtown School in West Chester, Pa.

The players don’t seem to be giving up. The coach hasn’t given up on chasing another prized recruit. The beat goes on.

“I don’t think we’re going to let this stuff get us down,” Allen said. “Not at all.”