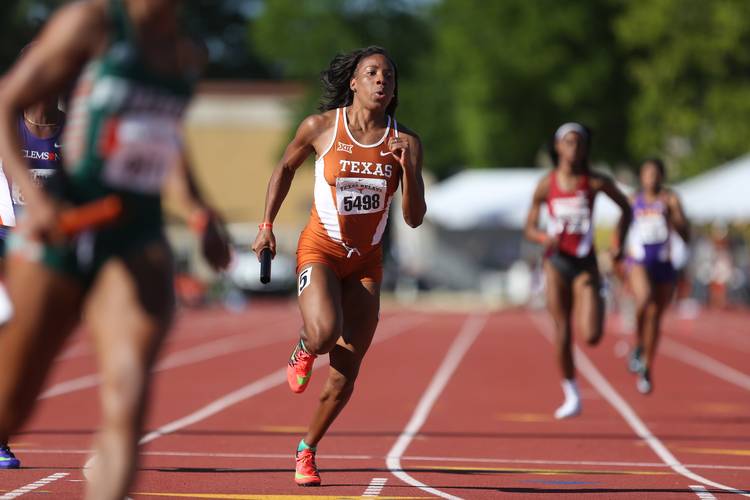 In search of two team titles, Texas heads to the Big 12’s indoor track and field meet this weekend in Ames, Iowa.

The Longhorns have two Olympians at their disposal. Chrisann Gordon won a silver medal at the 2016 Rio Olympics with Jamaica’s 1,600-meter relay team. And Byron Robinson represented the United States and placed ninth in the 400-meter hurdles.

On Tuesday, Gordon said she feels that she is “in better shape this year (than) at this time than last year.” She wasn’t pleased with her first meet of the indoor season, but her time of 51.71 seconds in the 400 on Feb. 10 is a mark that ranks third in the NCAA. Gordon said she rested for four weeks following the Olympics, and didn’t resume her training until late September.

“It was hard sitting down, watching my teammates training because I love training,” Gordon said. “It was really hard for me to sit for so long. Rest is important. Rest is very important for my body to repair and be normal again for another season.”

Robinson had a different approach to his post-Rio training. Fueling by his shortcomings there  — he missed out on a spot in his event’s final race by 0.01 seconds — Robinson opted to not rest much upon his return to the country.

“Don’t tell my coach, but I started the week I got back,” Robinson said. “I had to do some hurdle drills. Losing like that on a stage like that, it’s either going to kill you or make you stronger.”

Robinson didn’t make his indoor debut until Feb. 3. The Big 12’s reigning champion in the 600 yards, however, recorded the conference’s best time this season in the 400 just a week later (46.34 seconds).

From 2001-04, Herman coached wide receivers and special teams at Sam Houston State. The Bearkats had Pierce lead their baseball program from 2012-14. (Additionally, Rice once employed both as assistant coaches).

On Wednesday night, Pierce was set to reunite with the Bearkats as Texas made its first-ever trip to Huntsville. Pierce won 121 of his 184 games at Sam Houston State.

Recalled Sam Houston State athletic director Bobby Williams: “David comes in and wins three straight regular-season championships and then we got at-large bids into the NCAA regionals. He just did a really good job. I really enjoyed working with him. … Now he’s got the big job, and I’m really happy for him.”

Walk this way: In its 13-7 win over Indiana last Saturday, the softball team tied a school record by drawing 14 walks. Since it was playing at home, Texas did not bat in the seventh inning.

The Longhorns matched their 14 walks in a 2016 game against Toledo.

Eight different players had the 14 walks against the Hoosiers, though senior Stephanie Wong, who’s tied for the team lead, wasn’t one of them. Designated player Mickenzi Krpec earned four free passes, which fell just one walk short of the school-record five walks drawn by Nadia Taylor in 2012 and Taylor Hoagland in 2013.

Without looking back, new Texas defensive coaches focused on the future

Scouting the Fabulous 55: No. 26, running back Stanley Hackett