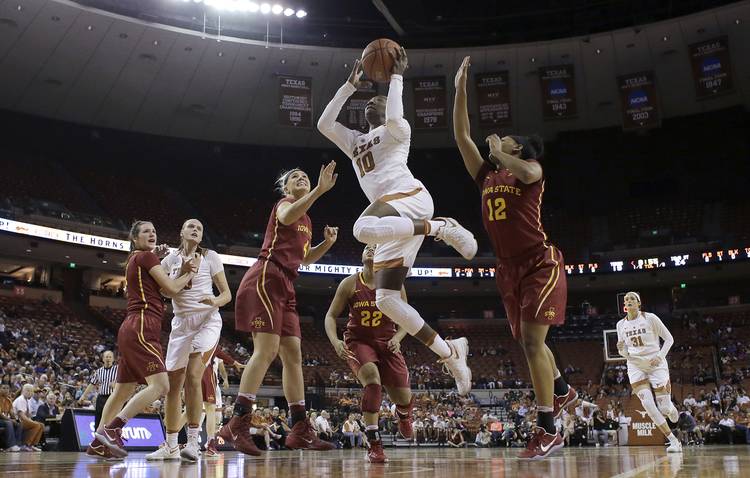 There is no way to measure a team’s urgency. On Friday, though, Iowa State clearly had it and Texas didn’t.

That was coach Karen Aston’s assessment after the Cyclones upset the sixth-ranked Longhorns 70-66 at the Erwin Center, spoiling Senior Night for Kelsey Lang and Brianna Taylor.

It would be easy to say the loss could hurt Texas when the NCAA Tournament seeds are announced next month. And it doesn’t bode well for the Longhorns prepare for the Big 12 Tournament next weekend.

Texas dropped to 21-7, 14-3 in the conference. For all practices, it ends UT’s bid for a regular-season championship.

On the other side of the court, Iowa State celebrated its biggest victory of the season. The Cyclones, who have won four straight, improved to 17-11, 8-9.

“This is one of the best victories we’ve had in a long time at Iowa State,” Cyclones coach Bill Fennelly.

Was it enough to get Iowa State back into the discussion for a possible NCAA bid. Fennelly would not express an opinion but said a victory against a “Final Four-caliber” opponent will look good on his resume.

Aston said she was not surprised the Cyclones repeatedly drove to the rim.

“It did surprise me we didn’t make adjustments,” she said.

An alarming trend on Friday appeared to be UT’s hesitation to take open shots. Freshman Alecia Sutton turned down a wide-open three pointer from the left corner with 1:30 play and eventually turned the ball over. Freshman Joyner Holmes also elected to pass when she was open.

“When people leave you wide open it kind of messes with your head,” center Kelsey Lang said.

Texas, which trailed 58-54 after three quarters, opened the fourth period on a 6-0 spurt and took the lead on a 10-foot jumper by Holmes.

Iowa State, though, countered with a 9-0 scoring run to regain control 67-60.

Texas climbed within 68-66 with 28 seconds to play and had possession of the ball. A driving layup by Ariel Atkins, though, missed its mark and Jadda Buckley rebounded the ball with 6.1 seconds play and was fouled. Her ensuing free throws  put the game on ice.

Iowa State’s victory spoiled UT’s Senior Night. Lang and Brianna Taylor were honored before the game as UT’s only seniors. Taylor scored 12 points to lead the Longhorns and Lang contributed a team-high 7 rebounds.

Texas will aim to snap its three-game losing streak Monday night when the Longhorns travel to Kansas State.