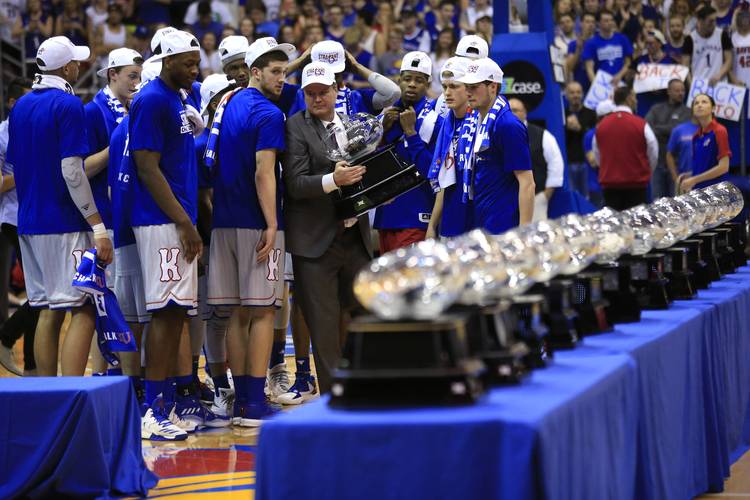 That black marking on Shaka Smart’s hand is not an X or a cross, although there has been an uptick in prayer lately. It’s a plus sign, something the Texas coach once said “reminds me to stay positive.”

That’s been an extraordinary challenge this season, too.

For the second straight year, Kansas comes to the Erwin Center having already clinched a share of the Big 12 title. A win over the Longhorns on Saturday would give the second-ranked Jayhawks (25-3, 13-2) the crown outright.

If anyone’s lost count, that’s now 13 consecutive Big 12 titles and counting for the gang that definitely shoots straight from Lawrence.

Coach Bill Self’s Jayhawks tuned up the Horns last season and left town with a 30-point win. They hit 11 of their 16 three-point shots. Jamari Traylor dunked a ball so hard, he nearly chipped a tooth. “I do think our guys had a lot of fun tonight,” Self said afterward.

This is routinely the biggest home game of the year for Texas fans. But there’s little to be excited about.

The Longhorns (10-18, 4-11) are headed toward their worst finish in decades. The NCAA Tournament is an extreme long shot; UT would have to win four games in four days at the Big 12 tournament. Smart himself now holds a losing record (30-31) in two seasons in Austin.

If anything, Saturday’s late afternoon clash is a strong, unmistakable reminder how far the Longhorns must climb just to get within shouting distance. After all, it’s a battle of the first-place team against a team hoping to avoid the cellar.

One Longhorn who should be ready to roll is freshman Jarrett Allen. Self wanted Allen just as bad as Smart. The 6-11 forward had one of his best games of the year at Allen Fieldhouse on Jan. 21 with 22 points and 19 rebounds, both season highs. He also scored 22 points against TCU.

“Jarrett Allen played unbelievable. Certainly we’ve got to do a better job on him,” Self said. “We totally respect Shaka and his staff and their players. We think they have good players. They’re just young.”

Allen has seen much rougher treatment in the second round of Big 12 play. Kansas State players mugged him. West Virginia’s whacked him, too. It’s hard to imagine UT’s remaining three opponents — Kansas, Texas Tech and Baylor — taking it easy on the Horns’ best player.

In the last 12 games, Allen is averaging a team-high 16.2 points and 9.2 rebounds while shooting 59 percent.

“I know they’re coming at me now,” Allen said after Monday’s loss at West Virginia. “They want to be rough with me. That just means I have to be aggressive on the offensive boards and just play harder. I’m fine with it. It’s only going to make me better in the future.”

The future. That’s an interesting topic with Allen and the Longhorns. With this season almost over, many are already looking toward next year. Will Allen return or jump into the NBA draft? What kind of improvement will Andrew Jones make? Can Eric Davis Jr. and Kerwin Roach Jr. sharpen their skills. Will incoming point guard Matt Coleman make all the difference? Or does this team still need more pieces?

For now, Texas will size itself up against a real basketball behemoth. It’s a long, long way to the top.

“It certainly creates an urgency for the rest of us to say, ‘We’re not there yet,’” Smart said.